Between July 2017 and June 2018, the success rate of ASIC Forex brokerage authorisation has reached 44% as it has granted 303 new licences and 455 licence variations.

March 1, 2019 | AtoZ Markets – The Australian Securities and Investments Commission (ASIC) has announced on Thursday that it has published an assessment report that describes the key regulatory issues. It also gives an overview of ASIC’s activities regarding licensing and professional registration applications between the period of July 1, 2017, to June 30, 2018, in the country.

During the one year period, the regulatory agency considered 1,728 Australian financial services (AFS) licence applications; comprising 1,226 received during the relevant period. From this, 758 were approved, which is a 44% success rate. Other applications that were considered include credit licence and registrations. 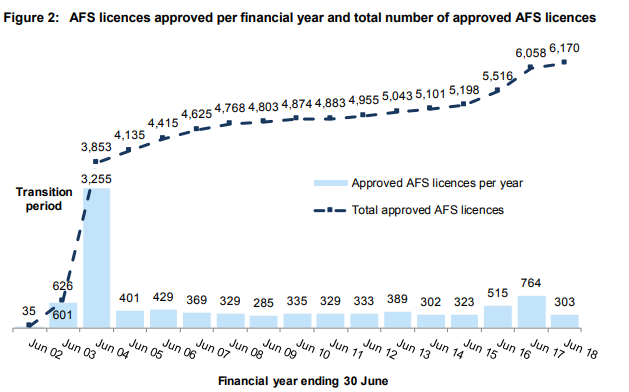 Forex brokers, trading venues as well as financial firms need to acquire an AFS licence before they are allowed to legally operate within Australia.

Application for an AFS licence takes more than 150 days

In the meantime, brokerages need to consider the amount of time it takes to obtain a license when thinking of opening up operations in Australia.  The amount of time depends on the complexity of the business structure, thus, requiring considerable additional work.

While sharing his thought on the process, the Executive Director at ASIC, Warren Day stated:

ASIC says “No” to some applicants

It is also worthy of note, that ASIC declined to accept six responsible managers nominated by the AFS licensee on the ground that they lack the knowledge and skills required to meet the organisational competence obligations.

A total number of 202 AFS licence applications were withdrawn prior to the time ASIC made a formal determination.

The Australian watchdog has also refused seven new AFS licence applications and four AFS licence variation applications during the relevant period. ASIC says the number of applications rejected would have been much higher if applicants had not withdrawn their applications in response to the regulator’s feedback rather than proceeding to a formal determination.