The Argentinian stock market has collapsed drastically as a result of the presidential elections in the country, which caused the peso to register a 30% low against the U.S dollar at press time.

August 13, 2019 | AtoZ Markets – The Argentine central bank then took an urgent shot and used $ 50 million of its own foreign exchange reserves on August 12 to intervene for the first time since September 2018, as per resources.

The data showed that it was only less than two hours where the Argentinian peso fell drastically against the US dollar, the thing that made peso the worst performing currency in emerging markets this year. The current decline has narrowed. 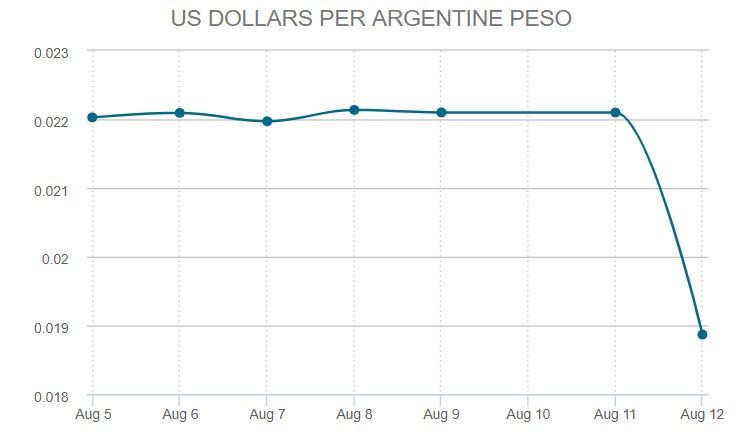 Argentine President Mauricio Macri said that before the October general election, the ruling party needs to redouble its efforts to reverse the situation. This year’s big selection will be held on October 27th. If a candidate has a vote rate of 45% or more or 40% or more and 10% higher than the second place, he will be elected as the next president. The primaries have made the probability of re-election in the mark smaller and smaller.

Investors in Argentina were disspointed

Several resources talked about the impact the elections have made so far on the local currency and its position among its counterpart in the foreign exchange market, citing prominent figures regretting the current result.

Goldman Sachs’ vice president Tiago Severo said in a published research report that both domestic and foreign investors in Argentina were disappointed with the results of the primary elections, and that the continued deterioration of market sentiment and the resulting financial tightening may be in the next few days.

As investors worried about the return of the left-wing populist government represented by former President Cristina Fernández de Kirchner, it will reverse the many policies of Mark Li’s pro-market and pro-business.

The Argentine stock exchange market suffered a “three kills” situation after the market opened on Monday, according to media outlets.

After the incident, the Arbitrary Interbank Offered Rate rose to 90%-120%, and the average interest rate last Friday was 61%.

The Argentine central bank used 0.5 billion of its own foreign exchange reserves on August 12 to intervene for the first time since September 2018.

The Argentine Interior Minister stated that the government will work to reverse the electoral situation. The market reaction reflects political uncertainty and risk.

3 Major Factors You Should Always Check in a Crypto Exchange

Best Australian Based Forex Broker in 2021
Forex Crypto
Top 5 Forex Brokers
Top 5 Crypto Exchanges
Your subscription could not be saved. Please try again.
Thank you for subscribing. You will be the first to receive all the latest news, updates, and exclusive advice from the AtoZ Markets experts.
Everyone is reading
Cryptocurrency Market-Experts Make New Predictions
FCA Publishes New Strategy to Scams and High-Risk Products
Cryptocurrency Adoption in Africa Increases Significantly by 1200%
close ×