Online retail giant, Amazon files Crypto patent in the US for a Proof-of-Work (PoW) system that uses cryptography. Is Amazon looking to launch its own cryptocurrency?

May 17, 2019, | AtoZ Markets - The American retail and e-commerce giant, Amazon is ready to take on the crypto space with its strategic move. The shopping behemoth that is considered as one of the biggest tech firms in the world has come up with a patent for Proof of Work (PoW) System based on Crypto.

Amazon files a patent for Crypto-based Proof of Work system

The patent which has started circulating, reveals that Amazon may be looking into crypto-related systems, like PoW and Merkle Trees. The document, filed under the jurisdiction describes a system that has a “first party” complete computational work to gain access to a computing resource. The document’s abstract also mentions hash trees, which are also referred to as Merkle Trees.

Bitcoin, Ethereum, and other blockchains use a very similar system. Funny enough, however, the patent did not specifically mention “cryptocurrency”, “blockchain”, or “Bitcoin” at all, and instead described the Proof of Work system in immense detail, specifically touching on how it could be used to mitigate DOS (denial of service) attacks from bad actors. Despite the lack of cryptocurrency or digital asset-related discussion, the patent mentioned SHA-256, which is the hashing algorithm that Bitcoin and related crypto assets use.

How Do Merkle Trees Work? Today, Bitcoin and Ethereum use Merkle Trees on their peer-to-peer networks. Amazon’s patent describes a similar system – although it’s important to note the patent doesn’t discuss blockchain or cryptocurrencies whatsoever.

Proof-of-work systems pre-date Bitcoin by about 15 years. In the 1990s, researchers proposed using proof-of-work systems to prevent email spam. Anyone who wanted to send an email would have to perform a little bit of processing work to send that email. It would not be practical for spammers to send thousands of emails because they would need to perform an enormous amount of work.

A proof-of-work system could mitigate denial of service attacks, forcing users’ CPUs to perform work before accessing a website.

Some crypto enthusiasts have taken this news as a sign that Amazon is joining the cryptocurrency revolution. As Morgan Creek’s Anthony POMPLIANO wrote on Twitter, “there’s not a large company in the world who isn’t going to join the revolution.” 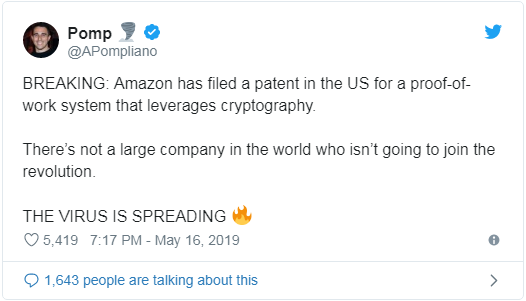 Is Amazon launching its own cryptocurrency?

As we have earlier stated, Amazon’s proof-of-work system patent mentions nothing about cryptocurrency or blockchain technology. However, that hasn’t stopped some eager crypto enthusiasts from theorizing that Amazon is preparing to launch its own cryptocurrency – an Amazon Coin, if you will.

This isn’t the first time Amazon has been linked to blockchain in the past month. On April 30, the e-commerce giant announced that its Amazon Web Services would launch a managed blockchain service to all of its users, allowing AWS users to set up their own blockchain networks within their organizations.

Meanwhile, as AtoZ has earlier reported, Amazon subsidiary Whole Foods just announced that it was accepting Bitcoin payments at all stores immediately, including payments in BTC, ETH, GUSD, and BCH. Amazon hasn’t given any indication that they want to break into the cryptocurrency space. However, this latest patent certainly shows that Amazon is interested in the benefits of proof-of-work systems.

Founded by Jeff Bezos, the firm is ruling the market with its wide spectrum of services. However, its rival retail chain Walmart gave it a tough competition recently. Famously, Amazon had offered next-day shipping, following which, Walmart also declared a similar offer for its customers.

At the time, Walmart noted that it will apply next-day delivery in Phoenix, Las Vegas and Southern California. It plans to expand its business to around 75% of American consumers by the end of 2019.

The Butterflies Museum Collaborates With BitColors For Its Hand-drawn NFT Collection
Broker of the month!