Get VIP Trading Signals Market Watch
Trade Now Your capital is at risk.
Amazon AWS technical problems have resulted in delays in deposits and withdrawals on several cryptocurrency exchanges on Friday.

Binance is one of the largest crypto exchanges. It was one of the markets in which the outage affected. Since the part of its services relied on AWS.

Another popular exchange, KuCoin, was affected. And it also warned about limitations to some of its services:

“Due to the overheating of part of our chassis in the machine room we deployed in AWS, Tokyo, part of our services might become unavailable.”

KuCoin further clarifies that their engineers are working to mitigate the problem. So that it can resume all operations. Today's outage is yet another example of how much the crypto market relies on cloud services. Beyond exchanges, some nodes and storage facilities use AWS or other cloud-based services to offer a faster, global experience. 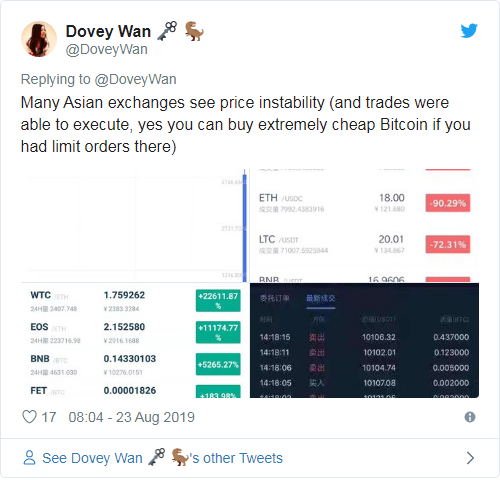 Sometimes rogue trades are rolled back. However, some traders were able to withdraw before setting the limitations. Apart from Binance and KuCoin, Tokyo-based crypto exchanges have not reported any issues thus far. However, BitMex reportedly announced the closing of deposits and withdrawals. To avoid loses based on mistaken orders.

Furthermore, critics saw the usage of AWS as a weak spot. And an example of dangerous centralization, exposing the crypto ecosystem to additional risks:

Today's outage has not led to dramatic price moves. But, Bitcoin price remains mostly unchanged at around $10,18. The outage also unaffected it. Despite the reports, the blackout allowed investors to buy bitcoin for as low as $10 or even $1. The crypto markets are still relatively calm.