Amazon accepts Bitcoin payments due to a partnership between a payments startup Flexa and the Winklevoss-owned exchange Gemini.

May 14, 2019, | AtoZ Markets – The crypto market seems to be in the middle of an explosion right now even though some are skeptical about digital currencies. Every day there appears to be more convincing evidence that digital currencies are heading towards mainstream just how the crypto experts have predicted.

On Monday, May 13, a new initiative was announced by the e-commerce giant Amazon, that they are now accepting cryptocurrencies as a payment method. The currencies accepted include Bitcoin (BTC), Ethereum (ETH), Bitcoin Cash(BCH), and Gemini Dollar (GUSD).

The initiative results from a partnership between a US payments startup Flexa and the Winklevoss-owned regulated cryptocurrency exchange Gemini.

“The retail initiative comes via a partnership between Flexa, a payments startup, and Gemini, the Winklevoss-owned digital currency company. It works by piggy-backing on the digital scanners that many big retailers use to accept phone-based payments from their apps and from digital wallets like Apple Pay,” writes Fortune’s Jeff John Roberts.

The author also posted on Twitter the massive adoption-related news and confirms it after trying out the new feature during the past weekend. He states that even if retailers have been low key on the matter, he tried it and it worked. 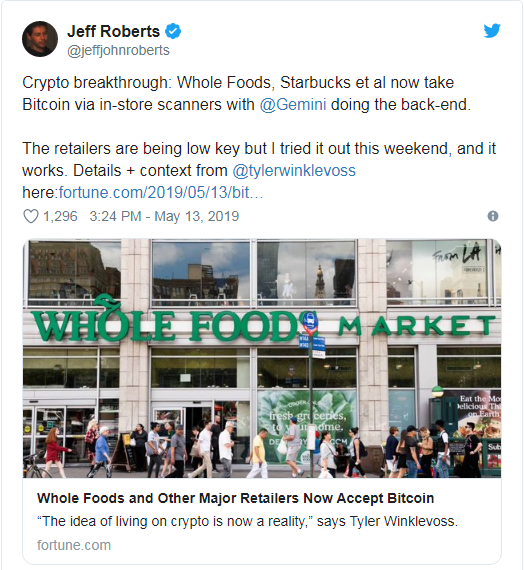 He further mentioned the fact that Gemini’s Winklevoss twins are people with huge credibility in the crypto space and this is important to mention. Things are working just as advertised, and the twins are buying coffee at Starbucks using crypto. 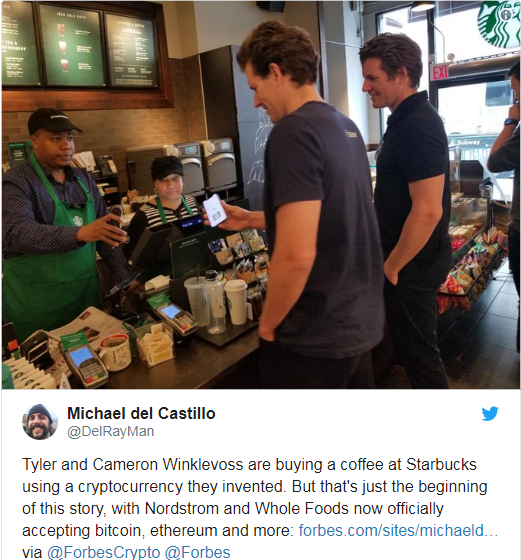 This news is definitely enormous, and it shows that the crypto space is racing towards adoption. It is worthy of note that so far there were no “leaks” about the project, and the launch took place exactly at the right moment, heating the growth impulse. Whether it is a coincidence or not, the Winklevoss twins won’t tell, but they are, however, pushing the entire crypto sector to integrate with the real world.

How to use Flexa’s SPEDN app

Due to the partnership, users will be able to spend their cryptos at numerous retailers via the Flexa’s SPEDN app released at Consensus 2019 on May 13. The app is based on existing payments infrastructure used to accept digital payments such as Apple Pay. It is notable that each SPEDN wallet is securely custodied. To identify payments from the app, all the retailers must tweak their scanners. Moreover, SPEDN is easy to use. It has an intuitive interface that enables customers to make crypto payments quickly and easily by simply holding up the app on their smartphone at the point of sale.

Merchants have the option to receive their payment in cryptocurrency or dollars. According to Flexa, with SPEDN, they will be able to lower processing fees, reduce fraud, and preserve user privacy with their new cryptocurrency-enabled network.

“With Flexa, merchants get significantly less expensive and fraud-resistant transactions, can use the same payment hardware they currently use, and receive payment in fiat currency, not crypto. We believe that not only will this result in cost-savings to the merchant, but to the consumer in the long-term as well.”

As AtoZMarkets earlier reported, Bakkt updates crypto enthusiasts on both Twitter and Medium on the launch of Bitcoin futures contracts developed in collaboration with ICE Futures U.S. and ICE Clear US.

According to the announcement delivered on Monday by the company’s chief executive Kelly Loeffler, Bitcoin futures exchange Bakkt will begin testing BTC futures in July this summer.

At the time of writing, Bitcoin price is trading in the green on CoinMarketCap, and the flagship cryptocurrency is priced at $8,177.60 USD. Massive bulls are expected to hit the market, so stay with your eyes on the prices.

Warren Buffett Stock Portfolio 2021 – Where is he investing?
Forex Crypto
Top 5 Forex Brokers
Top 5 Crypto Exchanges
Your subscription could not be saved. Please try again.
Thank you for subscribing. You will be the first to receive all the latest news, updates, and exclusive advice from the AtoZ Markets experts.
Everyone is reading
Ripple Co-founder Jed McCaleb Stops XRP Sales
XRP Surges Amid Controversial Coinbase Return Evidence
Ripple Agrees to Provide SEC with Company Records
close ×