June 10, 2019, | AtoZ Markets - The UK Financial Conduct Authority has recently issued a warning against AGM invest, which allegedly impersonates the authorized firm under the same name. The financial regulator expressed its concerns about the growing number of the crypto scams. Is AGM Invest scam?

In its warning, the UK financial authority, states that AGM Invest is a clone firm of AGM Financial Services Ltd, which offers insurance services to UK residents. The FCA warns investors, that AGM Invest clone scam uses the name AGM Group and claims to provide trading in digital currencies.

The regulator noted that the AGM Financial Services Ltd, which is an FCA representative firm, has no association with the clone company. The official website of the AGM Invest clone scam suggests that the company is a Belize-based retail forex broker which aims to provide affordable trading solutions to retail traders. The company also crypto trading. 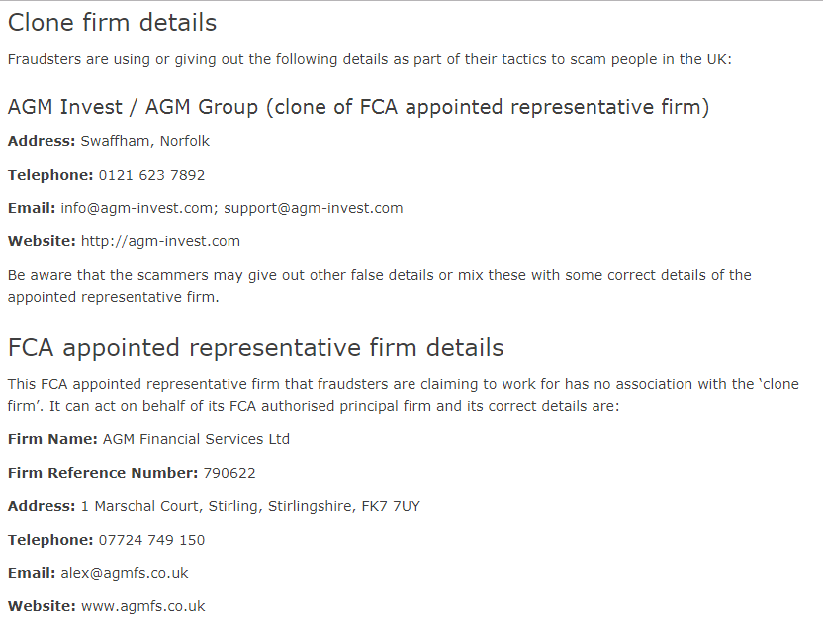 The scammers working in the crypto market have a tendency to be creative in their fraud schemes. For example, in April a man in Singapore fell for a bitcoin machine scam advertisement, transferring $734 USD worth of bitcoin to fraudsters impersonating official personalities. The 49-years-old scam victim told the local authorities that he called the phone number the scammers’ poster referred to as a “bitcoin alert from the authorities”.

The fraudsters who answered the man claimed to be officials from the Chinese authorities. They then told their victim he was under investigation for transnational crime, requesting him to transfer a total of $1,000 ($734 USD) worth of bitcoin to their wallets on, the thing the victim did.

Last week, Indian police uncovered cryptocurrency scam. Divyesh Darji who was a Bitconnect promoter has been accused of drawing off millions of Indian Rupees and manipulated people to get huge returns on their investment in Regal coin.

Sometimes, crypto scammers, use details of legitimate firms to lure unaware investors into their schemes and collect their funds.

According to the latest of the British and French authorities’, scams related to cryptocurrencies has become widespread. According to the FCA  in the 2018/19 fiscal year, investors lost about £27 million ($34.4 million) to forex and digital currency scams. An Autorité des marchés financiers (AMF) in its annual report also noted that the number of cryptocurrency related scams skyrocketed in 2018.