Get VIP Trading Signals Market Watch
Trade Now Your capital is at risk.
Euro continues last week's slump as the dollar hits a fresh high. Is there any likelihood for sharp reversals this week? The following 8 March EURUSD Elliott wave analysis shares some insights.

08 March 2021 / AtoZ Markets - Last week was very eventful in the forex market as investors continue to support bids for safe-haven assets. The latest reason is the government's ignoring of inflation and the readiness to continue to hold on to the current fiscal and monetary policies despite recent recoveries. However, traders continue to anticipate policy tightening earlier than anticipated at the turn of the year. The dollar surged on the risk-off mood. DXY touched 92.2 last week before dropping below despite very upbeat US job reports. The NFP on Friday doubled the expected figure while the unemployment data dropped to 6.2%

At the start of the week, the dollar has started to push higher reflecting impressive job data. The dollar index touched 92.3 in the early hours of the London session on Monday. In the contrast, EURUSD plummeted below 1.19 to hit its lowest since late November. Euro-dollar is now down by over 3.5% in 2021 - its biggest dip since March. A lot still depends on the dollar with the current inflation-driven sentiment. Later in the week, traders will have their eyes on the US inflation data and the ECB monetary policy meeting. It now remains to be seen whether the currency pair will have a strong support above 1.18 or would decline to the 1.17xx region.

From the 8 March EURUSD Elliott wave analysis below, we could say that the bullish trend is still intact. At least for now. We will have to see how strong the current dip would be. Short-term sellers should beware of a bearish trap especially at the current level. 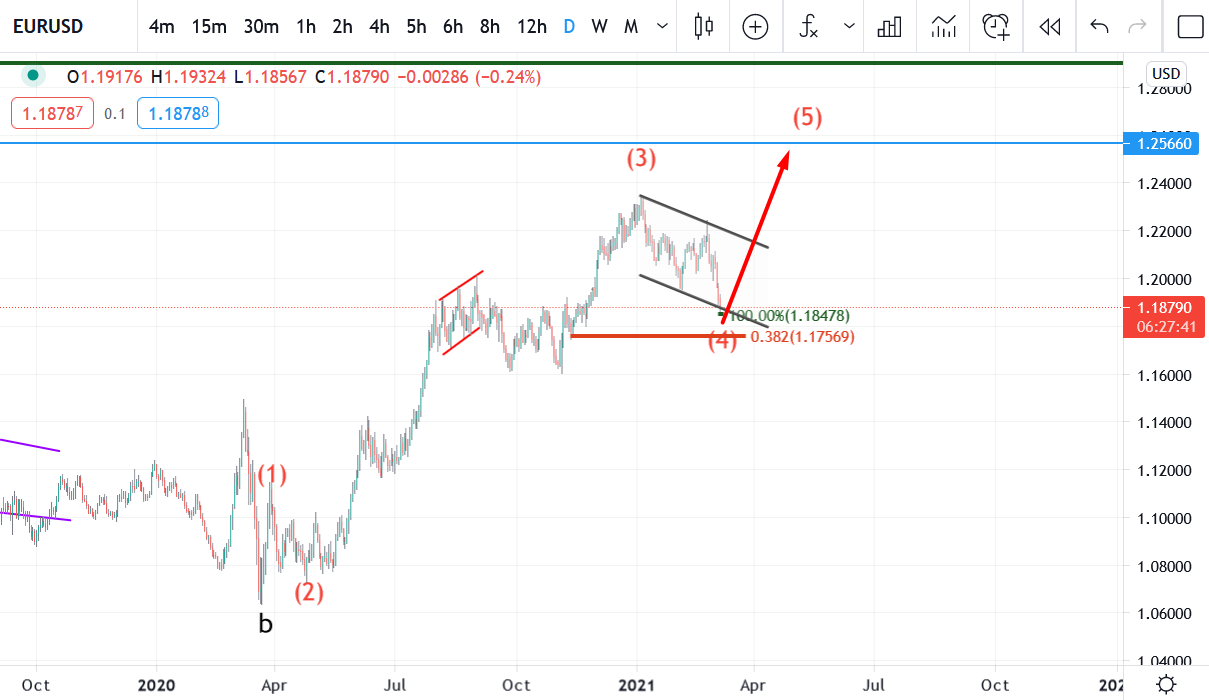 The Elliott wave analysis above suggests the current dip could be the 4th wave of the bullish impulse wave trend. Oftentimes, the 4th wave declines to the 38.2% Fibonacci retracement of the 3rd wave. Therefore, we might see wave (4) continue to 1.175. However, with the extensive nature of wave (3), we could also argue that the current correction might end at prices around 1.144 (100% Fibonacci projection of wave (4)'s internal sub-waves). The price is currently around the latter where we also have the base of the zigzag channel. If there is a bullish accumulation at this level, we should first see a jump to 1.2. Otherwise, a decline below the base of the channel down to 1.175 will happen. In conclusion, fresh buyers should watch for bullish reactions at the 1.1845-1.175 support zone.