Ripple has been hit today. In the last 24 hours, it has gone through a big drop in its market capitalization. Will price drop further or resume the rally? 8 January Ripple price prediction looks at what could happen next from technical analysis perspective.

08 January, AtoZForex  –  Since the beginning of the year, Ripple has seen a massive growth in its market capitalization. It displaced Ethereum and almost halved Bitcoin in market capitalization. This period also saw its price grow massively. At a point, it was about hitting $4 and even break above. Meanwhile, since last week, price was seen dropping below $3 and in the last 24 hours, Ripple prices have lost 25% in value. Now at $2.5 and losing about $35 billion of its capitalization, it’s plunged back below $100 billion.

We have read in recent time how and why the Crypto world needs more than Bitcoin so as to meet various needs. The world of Cryptocurrency has gone beyond the idea relying on one Coin. Just as Ripple CEO,  Brad Garlinghouse said in October.

“In 2017, people have realized there isn’t going to be one Crypto to rule them all. You’re seeing vertical solutions where is focused on payment problems, Ethereum is focused on smart contacts, and increasingly Bitcoin is a store of value. Those aren’t competitive. In fact, I want Bitcoin and Ethereum to be successful.”

Ripple and Ethereum both performed better than Bitcoin last year and this year so far. What should we expect next after the 25% dip we saw today in Ripple?

8 January Ripple price prediction: what next? 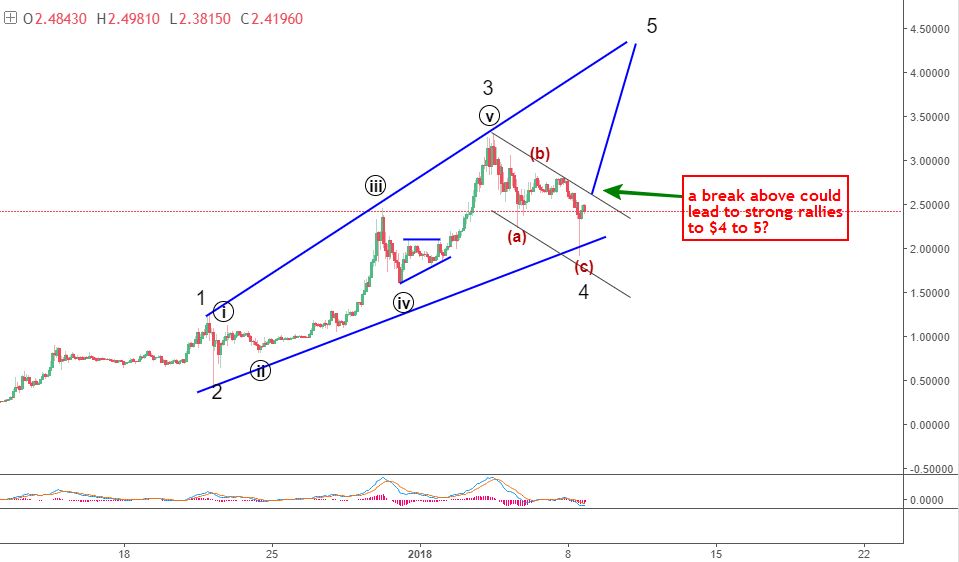 The chart above shows a bullish impulse wave pattern. The dip we saw since last Thursday is corrective. It seems there is more to do upside especially if price breaks as shown in the chart. This could be the last leg of rally before a major crash would happen. A dip below $1.5 in the coming days against our forecast is not very much likely but a possibility. Personally if I am to put a wager on this, it would be in favor of further bullish moves in the coming days.

Please note that this is for educational purpose and not a call for action. Stay tuned for the next update.