Bitcoin dropped below $10000 and was trading in the lower $9000s yesterday. Is the Crypto market about to get bearish again? The following 8-10 March Bitcoin price prediction looks at the technical forecast of BTCUSD using Elliott wave theory.

The dip was hugely expected, if not any other place but here, with our regular BTCUSD Elliott wave forecast. The February dip to $9200 was shallow of a correction. Often times, the first correction of an impulsive move gets to 50%-62% retracement or even deeper. Only about 24% of the time do we see corrections that are shallower that 50% retracement. 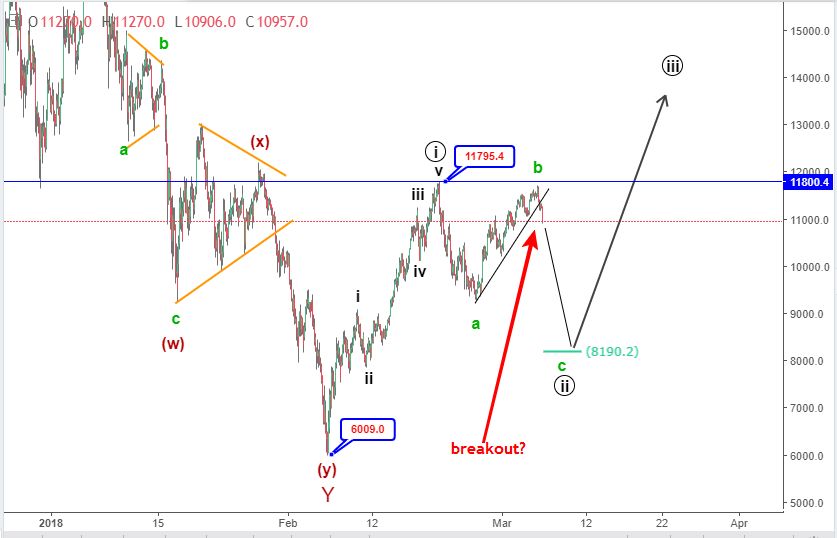 This scenario is the same we had in the last update. price breaking downside toward $8000 to complete the correction of the 6000-11750 impulse wave rally. This scenario is very likely.

8-10 March Bitcoin price prediction : what next? The 3-wave bearish correction continued as expected. The next bearish target to watch out for is $8000-$9000. If price gets to this level, we’ll see how it will react. The continued bearish move is not expected to dip below $6000. If it does, we will start counting a new bearish impulse wave from $11800 which could see price drop below $3000. That’s less likely. What’s more likely is that price will drop to the $8000-$9000 or slightly below and rally above $11800 high. Stay tuned for the next update.