Get VIP Trading Signals Market Watch
Trade Now Your capital is at risk.
Gold collapsed on Wednesday as the US Yield boost the dollar. The following 6 January Gold Elliott wave analysis shares some technical insights.

January 06, 2021 / AtoZ Markets - The yellow metal maintains its status as one of the most volatile instruments since 2020. The commodity collapsed by 2.7% (over 500 Pips) in less than eight hours on Wednesday. At the same time, the dollar fought back but shed some of the gains later in the New York session. While the long-term forecast assumes further rallies for the metal, traders can watch for more decline in the coming days. Meanwhile, the non-farm payroll data could add more volatility at the end of the week.

Since August 2020, Gold seems to deviate from the risk-off flow and rather moves with the market risk. Despite vaccine hopes and the dollar decline proving investors are more inclined to take more risks, the metal often known for its safe-haven nature took the direction of riskier instruments. Since September, Gold seems to maintain a certain degree of inverse correlation with the dollar and we have seen that exhibited so far again this year. However, traders should watch out for this correlation status as it could change at any time. On Wednesday, the Gold collapse coincides with a sharp recovery in stocks (risk-on instrument).

In the previous updates, we reckoned that Gold has probably completed the bearish phase that started early August, at 1764 in December. The ensued surge was expected to hit 1960 at least which has already happened. The chart below shows the long-term view again. 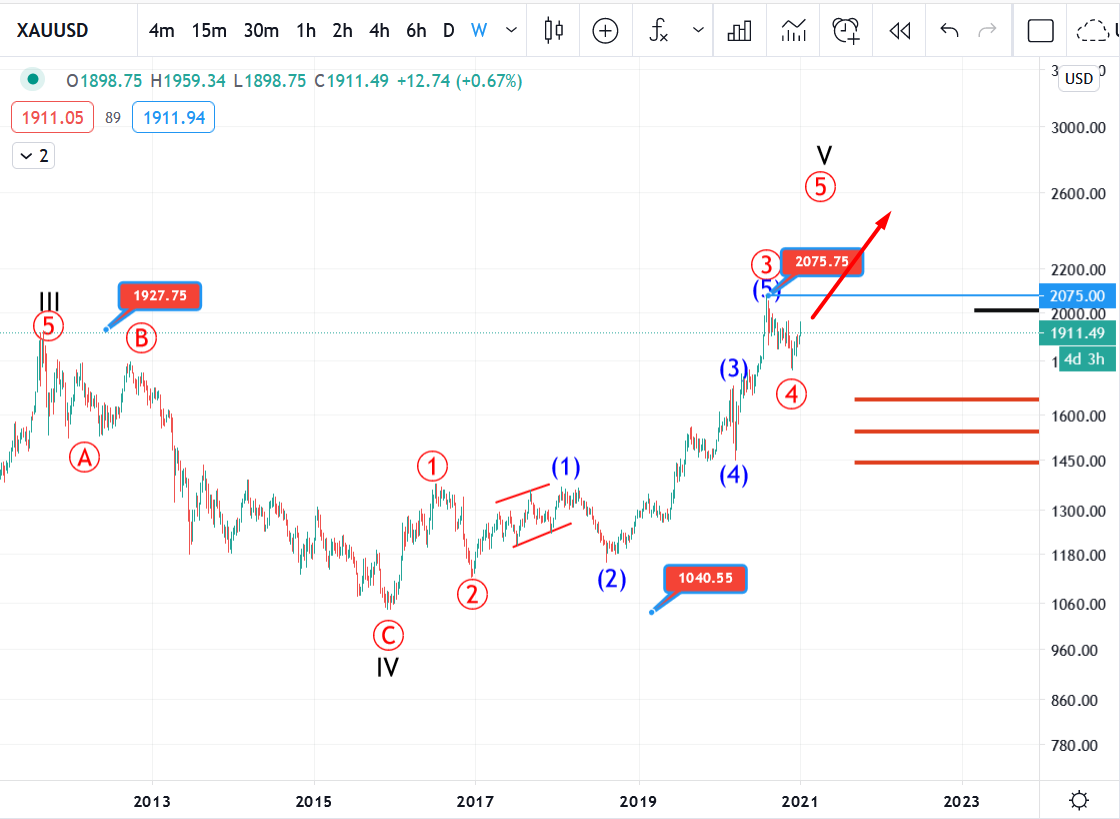 As the chart above shows, Gold is completing the 5th cycle wave from 1040.44 from November 2015. The primary sub-wave (circled in red) of the cycle wave V is still in motion and has most probably completed its 4th leg at 1768. In the long-term, further rally should happen toward 2500 unless primary wave 4 would take more dip to 1654 (38.2% Fibonacci retracement of primary wave 3).

In the last update, we used the chart below after the surge from the 1764 low. We expected a significant dip before the bullish run continues. 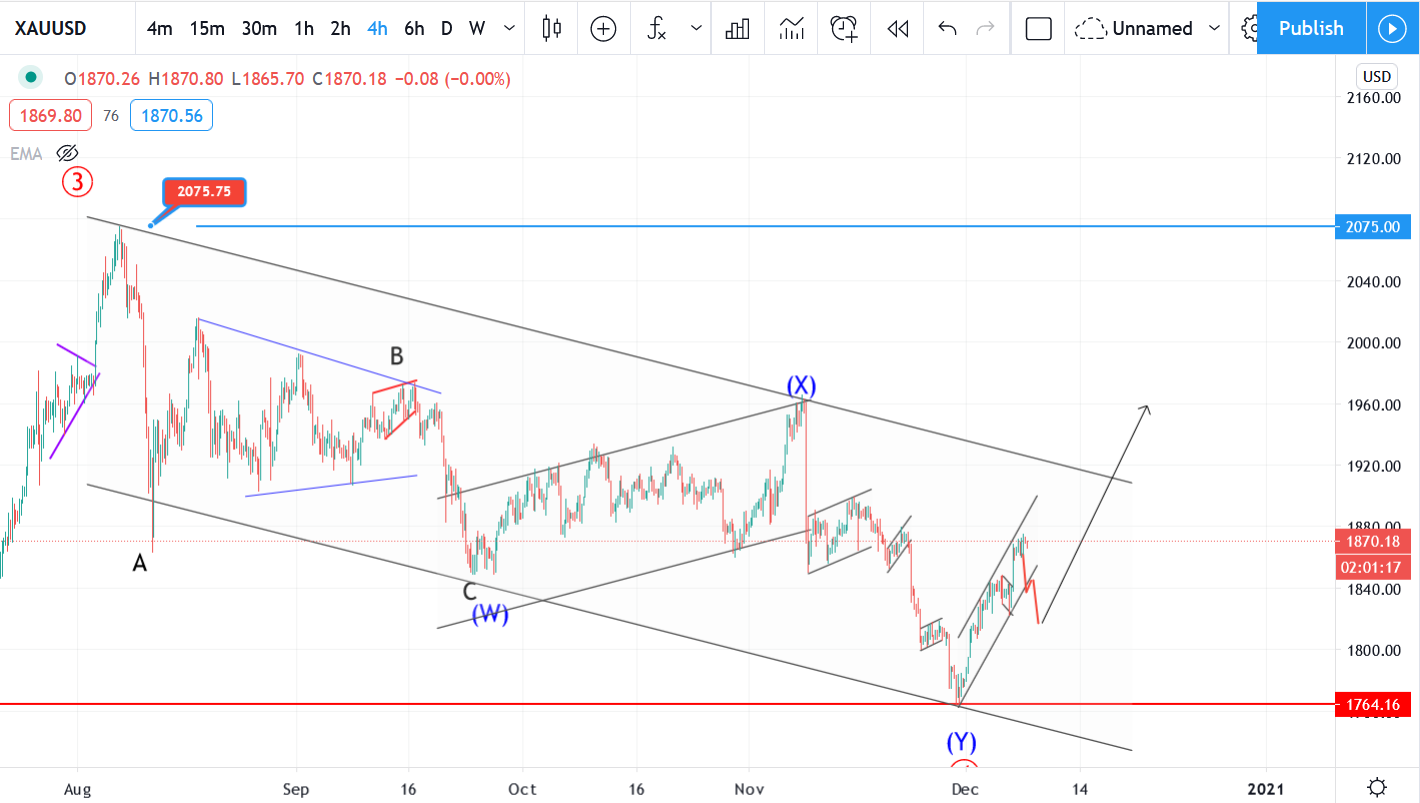 The new chart below shows the metal ran toward the 1963 high - top of wave (X) just as we expected in the last update. 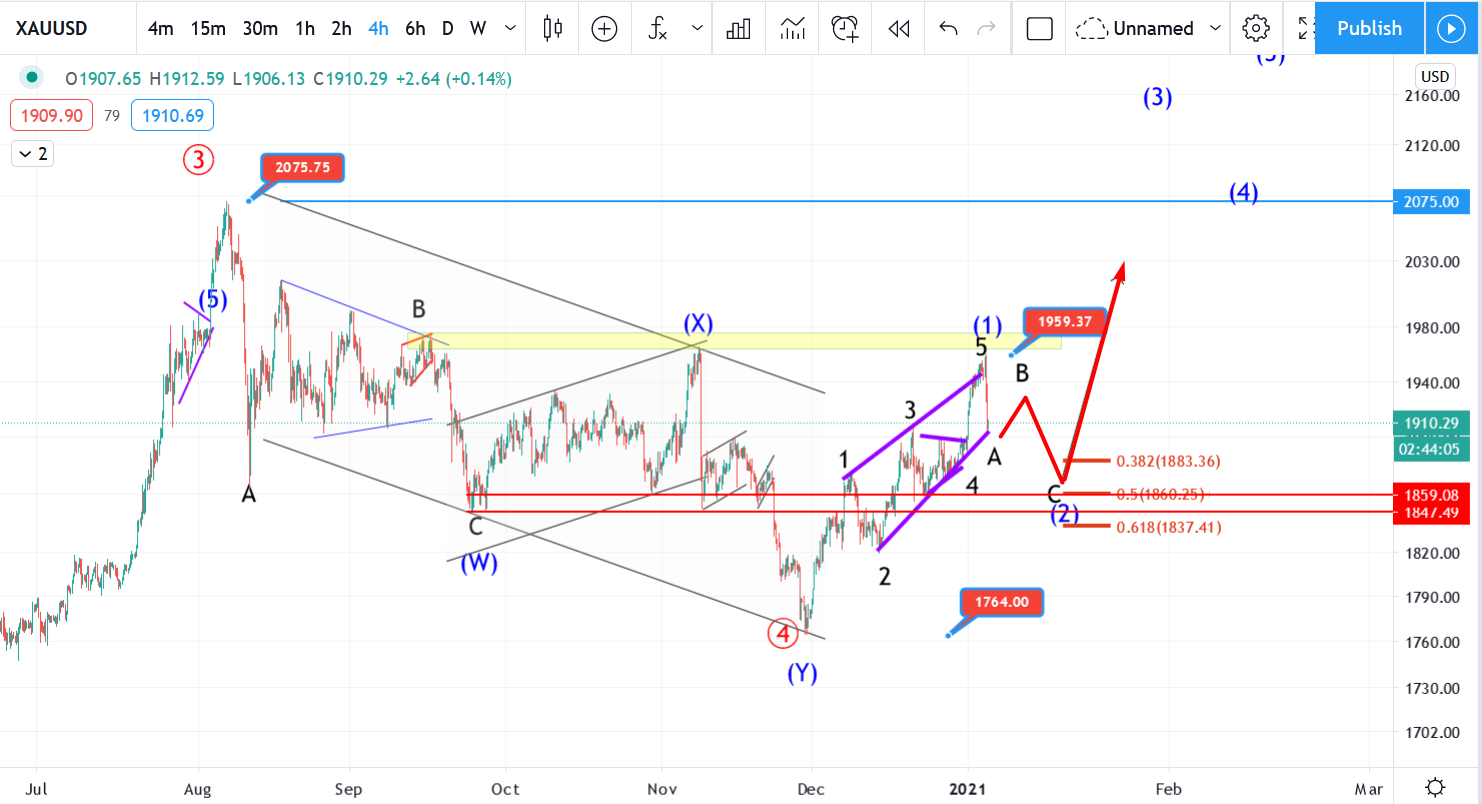 As the chart above shows, the resurgence from 1764 completed a leading diagonal pattern around 1960, just below a resistance zone. This could be wave (1) of the 5th primary wave to complete the long-term impulse wave pattern from 1040.44. The current dip should develop into a 3-wave corrective structure below 1900 with possible targets at 1860-1837 before the long term bullish trend resumes. The next bearish opportunity would ensue at the end of wave B and the next bullish opportunity once wave C of (2) is confirmed to have ended. We will follow up on this development, make sure you don’t miss the next big move.