Ethereum picked at $520 after breaking $420 previous high. Will price drop back below $400 or rally above $520? The following analysis is based on 6 December Ethereum Elliott wave analysis.

06 December, AtoZForex – After the Ether broke outside of multi-months triangle pattern, an impulse wave was clearly in formation as price broke above $420 high. When we noticed it, we alerted you a potential $520 peak before price started dropping in a corrective manner. It seems Crypto-markets would be very suitable for Elliott wave theory as the ‘market maker’ manipulations won’t be involved. Elliott wave theory can be used to gauge the psychology in this market for better decision making. What should be expected next?

In the last update, my focus was on the impulse wave breakout from $275 which we had earlier speculated. I noticed that the 3rd wave of this impulse wave was extended. In a 3rd wave extension, there is often an equality ratio between wave 1 and 5. At $520, wave 1=5.  The chart below shows what we had in the last update. Since the breakout, $420 has been taken out. With price heading to go above $500, a new high will be formed. The chart above shows the wave count after the breakout. An impulse wave signifies the end of the sideway move. Once this pattern is complete, a 3-wave dip should follow to $375 -$400 before the bullish trend continues. I expect price to make a new all-time high this week then followed by a corrective dip. 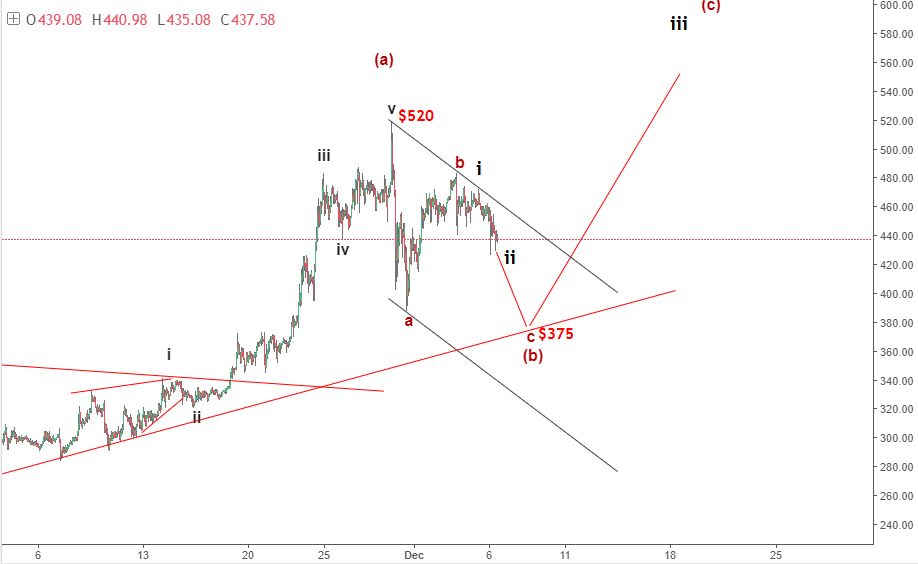 Wave a of (b) was sharp. Price is expected to resume upside and break above $520. There is high likelihood that the bearish correction will continue to $375-$400 before this happens. A sudden break above wave b of (b) at $480 might definitely mean that wave (b) had already ended at wave-a low and the recent dip is just wave ii of (c). Stay tuned for the next update.