USDCAD continued bearish this week and it seems that’s how it will stand till the end of the week. The following looks at 5-7 April USDCAD Elliott wave analysis and what could happen next week.

05 April, AtoZForex  – USDCAD dropped further after a bullish correction that was seen in most of last week. The bullish correction was the wave b of a larger degree bearish correction. If this move continues, we will see USDCAD at 1.26 tomorrow (if there is enough momentum) or next week. The drop to 1.26 or any level price bottoms, would complete an important 3-wave correction which is known to often follow an impulse wave. We looked at the impulse wave and the start of this 3-wave dip in the previous updates.

In the last update, we looked at the continuation of the bearish move and how to take advantage after price confirmed the bearishness. It’s important to wait for price to confirm the completion of an Elliott wave pattern and then join at a reasonable price in the direction of forecast. The chart below was used in the last update. 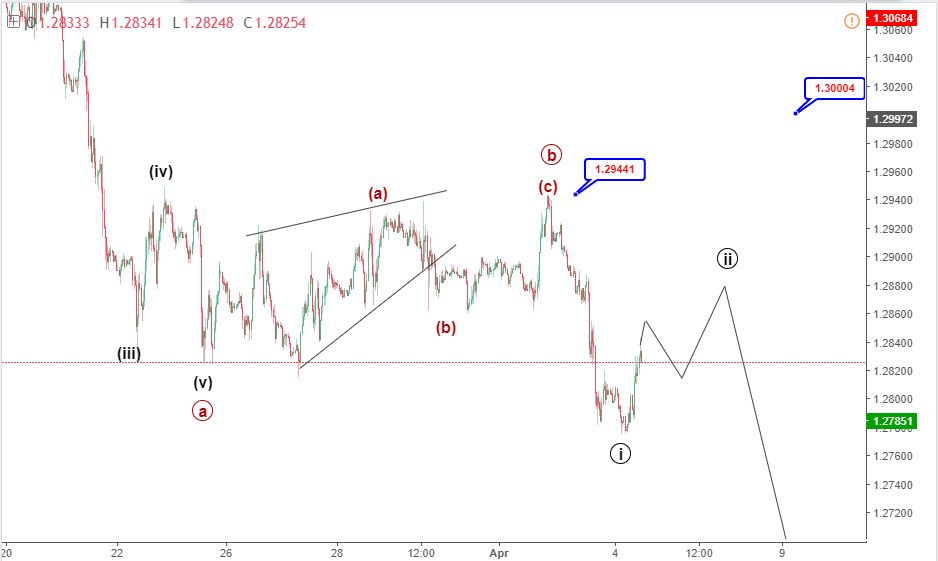 Wave b (circled) ended at 1.295. Wave c (circled) followed and this would probably be an impulse wave. If I would trade, I would sell the dip with my SL at 1.295. If this wave count is correct, price could drop to 1.25 and thereby leave us with a 400-500 Pips potential trade opportunity.

The pullback that followed was shallower than expected (less than 50% Fib-retracement of the dip) but price continued downside as expected. We can continue watching the bearish wave c (circled) which will most probably be an impulse wave. The chart below shows the wave update. The chart above shows the development of wave C into an impulse wave. Price will have to confirm this in the coming days. Only a break above 1.2846 could jeopardize this expected move. We should also note the possibility of an ending diagonal wave C as an alternative to this impulse wave expectation. Stay tuned for the next update.