It sounds like the Russian government is looking into solutions it was never expected to resort to, in pursues of combatting the U.S sanctions imposed on them.

January 10, 2019 | AtoZ Markets– In a surprising move, the anti-crypto government has reportedly started to explore the cryptocurrency side, to make some kind of balance in its economy in the shade of the overwhelming sanctions referred to above.

To prove it can survive the diplomatic war, the Russian government is thinking today of investing in Bitcoin, allocating billions of U.S dollars in budget for such a purpose.

The well-informed economist as known among the economic medium, Vladislav Ginko, a lecturer at Moscow’s Russian Presidential Academy of National Economy and Public Administration, has just announced that he believes his government intends to allocate almost $470 billion reserves into Bitcoins, with an initial start of at least $10 billion in the first quarter of this year.

The news came in a response to cryptocurrency enthusiast Chris Burniske, who identifies himself o Twitter as “Partner @placeholdervc, a venture firm working to decentralize data, wealth, and power; Co-author of Cryptoassets”, when the latter tweeted on against the background of the “problem of the low adoption of cryptocurrencies compared to other financial markets”, as the topic was described.

The debate seemingly furthered to more names and points in that discussion, as the American twitterati John McAfee criticized in a tweet, the US tax system.

McAfee apparently was daring his government, saying: “I have thrown down the gauntlet to the IRS. Will they take the bait? I gaurantee a "yes". Unlike the SEC, which looked away when I challenged them, the IRS knows only anger and brutality. They won"t allow a "nothing" like me publicly disrespect them.”, where Ginko sounded not wanting to spare such a chance to get McAfee to the Russian side, replying to him with: “John, you're always welcome to Moscow 🙂 Especially since we in Russia is going to stand against US sanctions starting investing at least $10 billion of reserves into Bitcoin”.

The conviction in the decision seems to have taken many talks

The same high-profile Russian economist, who explicitly whispered he is making efforts to serve his government in the U.S-Russian cold war, seems to have recently given an interview to the Australian media outlet, Micky, which the latter published on the 8th of this month, in which Ginko highlighted that Putin’s administration might start with the Bitcoin strategy as soon as the next month.

“I believe that the Russia (Government) will start diversifying its reserves with Bitcoin in February this year when US Congress will introduce a new sanction against Russia.”, said the Russian economist.

The Saint Petersburg State University-graduate had declared earlier the last year that he made efforts to persuade senior officials in the Russian government, that Bitcoin holds the key for the feared financial crisis awaiting his country in the shade of the U.S financial dominance which gives the Americans the power to impose financial sanctions.

“I as an expert economist at Russian Presidential Academy of National Economic and Public Administration put my public media figure’s weight behind the work to persuade various stakeholders of Russian society in the need for investing central bank’s reserves into Bitcoin.”, said the university lecturer.

The latter went further, highlighting that his government is not “against cryptocurrency”, as per his description, unveiling that the Russian President already had already reflected on putting “FinTech as a key factor for Russian economy’s survival”, unveiling as well that many Russian families of who he knows, including officials in the government, “personally made investments in BTC”. 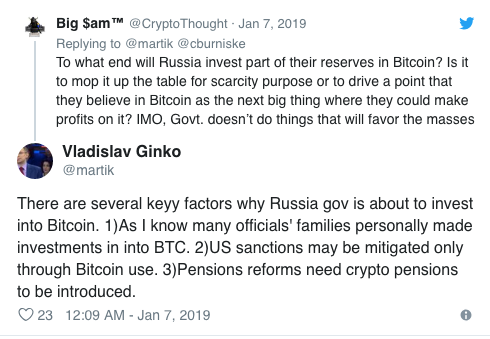 Having come to this point, it is worth mentioning that Vladimir Putin publically declared at the ‘Russia Calling’ investment forum in Moscow in November 2018, that he was seeking alternative reserve currencies as a backup solution.

His prominent comments against the U.S sanctions in the forum came daring and showing a solidified stand, and a determination on overcoming the battle.

“We have no goal of moving away from the Dollar, it’s the dollar that’s moving away from us,” said Mr. Putin. Those making such decisions are not shooting themselves in the foot, but somewhere more delicate, further up the body. Because there’s instability when it comes to doing business with the dollar, gives rise to a desire – and it’s happening all around the world – to find alternative reserves currencies and create a financial system independent from the dollar.”

Fears walk side-by-side with the Russian optimism about crytos

In his other statements in that context though, the Russian president did not hide the concerns he had over cryptos, giving in the same time a sign that his administration can be as patient as needed till being able to make use of this new technology as part of the solution for the financial crisis that may burden the country.

“Bitcoins are backed by nothing… This money (is backed by nothing), that’s the point, this is the major problem. They are not really linked to anything and backed by nothing. However, as an accounting unit these coins or whatever they are called, they can be used, and their adoption becomes wider and wider, as some kind of unit in some account probably, it’s possible,” said Putin.

It is worth reminding that the U.S administration has yet imposed more than 60 packs of sanctions on the Kremlin, many of which were said to have inevitable impact.

The sanctions imposed came in political pressure on Russia, for the files stuck between it and the U.S.A.

Market analysts and crypto enthusiasts are now following the move Russia is likely to make, which may well boost the value of cryptos if it happened, and may as well open a new horizon for them, with regard to deliberation and use, the thing that AtoZ Markets will keep and eye on, and updates its readers as development happens.