Ripple rallied fast last month to be the second largest coin in the Crypto market after Bitcoin. It also rounded off the year as the best performing coin with more than 13000% increase. In the 4 January Ripple price prediction below, I will discuss when next to buy this Coin.

4 January, AtoZForex – The Ripple volume surge was so dramatic in December last year. While Bitcoin drop some of its market volume share, Ripple added more making it now the second most traded coin in the market. It was no wonder that price rallied quickly after the biggest 2017 dip we saw across major Coin. Ripple didn’t just rally quickly but is about tripling its price in less than 2 weeks making new highs. Today, price traded close to $4 and I think it’s safe to say a bridge above could happen soon. According to CoinMarketCap, price is now around $3.45.

In the last update, I expected price to dip as I made an ending diagonal forecast. Price didn’t complete the diagonal pattern but rallied even far further. What should we expect next? The chart below gives a clear technical view.

4 January Ripple price prediction: what next for XRP? 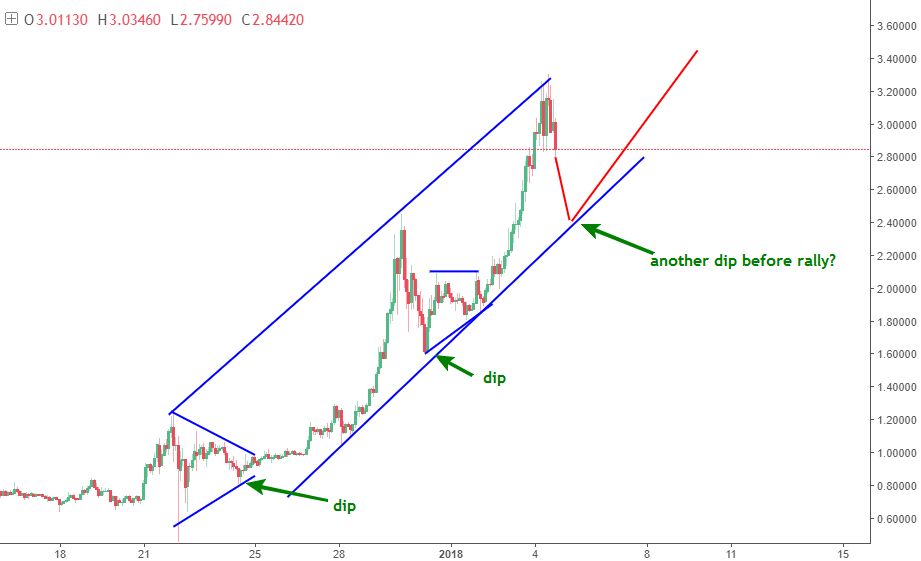 Price broke upward from 0.2-0.3  in just about two weeks ago and has not looked back since then. A well held upward channel shows the bullish strength. Price could contain within this channel. It seems after the current dip, price will advance further. The next rally could see a bridge above $4. Stay tuned for the next update.

Many believe Ripple has some advantages over Bitcoin. For instance, Ripple’s technology makes it a secure currency, according to the supporters. Also, the team behind the project claims that the coin provides faster transactions than Bitcoin – just a matter of seconds.