Get VIP Trading Signals Market Watch
Trade Now Your capital is at risk.
Bitcoin SV is having a massive surge. The cryptocurrency has gained over 45% in the last 24 hours. Let's look at the 3 reasons why Bitcoin SV price is surging.

January 14, 2020 | AtoZ Markets - The cryptocurrency market is doing well so far in 2020. After ending the second half of 2019 bearish, it's good that the market has gained over $35 billion market cap since the turn of 2020. At the top of the gainers' table is Bitcoin SV (BSV) sitting comfortably. The cryptocurrency gained 45% in the last 24 hours (at the time of writing this report). In other words, it has gained over 170% in the last one month. This quick surge has, therefore, elevated the digital asset to the top among the top 20 capped cryptos in the last one year, 6 months and 3 months at 300%, 85% and 80% gains respectively. In fact, it has gained 145% in January 2019 alone. In terms of price appreciation, no crypto is close among the top 20.

With the massive surges, Bitcoin SV is now the top 6 most capped cryptocurrency listed on Coinmarketcap. In terms of market capitalization, Bitcoin SV and Tether are set to displace Bitcoin Cash and Ripple to occupy the 3rd and 4th position on the table in 2020. Meanwhile, what are the causes of the current BSV spikes?  The following looks at the 3 reasons why Bitcoin SV is surging.

Reason 1: Bitcoin SV creator, Craig Wright has reportedly collected documents that could prove him being involved with Bitcoin creation. The embattled self-claimed Bitcoin creator has been at the centre of controversies in the last half of a decade. He claimed to write the Bitcoin whitepaper and has oftentimes lost cases in this regard. However, recent reports revealed he might have real evidence after all. This could have been one of the main reasons while Bitcoin SV gained over 45% ($84) in the last 24 hours.

Reason 2: BitcoinSV has been delisted from major crypto exchanges. This will most probably reduce the number of foul plays on it since it is not available for the majority of the crypto players. As a result of this, the supply-demand factors will come to play more efficiently unlike in most cryptos.

Reason 3: Its hash rate has been steadily increasing. Hash rate has a somewhat direct relationship with crypto price. If this continues, we will most likely see prices go higher to the $300 region and higher. (Charting tool from TradingView). 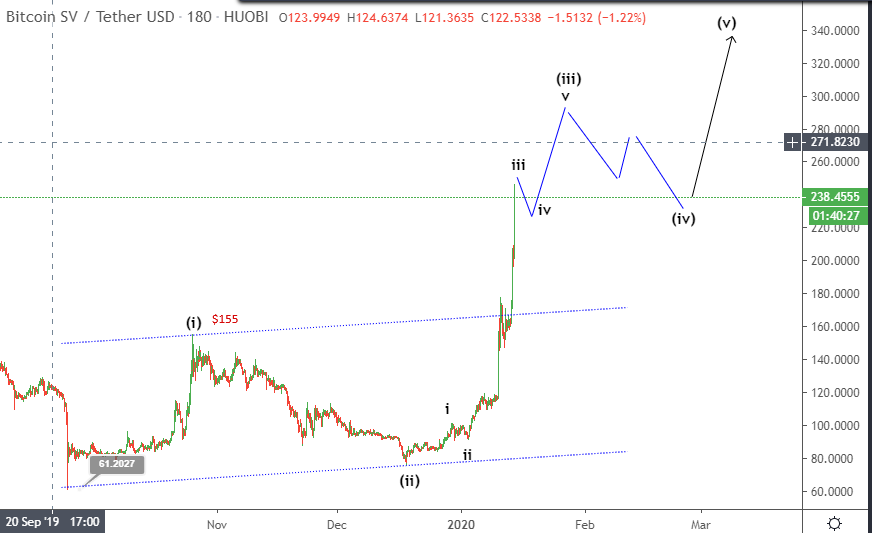 BSV is making a bullish impulse wave from the $61 low. The quick surge above $200 has confirmed the impulse wave nature of the surge. Wave (iii) could extend to $300 before the next dip - wave (iv). Eventually, the price could surge to $350 or higher before the next large dip. Unless a fast dip below $150 happens, the current rally should advance further.