October employment data from the U.S is expected to improve significantly. The USD is in a bullish mood and this is expected to continue. How could EURUSD move after the release?. The following analysis focus on EURUSD based on 3 November EURUSD Elliott wave analysis ahead NFP.

03 November, AtoZForex – EURUSD is the most traded currency pair. It’s often hugely determined by the performance of the dollar. Since September, its been faltering after an improving dollar. The NFP is one of the biggest economic indicators that drag USD pairs. The data is expected to come out at 312k. Often times, the actual release deviates from the expected value. The bigger the deviation, the bigger the move that follows. A worse than expected data will send EURUSD up and a better one will send it down. How does Elliott wave theory prepare us for such a big event?

In the last update, we believed that the fall from September is corrective and might not have completed yet. We set up a price for bullish reversal. On the other hand, we consider that correction is already complete. We identified levels of validity and invalidity of these two scenarios and the opportunities therein. The chart below was used. 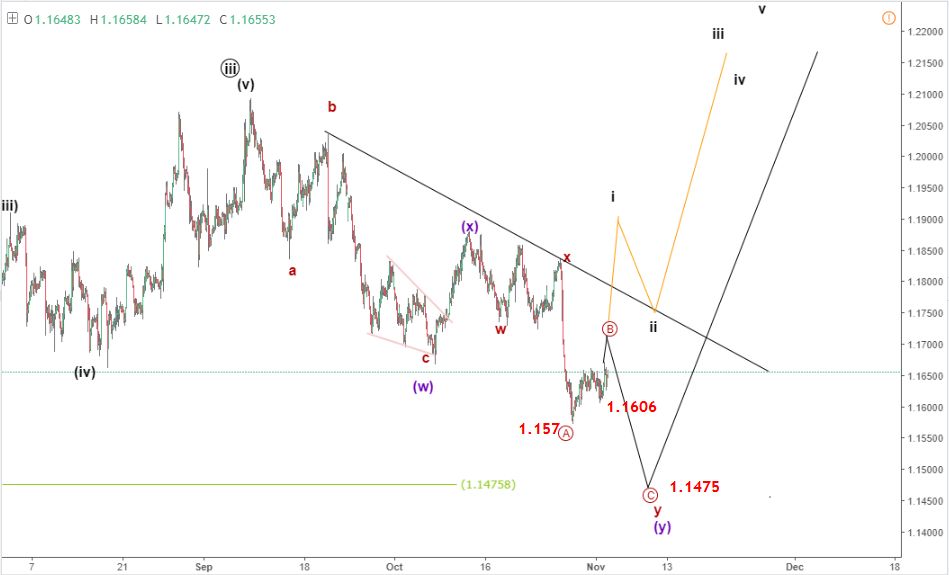 The chart above shows two scenarios both having a bullish end. The first scenario will be favored if price goes deeper to complete the corrective pattern. A dip to 1.1475 and its neighborhood is likely. A bullish signal can be looked for here. If the dip digs below 1.1475 and 1.4, it could be safe to say the bearish trend has taken over. This scenario will play out if price breaks below 1.1606 and 1.157. The second scenario (in yellow) shows the correction to have already completed at 1.157. Price will not go below 1.157 if this scenario will play out. A break above the falling channel will be required to show that the bullish trend has already resumed. Buying the pullback won’t be a bad idea. The chart above is the summary and the significant levels to watch out for. Let’s go back to the data. NFP is expected to come out at 312K. A better than expected release is bearish for EURUSD and worse than expected is bullish. Here is our bias.

No matter how price moves after the release, we will update you. Stay tuned.