Although the US fundamental data have not been consistently strong, BofA believes it is strong enough to reinforce the Fed confidence for a slow tightening cycle to initiate. At most, if the next data edition is mixed, the Fed may wait until December. “We expect the Fed to hike rates this year (our call is for September), and then in every other meeting (two rate hikes this year and four rate hikes next year),” Merrill Lynch notes.

Yet, despite Fed Chair Yellen and central bank member Lockhart stressing a rate lift-off as soon as September, investors seem to question the Fed readiness to act. Their doubt is based on the dampening impact of a stronger USD on inflation expectations and on continuing worries regarding worldwide growth.

However, further improving labour market ought to fortify price developments, additionally, the medium-term inflation outlook has remained supported of late, CA remains to view the Fed game in September.

“As a result, and in line with our September forecasts, we expect EUR/USD to face further downside risk going into the September Fed meeting. In the aftermath, we believe the pair should stabilise given the probability of the Fed preparing the market with a very gradual approach to tightening policy further,” Credit Agricole advices.

Although the ECB has repeatedly reaffirmed that the central bank stands ready to counter any risen obstacles and the Quantitative Easing will run its full course, Merrill Lynch believes the ECB will lower its tone in a month to come.

“We also expect the ECB to sound more dovish in the meetings ahead, starting in September. It is too early to pre-commit for QE2, but Draghi could start preparing the ground for it by reminding markets that QE will be at least until September next year and by conditioning QE2 to the inflation outlook,” BofA projects.

Even though the US data is not strong enough, not at least yet, the major bank still foresees Euro at choppy and hectic ditch. “We are keeping our EURUSD end-2015 projection at parity. Even if EURUSD parity is not reached this year, we are confident that it will end 2015 well below the current level.” 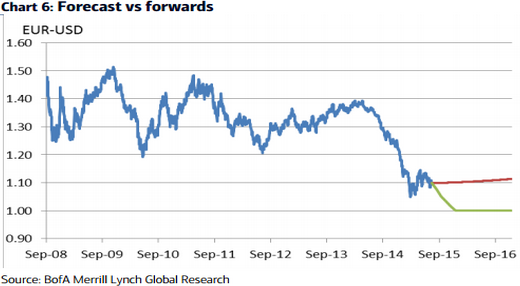 In contrary, risks regarding the Fed and ECB could fire EURUSD back towards 1.15, if the Fed would not hike this year or the ECB would send optimistic memos following its new projections, BofA adds. Yet, if Grexit risks return during troublesome negotiations for the new 3-year program, the Euro will suffer further.

Considering that the US progress and the September hike is not yet fully priced in, as investors doubt the Fed, there appears to be capacity for policy differentials to diverge anew, “pushing EURUSD closer to 1.05 and possibly below. In a Fed-driven market, the single currency should become less sensitive to risk sentiment too,” notes CA.

Technically speaking, EURUSD keeps on fluctuating in a range between 1.1113/20/29 and 1.0763/44, which needs to be broken through in order to receive fresh directions, starts JP Morgan.

“A break below the main T-zone at 1.0763/44 would re-open Pandora’s Box in terms of resuming the long-term downtrend. In this case 1.0072 would only be a minimum target,” JPM projects.