USDJPY has been on a long term bearish move since November 2017. When will the this be over? The following 3-5 April USDJPY Elliott wave analysis looks at USDJPY for the coming days and weeks.

03 April, AtoZForex - 70% of the time, markets trend or correct and 30% it moves within a range. One of the very few methods useful to identify a trend, how far it has gone and when it will end is the Elliott wave theory. Elliott wave helps to identify the end of a trend, the start of a correction, the end of a correction and the continuation of the trend. It can do these to a degree that is far above average. We will look at USDJPY and take it as our case study.

Since November 2017, USDJPY has been on a bearish trend. This is very clear. There was a small bullish recovery last week but 50% of that has already gone so far this week. The chart below shows the Elliott wave analysis of USDJPY since November 2017. 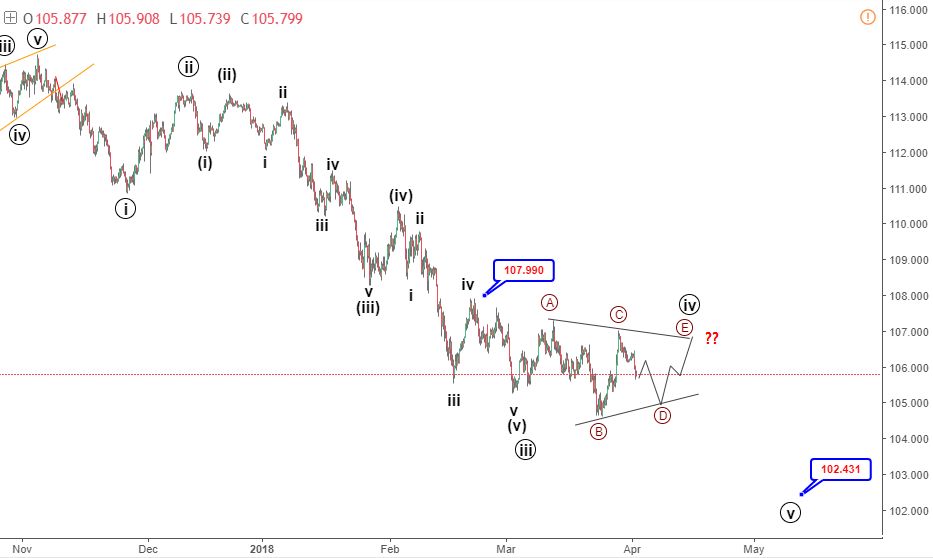 The chart above shows the price of USDJPY declining into a bearish impulse wave. How far has this gone? According to my Elliott wave count, price has completed the 4th wave just above 105. Price is probably in the 4th wave. I expect wave 4 to be shallow or sideways. This would go in line with the 'guideline of alternation'. The guideline observes that often times, when wave 2 of an impulse wave is sharp/deep, wave 4 will be shallow/sideways and vice versa. the guideline is playing well here as the wave 4 could develop into a triangle pattern. If the triangle pattern completes, price will be expected to take the final leg down before the bullish correction starts. The triangle has two more legs to complete. As you can see, having an anticipation of what price could do is very possible with Elliott wave theory and this is far beyond guess work. In the next update, we will follow the wave count and watch particularly the progress of the triangle pattern that has two more legs to complete. Be patient and stay tuned for the next update.