NZDCAD broke out of an ending diagonal pattern and has covered more that 200 Pips upside from the end of the pattern. Will price rally even stronger? The following is based on 28 November NZDCAD Elliott wave analysis.

28 November, AtoZForex – An ending diagonal is one of the most easily figured and profitable Elliott wave patterns. The speed with which price moves against the prevailing trend after an ending diagonal completes is what makes it probably the best price pattern. Personally, one of the ways I identify the viability of an ending diagonal is the price momentum before and after breakout. Once an ending diagonal pattern completes, more than 70% of the time, a strong move follows. If during or immediately after breakout, price goes sideways, I usually get out of any positions. This is my exit strategy for this pattern. I’d rather follow the >70% bandwagons than the <30% group. A strong move is also happening in NZDCAD after this pattern ended.

This month, we looked at the possibility of an ending diagonal 5th wave of a larger impulse wave. In the 8th November update, I explained how this is one of my ‘bread and butter’ favorite patterns. In fact, I spot the pattern on NZDCAD before it even completed. I spot it on 8 November and it completed on 21st November. The chart below was used in the last update – 21st November. 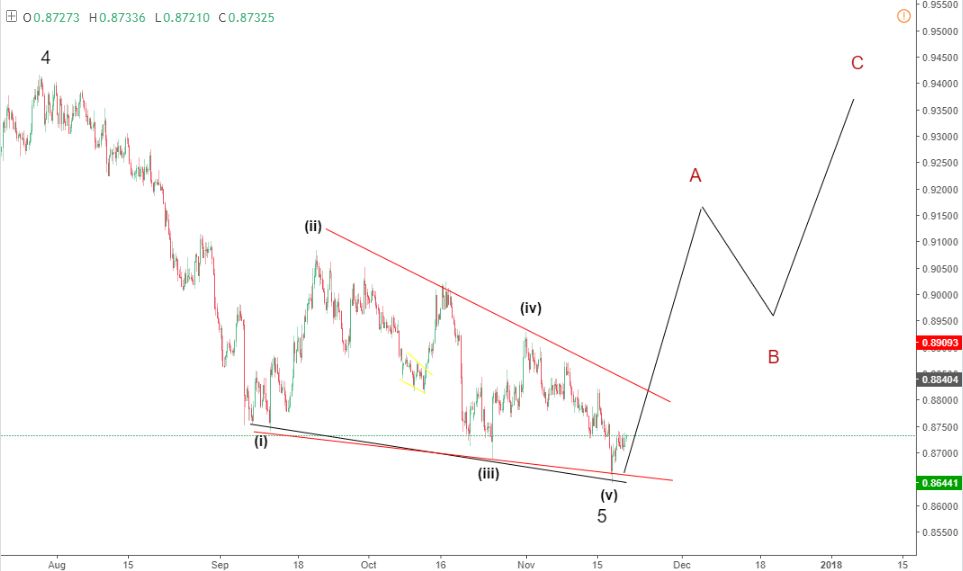 The chart above shows the 5th wave ending diagonal. The pattern has completed. The rally is slow at the moment. A strong bullish breakout is expected. Price could be on its way to 0.95 or above which is 750 Pips away. The move from 0.861 reversal point is strong and a valid ending diagonal move. With some fundamental events coming today on CAD and NZD, more volatility is expected. A break below 0.8716 could hamper the expected rally to 0.95. Stay tuned for more updates.