EURUSD committed northward to continue the year long bullish impulse wave. Seems the year will end high for this currency pair. The following is an analysis based on 28 December EURUSD Elliott wave analysis.

28 December, AtoZForex  –  We established in the past updates that the rally EURUSD embarked on this year is impulsive. We also noted together early November that price completed the 4th wave of the impulse move. The 4th wave completed with a (double) zigzag pattern. The rally was expected to continue and it did. About 3 weeks ago when I posted last on EURUSD, I had an alternative view to the popular discussed above. The rally from the end of wave 4 looked both corrective and impulsive so I felt alternatively wave 4 could go deeper.

With these two scenarios, there was need to draw the balance line. The first scenario would hold if price (which was in a falling channel) stayed 1.171 and broke upside. If this didn’t happen and price broke below 1.171, the second scenario which supported the bearish deeper wave 4 would be preferred. It took price three weeks to settle between these two lines of thought. The first scenario eventually worked out this week. The chart below was used in the second scenario of the last update. This scenario looks at the possibility of price continuing upside. Price completing wave ii of (iii). A significant break above the red falling trendline as illustrated above could bring in a bullish continuation to 1.22-1.25. This is a trend following setup and will be invalid below 1.171

Why three weeks? The correction continued downside but was held above 1.171 and still stayed within the channel. There was a breakout this week and price is soaring to break above the 1.196 top. I changed the wave count to accommodate the new corrective depth as the chart below shows. 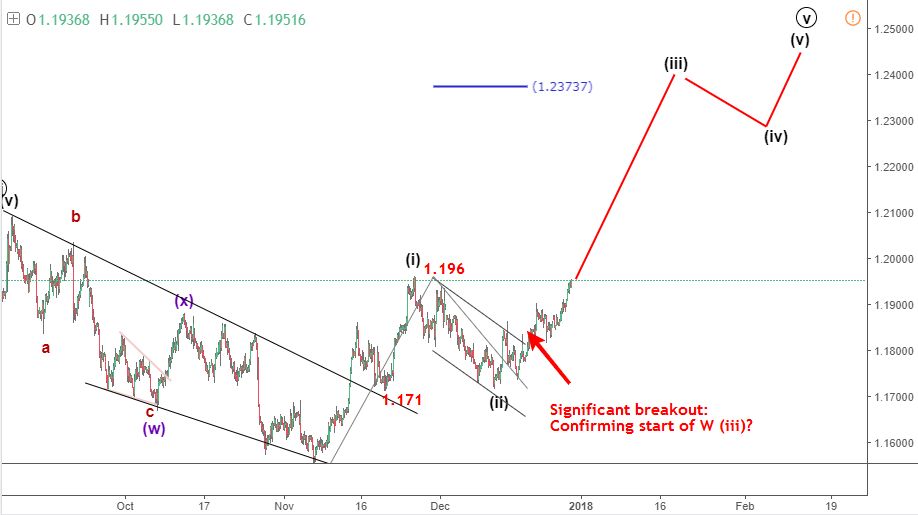 The breakout confirmed end of wave (ii) and start of wave (iii). The rally should continue above 1.196 to 1.23-1.25 or above. It’s clear that price has bottomed and a new high could happen. Stay tuned for the next update.

Do you have other views in contrast to the ones listed or you want to compliment them further? let’s know by your comment below