How is Bitcoin trading today? What are the key impact factors that will be moving this cryptocurrency? Let’s look into 27 July Bitcoin technical analysis.

27 July, AtoZForex –  Bitcoin price is delaying near the mid-range area of concern, and it appears to be bounded by a couple of the Fibonacci retracement levels.

The price of Bitcoin appears obviously to be attracting support around the area of interest at the center of its range. Bitcoin price tests 2548.34 level that develops resistance now after breaking it in the past sessions, a short-term consolidation pattern that shows that traders have once again are in charge, seeing that the Moving Average (MA100) reaches this level to attach more strength to it.

Still, there are several nearby support zones that might give way for a quick recuperation to the highs. This supports the extension of the bearish trend expectancy in the forthcoming sessions. Bitcoin price is delaying near the mid-range area of concern, and it appears to be bounded by a couple of the Fibonacci retracement levels.

Technical Indicators Indicates that the 100 Small Moving Average (SMA) is beneath the longer-term 200 SMA, so the path of least resistance is however to the downside. That is to say that the selloff is probably to stay than to reverse. Nevertheless, the moving averages are also approaching 50% Fibonacci and seem to be holding as dynamic inflection points currently. 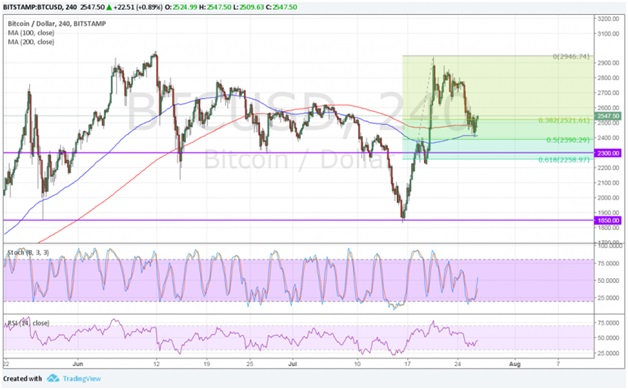 Stochastic is going up to prove that buyers are in charge once again. If happens that way, the price of Bitcoin could go back to the swing high near $2950 or even generate new highs. Nevertheless, stochastic is becoming lower to indicate that there’s some bearish pressure left for a deeper correction.

Hence, we will recommend the bearish bias on the short term. The 61.8% Fib is much closer to the former support and resistance area. A break beneath this level could leave opportunity for a fall to the range support at $1850.

THE price of Bitcoin has lost its support from the preceding week’s BIP 91 incentive as other competing cryptocurrencies are still struggling for their own versions.However, the dollar is also on weak status as the FOMC didn’t seem enthusiastic about starting the balance sheet

However, the dollar is also on weak status. This is because the FOMC didn’t seem enthusiastic about starting the balance sheet runoff or contend for rate hike come September. Rather, they modified their inflation assessment and clearly mentioned that the runoff would start “relatively soon.”