The Kiwi completed a Flat corrective pattern after an impulse wave. Based on 27 February NZDUSD Elliott wave forecast, we expect the bearish move to continue. The following also provides trade setup idea for short term traders.

27 February, AtoZForex – In the last update on 16 February , we looked at an intraday trade short opportunity after price completed the b-leg of a zigzag pattern on 15M time frame. The c-leg was expected to continue to 0.7032. There was indeed a bearish move just exactly as expected. The c-leg was supported at 0.7130- the origin of the a-leg. The b-leg was also a corrective pattern- zigzag. This shows that the b-leg is not ended yet and would be transformed into a brand new corrective structure. What could this new pattern be, as shown by the chart below. 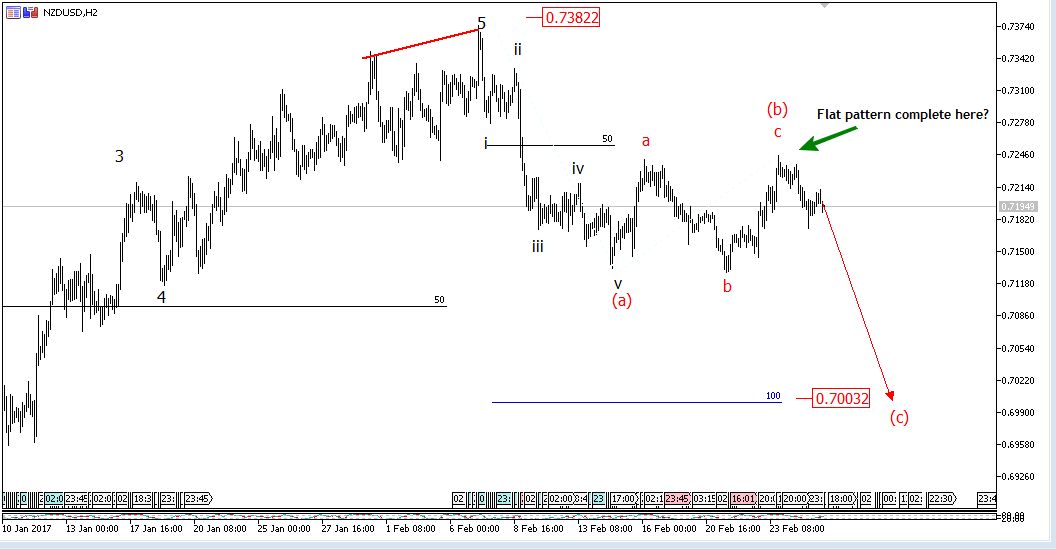 The corrective b is shown above to be a flat pattern. A regular flat pattern often displays a ‘N’ shape. The b-wave of a regular zigzag retraces almost 100% of the a-wave while the c-wave extends close to the end of the a-wave. The regular flat is a 3-3-5 pattern. This means that the a and b waves are corrective while the c-wave is motive. Price reacted to the completion of the pattern and showed signs of further bearish move. Caution should be taken when trading a flat pattern. It can be complicated because of its ease to generate into a different corrective structure. It’s good to wait for a 5-wave bearish reaction (in this case) and sell the 3-wave pullback as shown below. 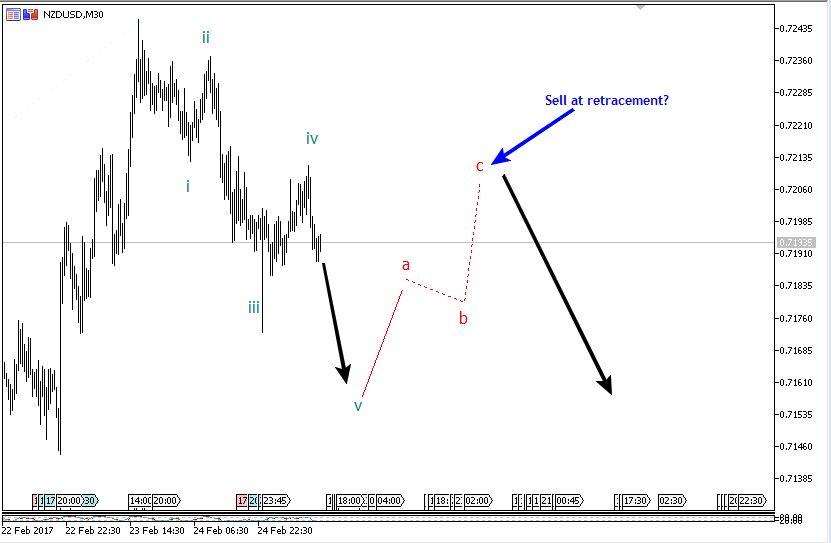 The chart above is an intraday forecast of the NZDUSD. Price is expected to dip further to 0.716-0.715 before a 3-wave rally. Waiting for a 3-wave rally could be a good decision as the flat is better confirmed. The 3-wave rally can get to 50-61.8% Fibonacci retracement of the 5-wave intraday dip shown in the chart above. At the end of the pullback, short opportunity should be hunted as price will most likely dip further to 0.7003. This pattern will be invalid above 0.7248.