Is Monero at the verge of advancing after dropping below $200? The following 27-29 March Monero price prediction looks at XMRUSD forecast based on Elliott wave analysis.

27 March, AtoZForex – Monero has completed an important price pattern – an Elliott wave pattern. There are a handful of patterns discussed by Elliott wave theory. The simplest pattern is the non-overlapping 5-waves known as the Impulse wave. Impulse waves are made up of five non-overlapping waves. According to Elliott wave theory, a 3-wave correction in the opposite direction is often seen after an impulse wave. This theory has been used by market traders and analyst – be it Currencies, Stocks, Commodities and most recently Crytpocurrencies for many decades. 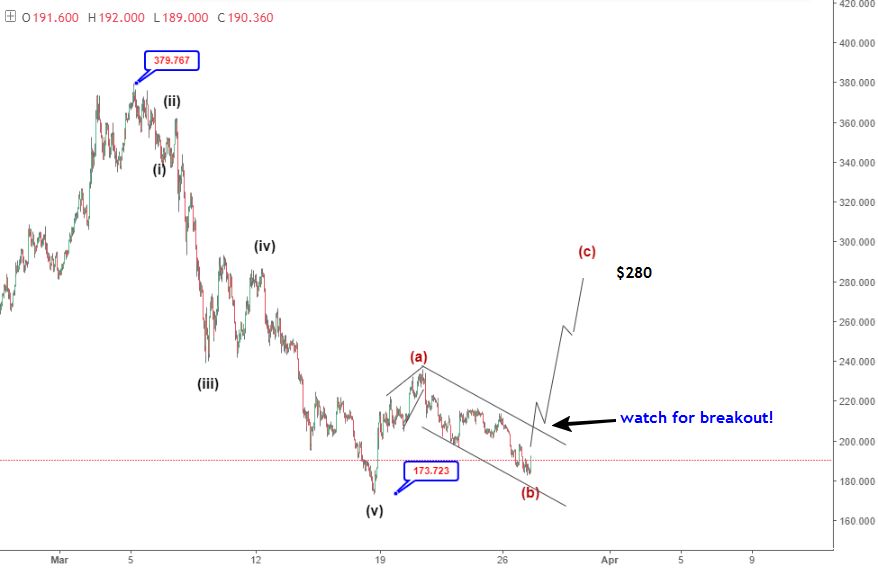 Price already reacted, rallied to above $230 before dropping below $190. Currently XMR trades at $190. The chart above shows price has already started the 3-wave correction that follows an impulse wave. Wave (a) completed just a little above $300 before dropping slightly below $190 (to probably complete wave (b)). If price moves as explained in the chart above, it would rally to $250-$300 once the wave (a)-(b) channel is broken upside. It is therefore safer to wait for the breakout before committing to the bullish move.

Conversely, if price doesn’tc make a bullish breakout of the channel but breaks downside below $170, this forecast is invalid. A break below $170 is so much likely to trigger more digging below $150.

Monero is a decentralized cryptocurrency, meaning it is secure digital cash operated by a network of users. Transactions are confirmed by distributed consensus and then immutably recorded on the blockchain.

Monero uses ring signatures, ring confidential transactions, and stealth addresses to obfuscate the origins, amounts, and destinations of all transactions. Monero provides all the benefits of a decentralized cryptocurrency, without any of the typical privacy concessions.