Gold rallied last week after breaking out of a diagonal pattern. What pattern is emerging currently? The following 26 March Gold Elliott wave analysis looks at the short and long term forecast of XAUUSD.

26 March, AtoZForex – After the FOMC meeting last week, Gold rallied from 1310 to 1350 taking about 400 pips along. Before the FOMC, price just completed an ending diagonal pattern. The diagonal pattern was the wave C of a larger degree bearish corrective pattern. Price rallied and broke out of the pattern before the FOMC but the move continued far stronger during and after the meeting. In this article, we will look at the pattern emerging currently after last week bullish breakout. Will price rally further or dip?

We will look at how Gold has behaved from the long term degree. The chart below shows a very familiar price technical structure and pattern. 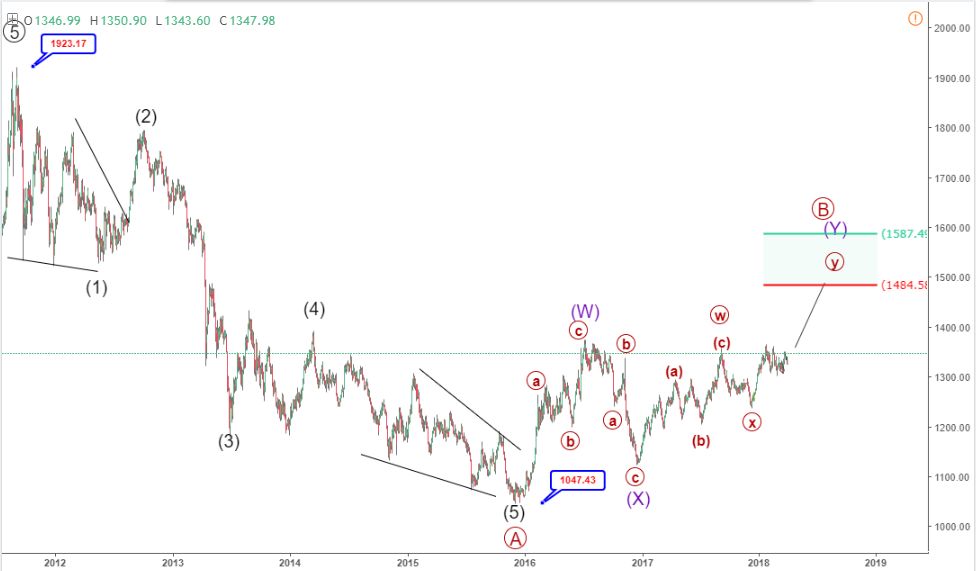 According to Elliott wave theory, price trends in 5-waves – up or down. The correction that follows should be in three waves (a-b-c). Looking at the chart above, the chart looks familiar. The fall from 1923 in August 2011 to 1047 in December 2015. That’s a textbook impulse wave pattern. All the rules are intact. There is also an alternation between wave 2 and 4. At the end of the bearish impulse wave, price started rallying upside, to complete a 3-wave bullish correction expected to follow. Our focus has now shifted to the bullish correction. The corrective rally from 1047 is expected to complete a double zigzag pattern. The earlier patterns support the formation of a double zigzag, at least for now.

Not only do we have a clue for how price could move, we also have price zone where price is expected to reverse and drop downside. 1587 (61.8% Fib retracement of wave 1-5) and 1484 (50% Fib retracement of wave 1-5) are the levels to watch out for. Price is still far from these levels, let’s look at what price is doing more closely. The chart below shows an hourly view. 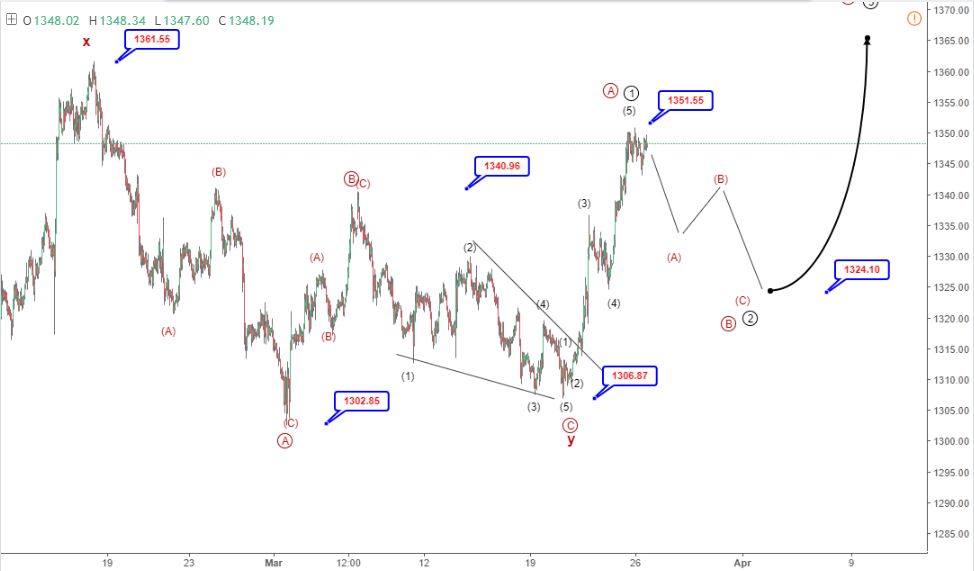 The long term bias is bullish as price is expected to complete a long term correction upside. The chart above shows price completing an impulse wave after the breakout of a Flat pattern which ended with an ending diagonal at 1306. A 3-wave correction could happen at the end of which we’d likely see Gold rallying further to break above 1351, 1361 and other tops that lead to 1484-1587 reversal zone. Stay tuned for the next update.