Yesterday, Bitcoin price has slid 10% amid investors’ concerns. What does this 26 July Bitcoin technical analysis suggest? What will be the next cryptocurrency move?

26 July, AtoZForex – The price of Bitcoin was could not show bullish momentum past its recent highs, giving the way for a test of the support levels nearby.

The price of Bitcoin maintained its negative trading on Tuesday to combat 2548.34 level & falls below it, which places the price under increased negative pressure on the short term basis, mainly after performing the triple top pattern that its signs appear on the chart.

It was consolidating tightly in a small symmetrical triangle beneath its all-time highs. Bitcoin price broke to the downside to indicate that buyers are not adequately stable to take it to new highs. This reason is sufficient to put Bitcoin on the right path towards testing the next support areas at $2300 and later at $1850.

Technical Indicators indicates that the 100 Small Moving Average (SMA) is beneath the longer-term 200 SMA so the path of least resistance still to the downside. Nevertheless, the 200 SMA seems to be holding as short-term dynamic support at the moment and it might be required that the price of Bitcoin force its way through these hurdles before sell-off to gain traction.

The following support levels are placed at $2300 following at $1850. Stochastic Oscillator is going down. This signifies that the price of Bitcoin might do the same. Meanwhile, bearish pressure remains in play.

Hence, the bearish bias will be recommended in the forthcoming sessions, seeing that breaking this level will extend losses in the price of Bitcoin, while the bearish trend will continue to be in dominance.

RSI is also moving lower to prove that traders are in charge of price action.

Still, it would be valuable to bear in mind that there’s a possibility that buying pressure could return soon. This is due to the fact that both oscillators are approaching oversold levels. 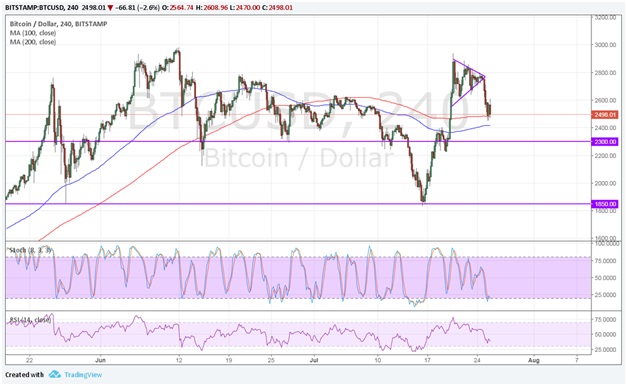 It is obvious that Bitcoin has really attracted strong support from the BIP 91 lock-in as this signals the beginning of the move in the direction of the SegWit2x upgrade. Still, dollar bulls are refusing to concede on the heels of upbeat US reports. The positive earnings and growth in fiscal reform also contribute to the trend.

The recent support for the dollar arose mostly from the Senate vote to open the debate on the healthcare bill. This would mean amendments to the current version before the final legislation to replace or abolish Obamacare is passed.

Additionally, expectations of today’s FOMC announcement are also keeping the dollar buoyant against the price of Bitcoin.

This 26 July Bitcoin technical analysis was written by Steven Sam. If you like the article, please share it.