USDJPY rallied as expected after breaking out of a complete long term double zigzag corrective pattern. The recent rally which is expected to go further is about hitting a resistance. There could be a corrective dip before the rally continues based on 26 April USDJPY daily Elliott wave analysis.

26 April, AtoZForex – After price completed a long term correction downside, a rally was hugely expected at breakout. Price is presently showing good signs of going bullish with a breakaway gap. We might have noted on this platform that the Elliott wave theory is a useful tool for forecasting and as a good trading methodology for any kind of trader and market. The chart below was used in the last update.

The chart above shows a double zigzag pattern completed between 50%-61.8% Fibo-retracement of the bullish impulse move from September 2016 to late February 2017. Wave (Y) is also completing at 100% Fibo-projection of wave (W) from (X). There is a significant bullish breakout which indicate prices rallying further.

One thing that we can’t dissociate from Elliott wave theory is the significance of Fib-ratio analysis. Fib-ratios are used together with the wave theory. Where are emerging patterns likely to end?. R.N Elliott must have had this question in mind while putting his discovery together. It would have made very little meaning if this simple question can’t be answered. The double zigzag completed at the confluence of two viable Fib-ratio levels. There is no coincidence. Markets often exhibit this property. The regularity of this occurrence is phenomenal.

The rally is about hitting a strong resistance as shown in the chart below. It will require a strong bullish drive to push above. Price may correct in the manner shown below. 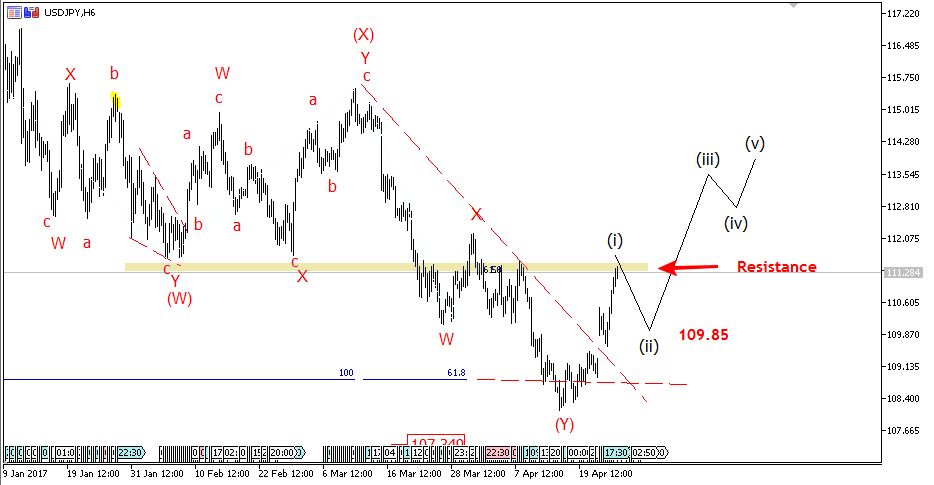 The chart above has a wave count for the rally from wave (Y). A 5-wave rally. Price may correct to 109.85 before the bullish journey resume. Otherwise, a strong bullish force will be required to bridge this level. There will be a bearish correction at any point soon- whether a bridge or a bounce. More updates will come later. Stay tuned.