Ethereum is holding above $750 and below $1000 since the last effort to break above $1000 failed. It seems the break out of these two levels would be important to determine the next direction. 26-28 February Ethereum price prediction below looks at the technical forecast of ETHUSD based on Elliott wave theory.

26 February, AtoZForex - This month has been a good one for the Crypto market. Prices recovered significantly after a fast drop in the two previous months. Ethereum that was trading around $600 rallied this month to $980. Last week on the other hand, has seen prices dropped. Ethereum dropped from about $980 to $780. Before the drop, we had already expected that after such a move, price should correct downside. Ethereum dip was expected to be limited around $750 and its neighborhood  before another round of bullish move. The next rally could see price breaking above $1000 for the first time in many weeks.

In the last update, we expected an intraday double zigzag to complete before price rallied. The chart below was used. 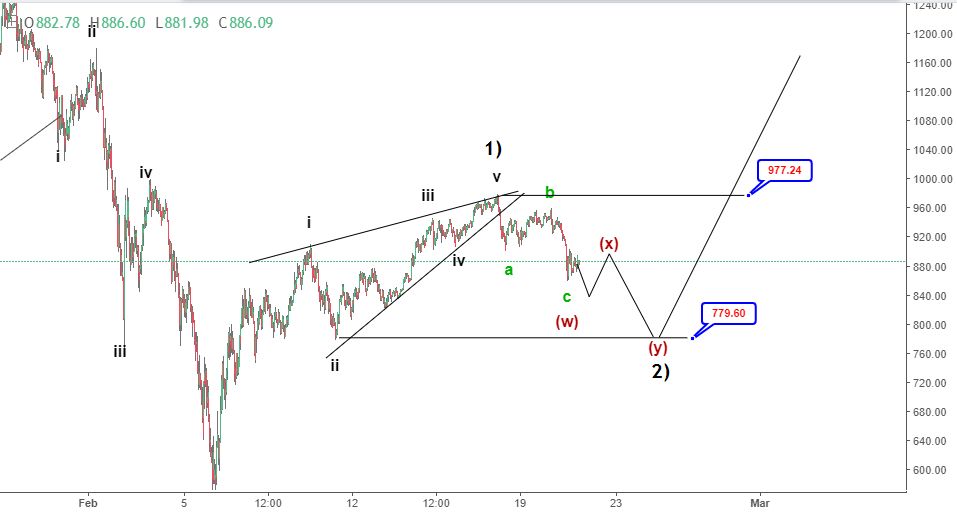 The chart above shows the end of the first rally, like wave 1 of a renewed bullish resumption. Wave 1 formed a diagonal pattern narrowed at the top. After the breakout of the lower line, a 3-wave correction is happening. Price is expected to drop back to $750-$800. It could go deeper but must be corrective. If the dip is corrective and stays above $650 with a bullish signal, we could see a new fast rally above $1000 and then to $2000. A deeper dip otherwise could send price crashing more, even below $580 low.

After the last update, it was no surprise that price dipped to $779 and rallied as expected. The chart below shows what we have now and expect to happen next. 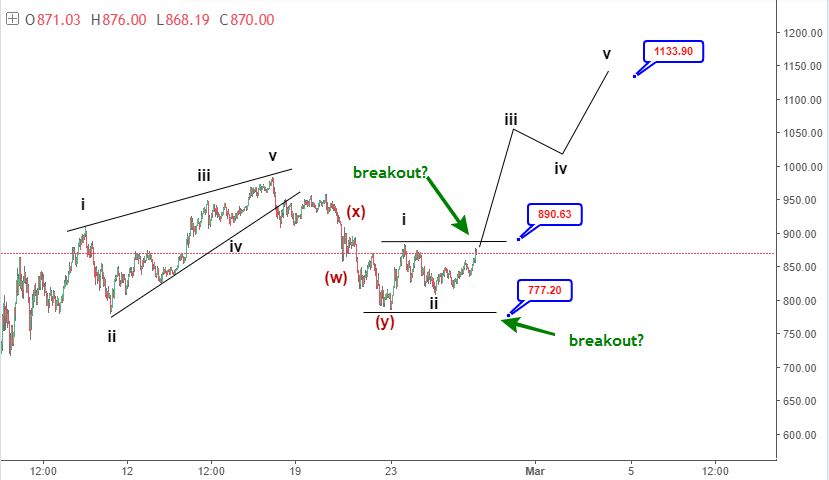 The wave analysis is playing out fine. A break above $890 as shown above could mean the continuation of the bullish move. Next bullish target is set above $1100. If price, on the other hand, is resisted below $890 and breaks below $779, further drop is expected to at least $650. Stay tuned for the next update.