Ethereum stays slightly above $1000 in the last 24 hours amid a bearish dominant move. Will price rally $1200 before the dip continues or the bullish trend will be consolidated and price breaks upside? 25-27 January Ethereum price prediction looks at ETHUSD price forecast.

25 January, AtoZForex   Ethereum was doing very well till the second half of the month. A strong rally to $1480 made ETH one of the biggest performers in the first two weeks of the year. This happened until price dropped 45% in 5 days to close around $650 on 17th January. Similar scenarios happened across the Cryptocurrency market as general market cap dropped a huge 30% in about a week.

Since the huge price dip in almost all the coins, Ethereum is recovering better than many. A 3-day 48% recovery from 17-20 January (first recovery leg) was among the biggest. Nearly 21% of the gain was eroded in the next 3 days (20-23 January) to complete the second recovery leg. From 23rd till now, price made a way up by nearly 22% for probably the third recovery leg. According the Elliott wave theory, recoveries sometimes happen in 3 legs/swings also called waves just as being seen in ETHUSD. 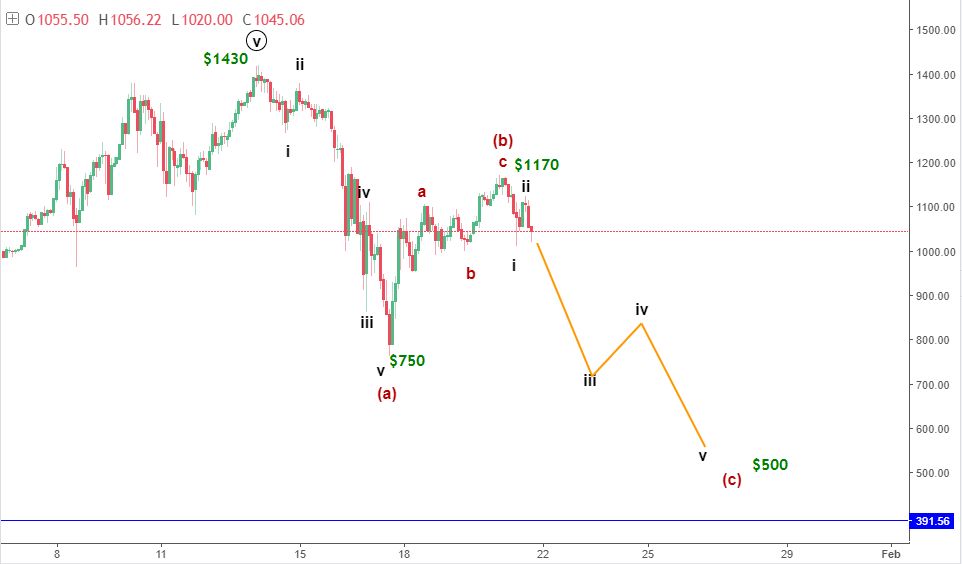 The chart above shows the drop from $1430 to $750 and the rally that follows to $1170. The pattern developing looks like a double zigzag pattern where wave (c) is about to complete. The bearish move could extend to $500-$600 before the bullish trend resumes.

In the chart above used in the last update, it was clear that ETHUSD is in a bearish corrective mood. A 3-wave dip to $500 was possible. Afterward, wave b is now emerging into something more complex, thus a need for an alternative view. Since price has not broken above $1170, the view above is still valid. What if price breaks above, which now looks more likely than before? The chart below gives a useful clue. 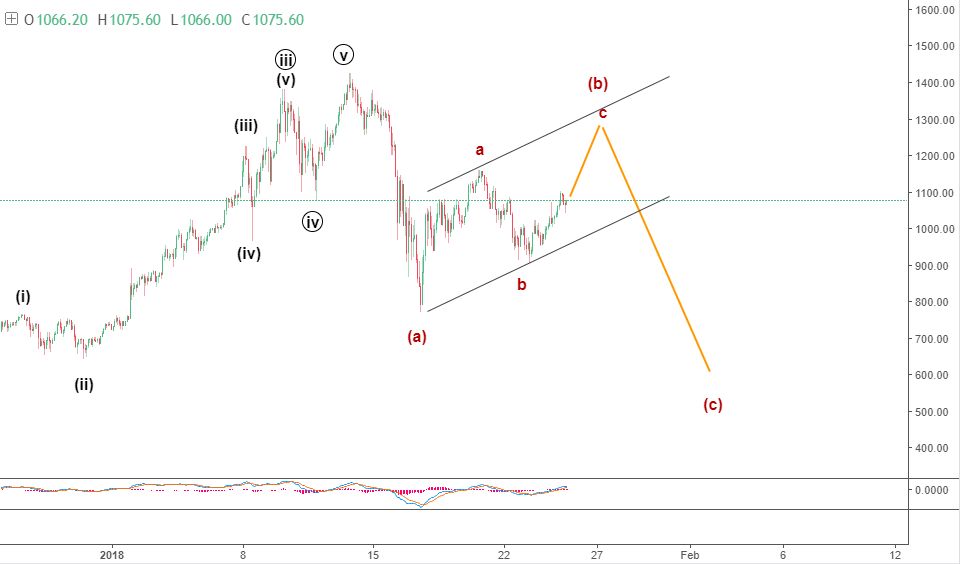 A 3-wave rally to $1300 is very possible if the 3rd leg (wave c) breaks above $1170 top. A dip could still happen afterward. If $1170 holds and price resumes downside, the last update will still stand and price could complete a wave (c) impulse wave at $500.