Bitcoin rallied to $9750 yesterday but in the early hours of today, has dropped back to $9100. Will price continue downside or resumes upside? The following 25-27 April Bitcoin price prediction looks at BTCUSD based on Elliott wave theory.

25 April, AtoZMarkets – Price resumed the bullish move this week and yesterday got to $9750 – the highest in six weeks. The rally meant BTC gained close to 50% in the last 16 days. The nature of the rally from the beginning looked optimistic for buyers. Despite higher prices expectation, at a point, we should expect price to drop after such a big move. The rally is impulsive as shown in previous updates. According to Elliott wave theory, a 3-wave correction follows an impulse wave. This is known to be common.

In the last update, price was about completing the sub-wave 4 of wave 5 of this impulse wave rally. 4th waves are usually triangles (sideways) especially if the 2nd wave corrects deep into the 1st wave. It was expected that price should break upside and at least get to $9500. The chart below was used in the last update. 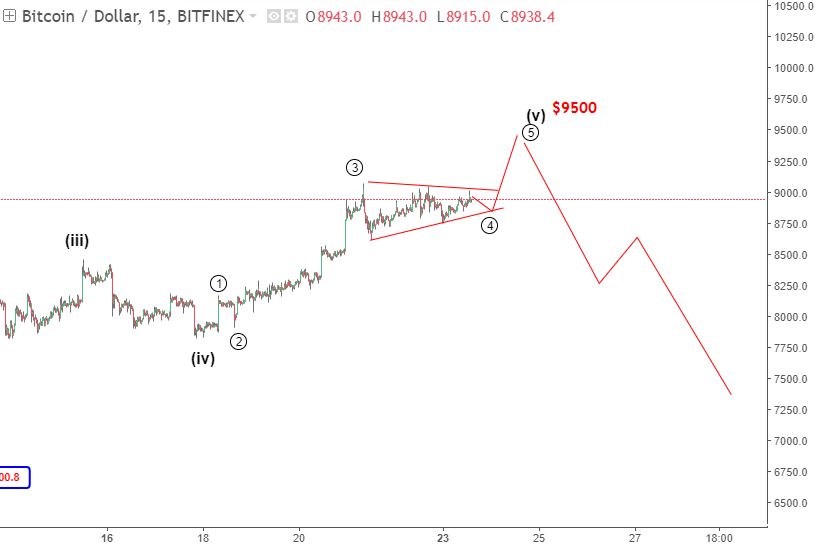 The chart above looks at the sub-waves of wave (v). Price is probably completing wave iv of (v) with a sideway triangle pattern. This suggests that price could rally further to $9500. The rally is getting to the final stages. One should prepare for a drop soon, maybe to $7500 before the rally resumes.

The above was what happened exactly. So many times, we have seen how simple triangle patterns precede huge moves. Price broke out of the triangle and hit $9750 yesterday to complete sub-wave 4 and 5 probably. Has the impulse wave completed?

25-27 April Bitcoin price prediction: what next? 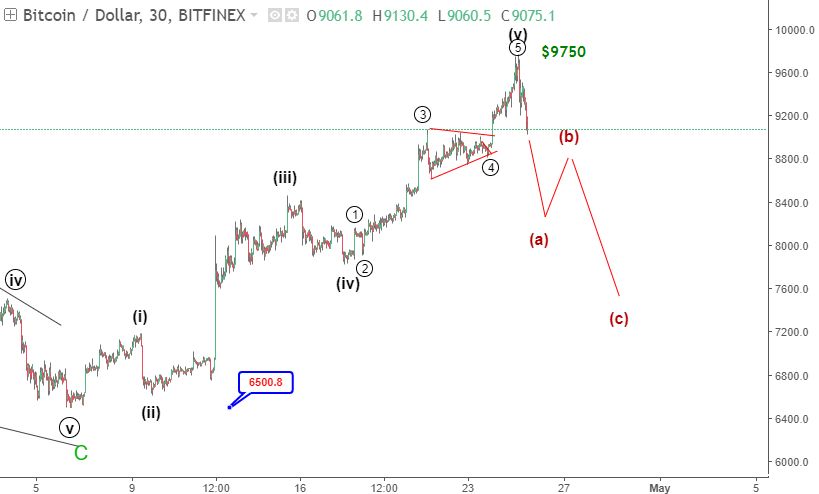 Price has been bearish so far today – losing 7% after dropping from $9750. Currently, BTCUSD trades just a little above $9000. There is a high likelihood that price would drop further. Bearish targets lie between $8500 and $7700. Unless price recovers quickly to break above $9750, a dip below $8000 is a big possibility. Stay tuned for the next update.