Gold recovered from yesterday’s intraday rally and looks like the larger degree bearish correction will resume. At the end of the bearish correction, buyers may have another opportunity to ride further. What is the likelihood of another bullish setup anytime soon?. The following give clues based on 24 May Gold Elliott wave analysis.

24 May, AtoZForex – We successfully speculated the last bottom in Gold and when price responded, we followed. Price jumped and recovered the majority of the previous loss. Gold looks destined to rally further . The bullishness has resumed until price says ‘NO’ again. Price is the best indicator of itself. It’s predictable contrary to previous notions. Price behaviors exist in patterns that are bounded together by mathematical ratios and number theory. We will use Elliott wave theory as usual to get information that we need and wait for price to validate or invalidate our claim or speculation. The risk when we are wrong is far less compared to the reward when right. That has been proved already.

In the last update, we expected an a-b-c zigzag correction downside. Price had earlier completed a bearish intraday impulse move which was to be followed by a correction upside. The chart below was used. 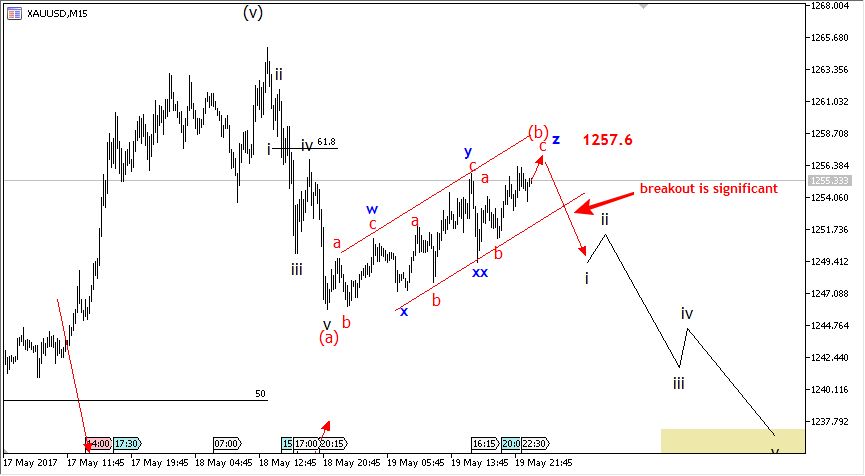 The chart above shows that sub-waves of (b) and the corrective pattern exhibiting. There is a formation of a triple zigzag. Yes!. A triple zigzag on the 15 minutes time frame for short term and intraday sellers. A break below the triple zigzag channel could present a bearish opportunity to 1233 and intraday/short-term sellers can take advantage. This will be perfect if price stays below 1257. Any high momentum rally above 1257 and 1265 will invalidate this intraday setup and take price higher.

The setup above was for intraday sellers to get in for some profits downside after price made a triple zigzag correctio upside. A significant break was required. There wasn’t a significant breakout as price rallied further giving a much higher correction yesterday. The (b) wave ended yesterday and price made a real move downside. The chart below explains better.

Price remained in the channel to 1262 before breaking  downside presenting a real selling opportunity for sellers. Price is expected to continue downside. The next opportunity is wait for the end of wave (C).