Litecoin topped above $370 early this week before dropping 3 days after. Does the coin have enough potential to limit the loss and rally further? Will there be more crashes next week? The following is the 23 December Litecoin price prediction based on Elliott wave analysis and other technical analysis.

23 December, AtoZForex - This month has witnessed a sudden price growth for LTCUSD. From the first week of the month to 19th, price rallied strongly from just around $70 to $370. That was about 430% growth in just about a week. That was really massive. Similar rallies happened in other major coins - BTC, ETH, IOTA and some others. This could also be as a result of the CME adding Bitcoin futures to its list of instruments as short term optimism developed. Three days afterward, the prices of these coins dropped. LTCUSD dropped about 53% in just 3 days traded at $174. A dip of that nature was a burst. With the way price rise and fall quickly (Burble and Burst), investors begin to see the huge risk involved in Crypto coins.

The question now is - will price dip further?. Technically, as will be soon shown, there could be more dip. I will use two highly effective technical/chart analysis tools to weigh this option.

There is a possibility of having a sharp head and shoulder pattern as shown in the chart below. This chart structure is considered by chartists as price showing signs of reversal or sharp correction. LTC holders need to be wary of this pattern completing. It could lead to price dropping further to $150 or less before any chance of advancing. 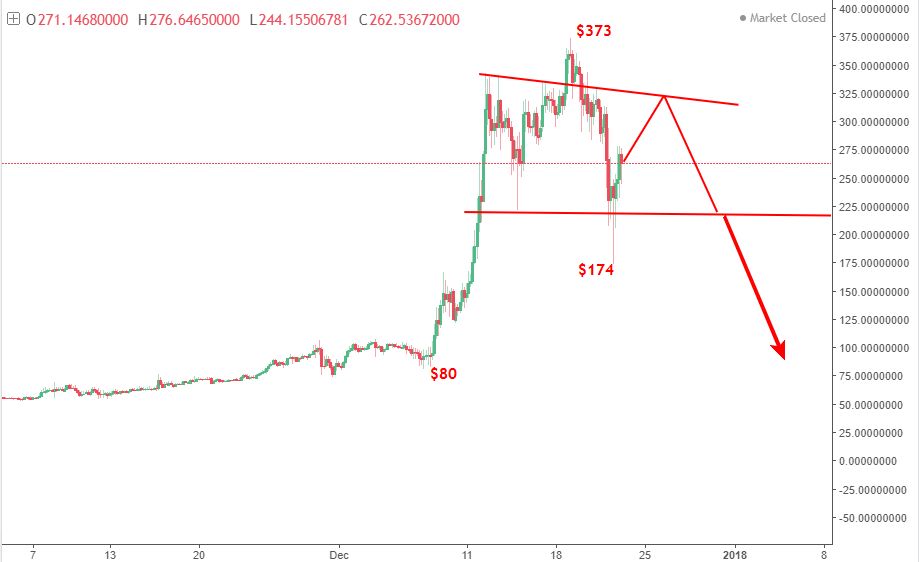 The other technical tool I will use is the Elliott wave theory. This can help to predict better how far price is expected to move. The chart below shows LTCUSD Elliott wave analysis. 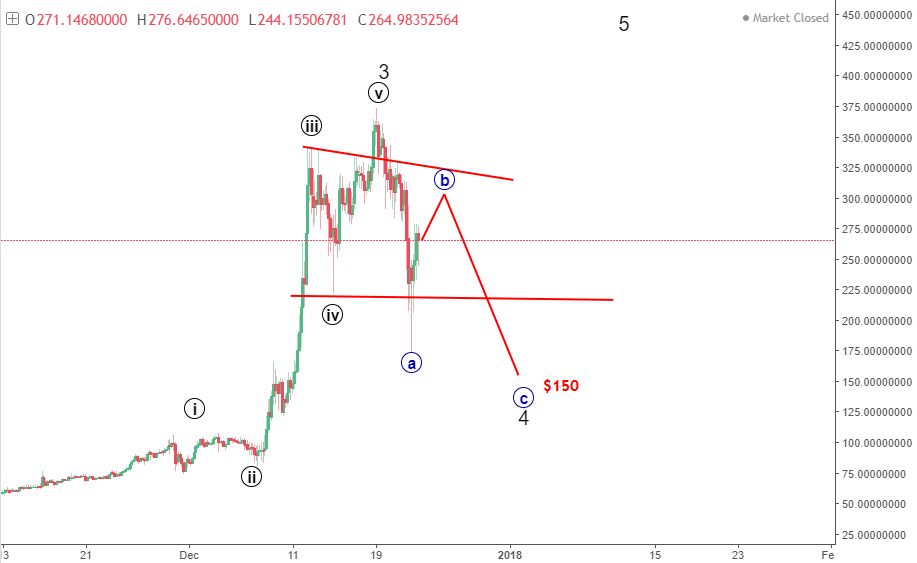 According to this forecast, price has completed the 3rd wave since LTC started. The 2nd wave was shallow, so the 4th wave should be sharp as we are seeing now (Alternation principle). A further dip to $150 is highly likely. There is a possibility that price will surge further after the dip to make a new high above $600. This could be the case for next year. Until then, we should watch this dip closely.