Today’s European calendar has preliminary PMI readings for the Eurozone, which we expect to remain broadly stable at high levels. What else is going to affect markets’ movements today? Let’s find out with this 22 September Market moving fundamental events analysis from HotForex.

22 September, HotForex – North Korea tensions are once again leaving their mark on markets, as a stronger Yen weighed on the Nikkei. Hang Seng and ASX 300 were also under pressure, as S&P cut the Hong Kong’s sovereign rating a day after downgrading China. 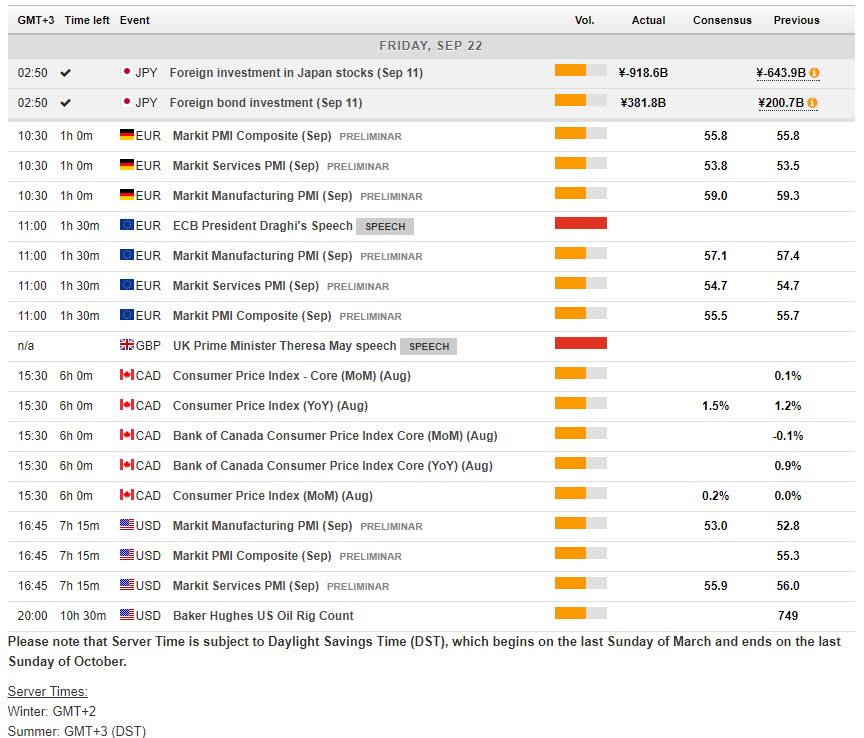 Today’s European calendar has preliminary PMI readings for the Eurozone, which we expect to remain broadly stable at high levels. Final French Q2 GDP numbers are also not expected to bring a major surprise.

The U.K. CBI industrial trends survey is also due. In Germany Sunday’s election is casting its shadow, although with everyone expecting Merkel to remain in office it is only her choice of coalition partner and the result for the right wing AFD that is creating excitement in what has been dubbed a very boring election campaign.

The dollar has traded softer, correcting some following the sharp gains seen in the wake of the Fed’s hawkish turn on Wednesday.

EURUSD nudged above 1.1960, up over a big figure form the post-Fed low.

USDJPY tipped to a low of 111.65, correcting after rallying in eight of the previous nine sessions and putting distance in from yesterday’s two-month peak at 112.71.

EURJPY and other yen crosses also posted losses. The BoJ’s reaffirmation at its meeting this week of its commitment to yield curve control and ultra-accommodative monetary policy, in general, may be an endorsement for yen bears.

North Korea’s advance to becoming a nuclear power remains a wildcard risk for yen bears. The Japanese currency will typically rally amid any heightening in geopolitical tensions. This week’s trading of verbal barbs between Trump and Kim won’t have done unnoticed by market participants.

US North Korea tensions are in place

New executive orders on N. Korea that target individuals and companies who trade with the rogue nation. He confirmed that the PBoC has ordered Chinese banks to cease business with the region, while the effort will also target N. Korea’s shipping and trade networks.

The leaders of Japan and S. Korea backed the tighter stranglehold, and they plan to discuss further means to halt N. Korea’s ability to produce a nuclear arsenal. Though Trump remained open to further dialogue with N. Korea, it’s not clear that this will reduce tensions in the meantime as prior UN actions prompted further missile salvos over Japan.

US Reports Yesterday revealed a robust 23.8 September Philly Fed figure that exhibited the same hurricane updraft seen in last Friday’s Empire State report, and we now expect the average of the producer sentiment surveys to reclaim the 57 cycle-high in September that was seen in February and March, versus still-lofty 55-56 figures over the interim.

We also saw a surprising 23k drop in initial claims to a still-elevated 259k in the week of Irma, which was also the BLS survey week, though the mass-displacement of individuals and loss of electrical power may have delayed applications for claims.

Claims are averaging 274k thus far in September and we expect a 272k average when the month is over, versus an August average of 246k in August. We expect a 90k September nonfarm payroll rise that assumes a 100k Irma hit. We also saw a 0.4% August rise in leading indicators that left a 12-month string of gains.

Eurozone PMI  – Consensus is for an unchanged composite PMI reading for September, with an expected correction in the manufacturing PMI likely to be compensated for by a slight rise in the services sector reading. German ZEW investor confidence already improved again in September, while today’s preliminary consumer confidence number rose to the highest reading since 2001.

CAD CPI  – Expected to grow 0.2% in August relative to July, leaving a pick-up in the annual growth rate to 1.6% in July from 1.2% in July and the year low 1.0% pace in June. Gasoline prices snapped higher in August, which drives our projection.

May and Draghi Speeches –  UK PM May is speaking in Florence and rumours are swirling of a speech to cement her authority at home and with her own party as well as an olive branch to the EU to finally kick start the Brexit negotiations – watch sterling to day and for follow through on Monday.  Draghi has a speech earlier in Dublin and is likely to avoid direct comments on monetary policy, but always one to watch.

This article about 22 September Market moving fundamental events was written by Stuart Cowell, Market Analyst at HotForex. The provided article is a general marketing communication for information purposes only. It does not constitute an independent investment research. Nothing in this communication contains an investment advice or an investment recommendation. It also does not contain a solicitation for the purpose of buying or selling of any financial instrument.