EURNZD continued its bullish run last week after a brief dip. The rally seems to have been exhausted or probably close to it. The following shows an imminent bearish movement in the coming weeks based on 22 May EUR NZD Elliott wave analysis.

22 May, AtoZForex  The bullish move in the recent weeks was well analysed in the last update when we expected a dip in the mood of 1000 Pips. There was a dip just as expected but far from 1000 Pips before price rallied even further. There is something about Euro calling for a bearish move in the coming weeks. Most Euro pairs and nearly at their peak and to be followed by a bearish reversal or correction. EURNZD could be one of the most volatile in the coming weeks with 1000 Pips potential. Let’s revise the last update where the chart below was used. 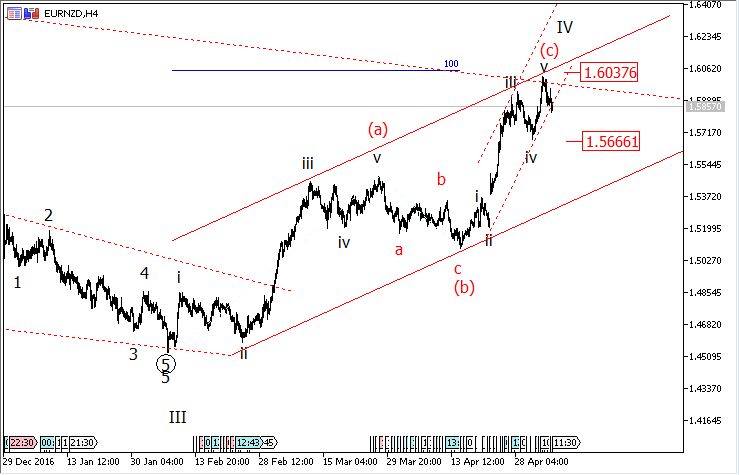 Price dipped below the smaller channel for bearish opportunity. The move didn’t last as price was way above the bigger channel that would have probably given more confidence of a huge profit. The chart below was the bigger picture also used in the last update. 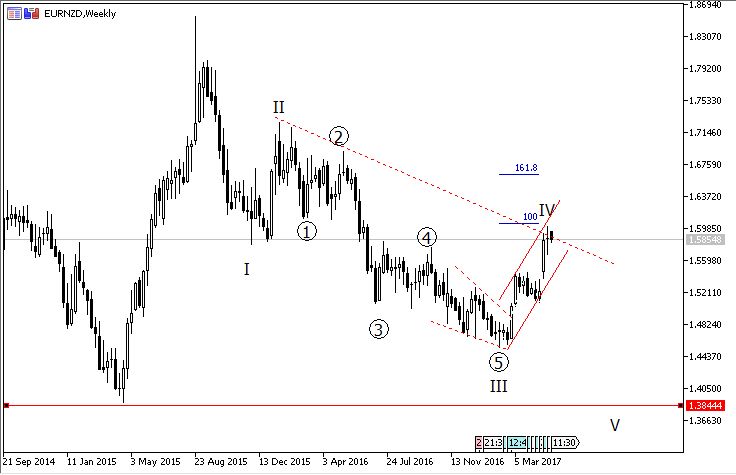 The chart above shows how price dipped from September 2015 to March this year. It was a clear uncompleted impulse wave i.e wave 1-3. Wave 4 rally started in March. Wave 4 is almost encroaching into the territory of wave 1 with the wick of a candle. This happens sometimes.

The stronger rally violated this count as wave 4 went strongly into the territory of wave 1 which negated the rules of an impulse wave. So what next?. Can we then label the rally as impulse wave?

22 May EUR NZD Elliott wave analysis: what next?

The chart above shows an impulse wave advance. The minimum fall, if it happens, is expected to be at 1.5. A break below the broken inside channel could be a good entry for sellers. There is also an engulfing pattern on the daily that could give an alternative entry plan. If price breaks below the outer channel, the potential down is huge and could get to 1000 Pips. More updates will come later. Stay tuned.