Is it time to buy XLMBTC? The following 22 March Stellar Lumens price prediction suggests price might have hit a bottom. This analysis is based on Elliott wave theory.

22 March, AtoZForex - According to Elliott wave theory, price often corrects in the opposite direction after the formation of a trend. The trend is known as the motive wave (Impulse wave or ending diagonal) while the correction as corrective wave (Zigzags, Flats and Triangles). So, what Elliott wave basically says is this: when price moves 5-waves up, it corrects 3-waves down or vice versa. At the end of the 3-wave correction, a cycle is said to have completed and price is expected to continue in the direction of the trend. It's that simple. We will use this same wave format for XLMBTC.

Stellar lumens also known as XLM  is ''a platform that connects banks, payments systems, and people. Integrate to move money quickly, reliably, and at almost no cost'' according to Stellar.org . XLM currently trades at 24 cents or 0.00002763 Btc. Stellar was close to hitting $1 (91 cents with over $16 billion in market cap) in the first week of January before price fell to the current price. It had earlier gone down below 19 cents, with $3.5 billion in market cap, last week before a bullish ''bounce off''. What should we expect next? 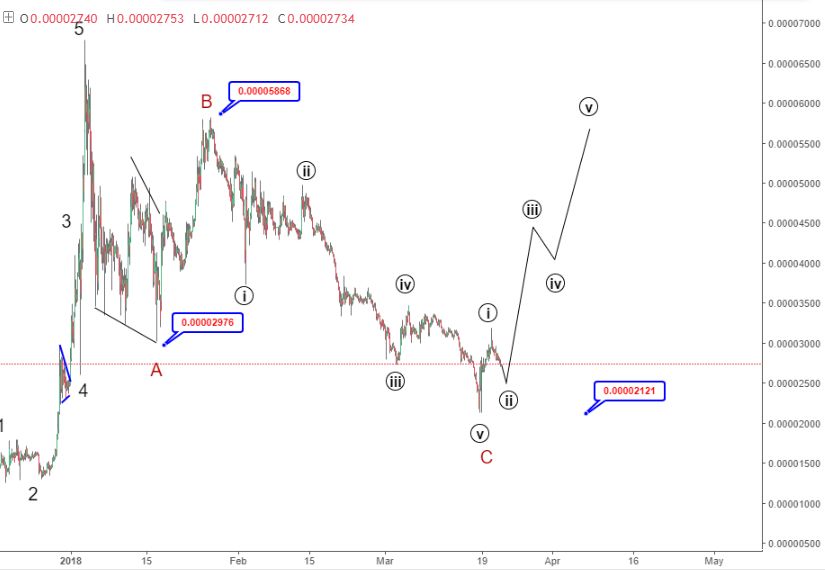 The chart above shows an impulse wave during the big rally till 4th January. The dip that followed shows a classic Zigzag corrective pattern which could have ended already. Wave A ended at 0.00002976, wave B ended at 0.00005868 and C wave was extended to 0.00002121. Wave C is a clear impulse wave. This wave structure shows that Lumen could rally well against BTC in the coming weeks if the wave cycle is completed as expected. A new high is very likely to happen. Even if there is no new high, I expect at least a 3-wave rally to 0.00004 or higher which can give 2000 Satoshis or more for buyers. Stay tuned for the next update.