About 80% of Bitcoin has already been mined. At the moment there is only 20% of the 21 Million Bitcoin Cap left to be mined. Is this the trigger that Bitcoin price needs to soar to back to $20,000 and above?

15 January, AtoZForex –  In January 2009, Bitcoin creator Satoshi shared the idea to have a capped supply of Bitcoin within a particular time frame. The Blockchain technology was used for mining and miners were to be rewarded 12.5 Bitcoins for every block mined. At the time the target was set on 21 million Bitcoins, after which mining activities will stop. Thus what will happen to Bitcoin and the miners’ community when this happens?

The idea was to create a free, tech-made, people-oriented digital currency that will have a store of value. Money has value when it’s scarce and demanded. When the supply exceeds the need for money, its value gets redundant. Thus, Satoshi’s idea made perfect sense.

How much is left from the 21 Million Bitcoin Cap to mine?

Over the years, the demand for Bitcoin has skyrocketed. Despite, the difficulty of mining increases and the mining reward decreases, the popularity of Bitcoin keeps growing. The demand still exceeds supply, therefore, Bitcoin’s value is still increasing. As the mining reward continues to decrease every four years, the rewards will eventually drop. Analysts believe that the rewards will drop to zero in the year 2140,  by that time all 21 million coins would have been mined.

On the 13th of January, 16.8 Million Bitcoins have been mined which account for 80% of the total 21 million coins. Since this milestone, over 3000 coins more have been mined in the last two days. There are now less than 4.2 millions to be mined and this could trigger a jump in Bitcoin prices. 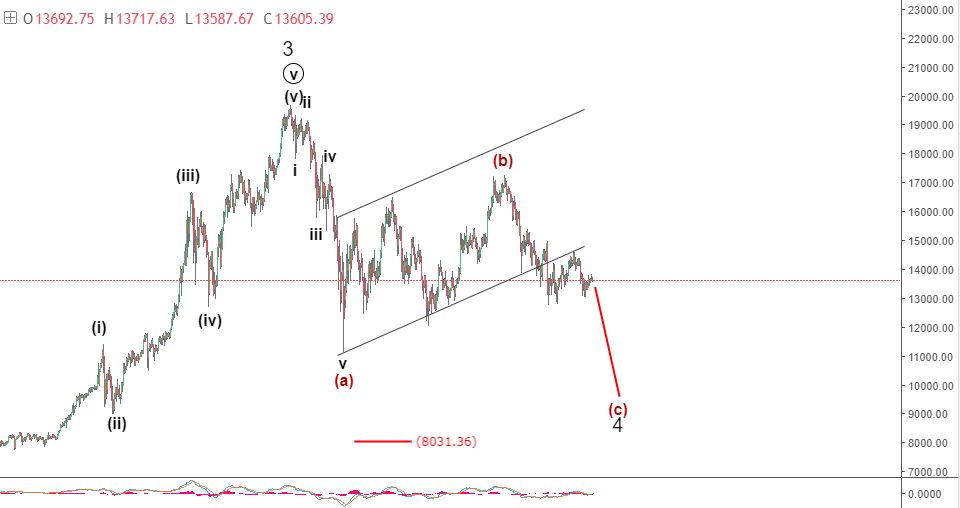 From the Elliott wave technical analysis’ perspective, the near-term direction of Bitcoin is still on the downside. Since the turn of the year, the price has completed a corrective zigzag wave (b) of 4 – 4th minor wave. The wave (c) is projected to be around $8000-$9000 before the rally continues. This is the biggest correction since January 2017. Once the correction completes, there is a high likelihood that price would fly to break above $20000 and head probably to $50000 in the coming months.