GBPAUD about to take a bullish move in the region of 500 – 1000 Pips or even more. The 6-weeks old correction is showing signs of completion and price could rally to continue the bullish resurgence seen in March-May. What corrective pattern has emerged and how far could the rally go? The following analysis is based on 21 June GBP AUD Elliott wave analysis.

21 June, AtoZForex –  The basics of Elliott wave explains trends as a progressive 5-wave and corrections as 3-wave that move counter-trend. The 5-waves and 3-waves come in different patterns that are well-defined with rules and guidelines. Each pattern also has its own familiar look easily recognizable. There was a rally in GBPAUD from mid-March to mid-May, almost 2 months of impulse wave. A 3-wave correction followed as expected. The correction is almost one and half month. The corrective pattern formed is swift and a good bullish momentum will set price to resume upside. The chart below shows the impulse wave and the corrective wave that followed. 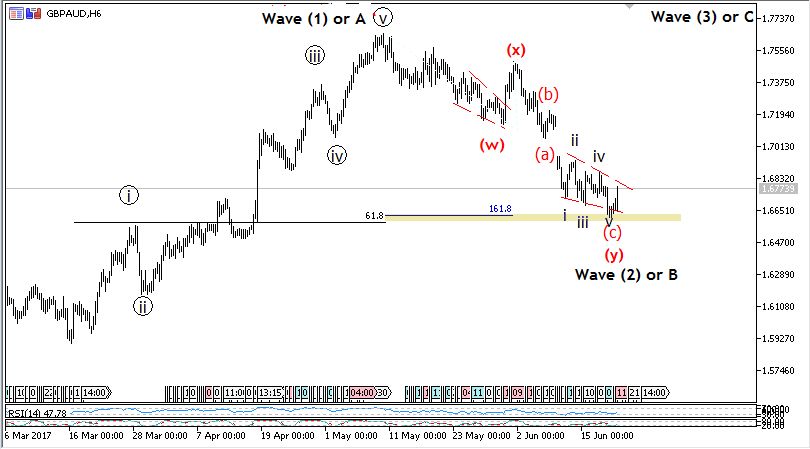 A double zigzag to 1.6600 followed the impulse wave rally. There is a high likelihood that price will resume upside for wave (3) in case of a larger degree impulse wave or wave (c) for a larger (a)-(b)-(c) deeper correction upside. Aside the complete pattern, price seems to be rejected at a Fibo-confluence zone- 61.8% retracement of the preceding impulse wave and 161.8% Fib-extension of wave (w) from (x). 61.8 is know as the golden ratio and 161.8 its inverse. That these two ratios are lying close together says something about 1.6600 zone. When an Elliott wave pattern completes at such zone, it speaks more volume.

Price, unsurprisingly, is reacting to this effect with good momentum. There is also a diagonal mouth at the end of wave (c) of (y). You must be used with diagonal patterns now and how effective they are. The chart below shows the diagonal mouth clearly. 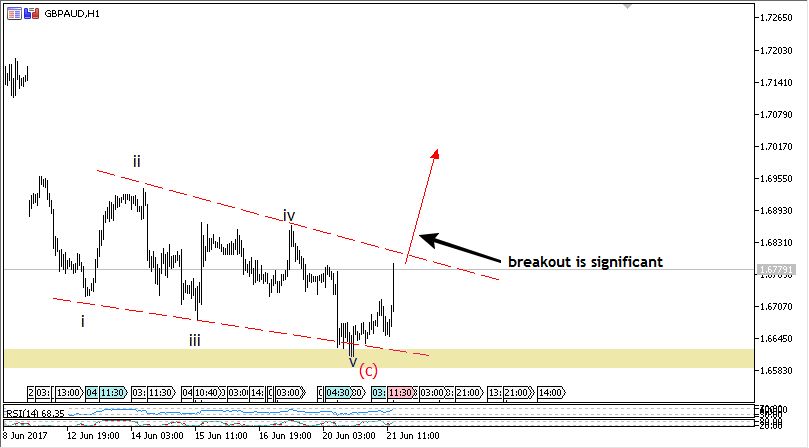 Diagonals are followed by high momentum breakout. A strong bullish breakout could just be the beginning of a strong rally that could put 500-1000 Pips for buyers