December 21, 2020 / AtoZ Market  - The week opened again with another bearish GBP gaps. GBPUSD gapped down by over 120 pips. In the early hours of the London session, the dip continued by another 145 pips as the currency pair hit 1.32. Although there has been a reasonable bounce above 1.335 as the New York session winds up, the near-term sentiments favors the south.

Why are the GBP pairs opening with bearish gaps? It's quite simple. The last 3 Sundays are the soft deadlines for the Brexit talks ahead of the December 31 official deadline. Therefore, a lot are happening during the weekend, before the market opened for the new week. The two parties are yet to find a common ground. During the last Sunday meeting, three points of contest are yet to be resolved.

A UK official told BBC that the EU has to soften some of its stands to allow for a successful negotiation. It seems the ball is in the EU's court as the UK is not ready to make any compromise. The last meeting between the UK PM and EU president is more of the former persuading the latter and not to solve issues amicably. The deadline is just 10 days to go. The market is already divided - swinging between a deal and no-deal sentiment as the headlines dictate.

Over the weekend, the UK government said it discovered a new strain of Covid-19 which has now gone 'out of control'. It's not yet known whether present vaccines can deal with the new strain which is more transmissible according to the report. As a result, there have been restrictions on flights to or from the UK. This gave a solid boost to the dollar as it gained over major FX early in the London session.

Overall, it seems the Cable will drop further this week especially if Brexit is not finalized. By Friday to Sunday, a no-deal could either means the UK would exit with a deal or the December 31 official transition date would be extended. Doing this deal in the last week would be much more difficult. We should therefore expect more pressure on the GBP if we are not nearing a deal. 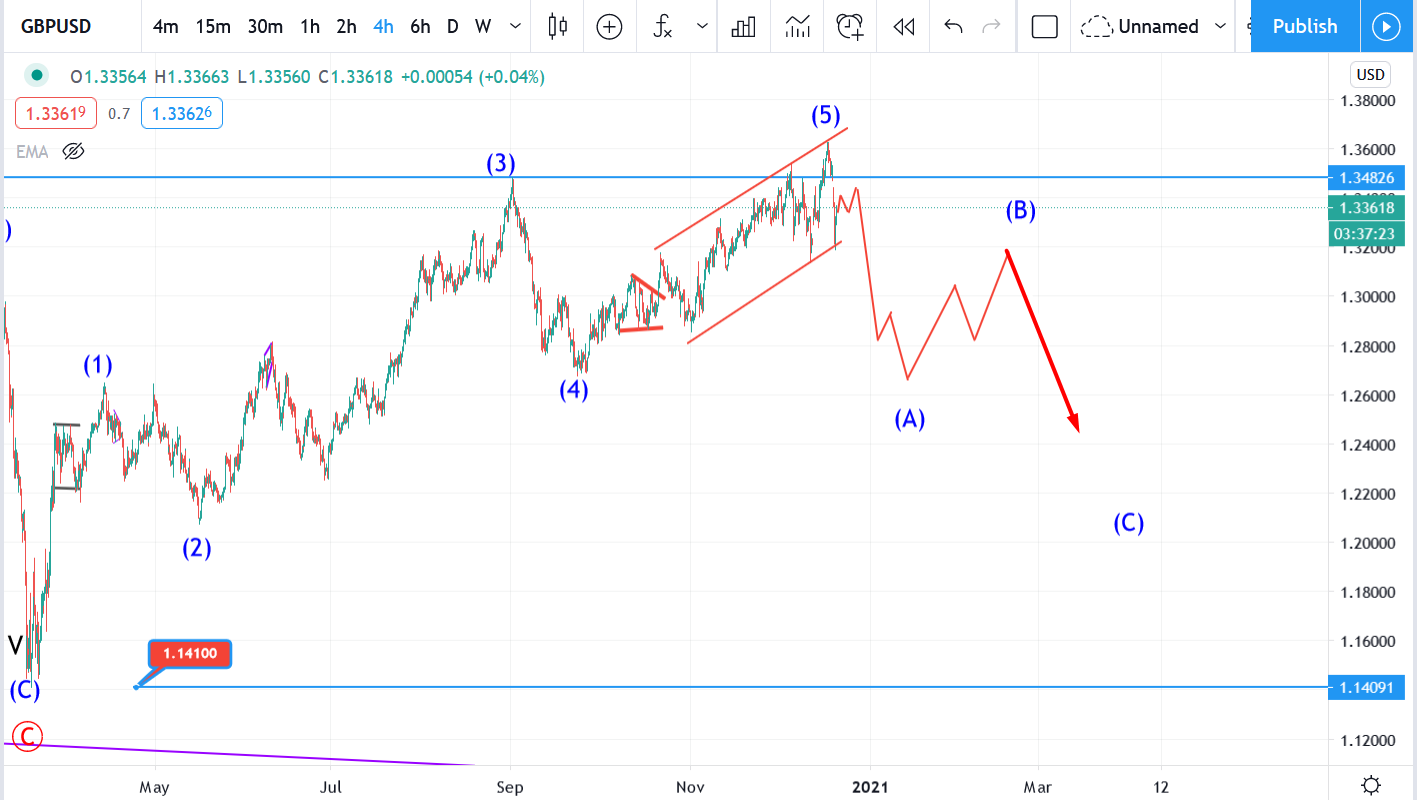 Technically, GBPUSD is turning bearish. From 1.14 (March 2020), we could count a bullish impulse wave pattern developing. As the 21 December GBPUSD Elliott wave analysis chart above shows, the 5th wave has probably completed an ending diagonal pattern just above 1.36. From the most recent top above 1.36, we could start counting a bearish correction. The current intraday bounce could fill the 1.344 to 1.347 gap. Other GBP pairs display similar bearish pattern.

Forecast: What to Expect from the Euro and the Dollar in 2022
Broker of the month!