After a bullish breakout identified in May, the Aussie has soared more than 700 Pips ticking above 0.806. Will the recent intraday bullish move lead to a break above the 0.806 top?. With the following, we look at the Aussie based on 21 August AUDUSD Elliott wave analysis.

21 August, AtoZForex - At the end of last month, price topped at 0.806 after months of strong rallies. The drop from 0.806 looks more corrective than impulsive. If the corrective pattern holds, we may see price flying higher to break above 0.806 top. Looking at the rally from a longer term frame, seems a bullish impulse wave is not complete yet. The general trend is still upside until price shows otherwise. We can analyse the occurring impulse wave and the corrective drop. 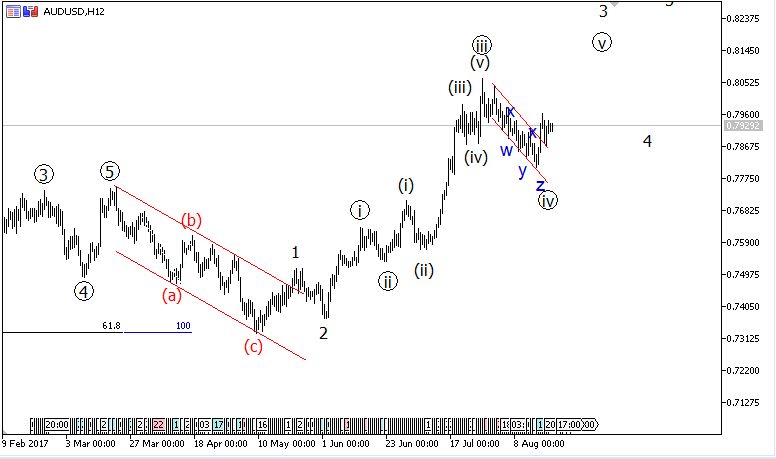 The chart above shows an advancing impulse wave. The 3rd sub-wave is probably not yet complete suggesting more move upside. We won't be surprised if Aussie rallies further in the coming weeks and months. How can buyers take advantage of the rally?.

It's important we identify what pattern completed the recent dip. According to Elliott wave theory, corrections can either be triangles, zigzags or flats. Zigzags are known for their sharp nature while Flats and Trianges are sideways corrective patterns. Zigzags can be simple or complex. The two complex zigzags are double and triple zigzags. The drop from the beginning of this month seems to exhibit the properties of a zigzag pattern. The chart below shows which of the zigzags. 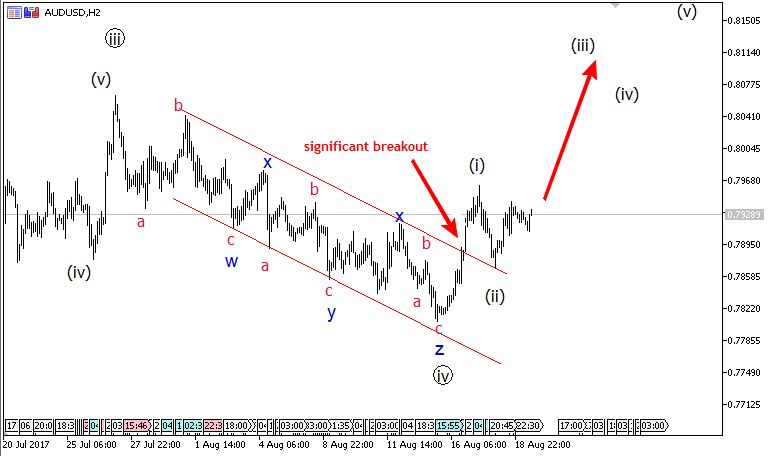 The pattern is a corrective triple zigzag pattern. Triple zigzag patterns are made made of 7 waves - 4 waves in the direction of the correction and 3 against it. The triple zigzag pattern is often contained in a channel. Price reacted swiftly to this pattern and broke upside. With the pullback to 50% of the breakout, it seems the rally will resume unless it returns and breaks below 0.78 which is not very likely based on the present price action. Stay tuned for the update.

Should you trade using Elliot wave on your own at all?

Before you start trading Elliot wave, you'll want to read this.