Get VIP Trading Signals Market Watch
Trade Now Your capital is at risk.
As an investor, you should know several 2020 Bitcoin halving facts to make a profit from the price movement. As the Bitcoin price is new in the investment world, there are many risks & uncertainties associated with it. So before proceeding to invest, You should know the facts earlier.

November 1, 2019, | AtoZ Markets- The third  Bitcoin “halving” in history is coming up in 2020. If you bought Bitcoin in the last few weeks, you should know the 2020 Bitcoin halving facts to minimize the crypto trading risks. The world's No. 1 cryptocurrency Bitcoin may reach  $20,000 again or it may collapse due to the inflation effects.

A Bitcoin halving (sometimes named as ‘halvening’) is an event where the reward for mining new Bitcoin block is halved. After a halving, the miner receives a 50% lesser Bitcoin for verifying the transaction. The schedule of Bitcoin halving occurs in every 210,000 new blocks. The Bitcoin halving requires four years until the maximum supply of 21 million Bitcoins.

Among the Blockchain Industry in 2020,  the Bitcoin halving is a very important event for traders as it reduces the earning from the Block reward. This process limits the total supply of new coins so that prices could rise if there is enough demand. In the months before and after previous halvings, Bitcoin’s price increased heavily. However, the environments of each halving are different and demand for Bitcoin can vary wildly.

Why you need to understand the Bitcoin halving

Bitcoin is a finite asset and it takes time and energy to produce. These properties compare the Bitcoin with Gold. The supply of new coins drastically reduced after every halving. In the previous halving, this event caused the Bitcoin price to surge.

If the demand for an asset remains unchanged, but the availability decreased, the asset’s price will go up. This law of supply and demand works for this event mostly. The price increases more with the demand, increasing at the same rate.

However, past performance is not a confirmation of future results. Bitcoin may enter bear market territory around the time of a halving and vice versa.

Only time will tell how the market reacts at that time. Nevertheless, the one thing is certain in 2020 Bitcoin halving facts: this halving is an important date for the cryptocurrency trader.

2020 Bitcoin Halving Facts You Should Know

It is essential to understand the probabilities before proceeding to any investment. The flagship cryptocurrency Bitcoin spike to  $20,000 again or plummet due to the inflation effects.

#1 Review of the Previous Bitcoin Halving:

At the time of the first halving, the entire Bitcoin’s market capitalization was too small to be noticed by institutions. Moreover, about 1 year later, Bitcoin’s price had fallen from $31 to $2. Then the price started to rebound in November 2011 and continued to move higher through the halving in 2012. In November 2013, it reached an all-time high of over $1200. Later on, Bitcoin had another downfall at the end of 2013 and lasted until 2015. After 8 months ahead of the next halving in July 2016, Bitcoin’s price started to improve.

During this time, several hedge funds & venture capital companies became involved in the cryptocurrency investment along with the millions of retail investors. This involvement ultimately pushed the Bitcoin price at nearly $20k in December 2017. 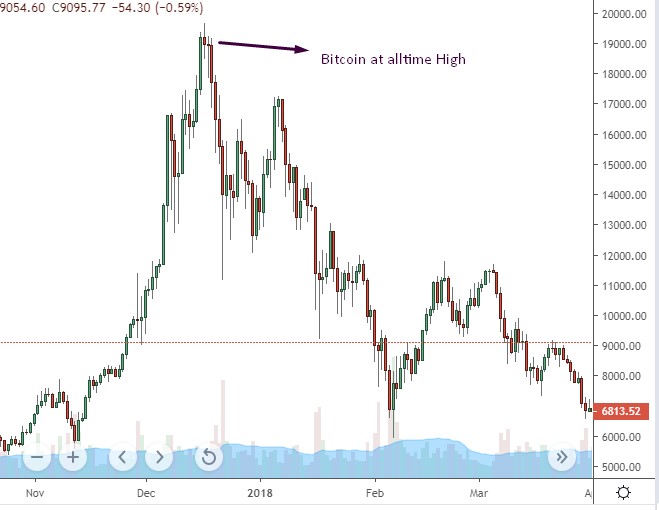 The next Bitcoin halving is going to happen at the end of May 2020. However, you should keep in mind that the date of the halving does no set by the normal calendar. The number of blocks that have been mined determines the date. The halving date might happen later if the miners failed to build 210,000 new blocks.

The Bitcoin halving in May 2020 will be the third halving for the following cryptocurrency.

The first halving happened in November 2012. Then after 4 years, the second one happened in July 2016. Both halvings were the precedent for a significant wave of Bitcoin acceptance.

However, the characteristic of Gold and Bitcoin is mostly the same by nature. That allows the Bitcoin to name as “Digital Gold.”

#5 Bitcoin mining per day after 2020 halving

The current block reward is 12.5 Bitcoins per block and the block time is 10 minutes. In this calculation, miners are currently generating 1,800 Bitcoins per day.

After the 2020 Bitcoin halving, just 900 new Bitcoins per day will halve.

#6 Number of Bitcoins at the time of the halving?

Another important thing you should know in 2020 Bitcoin halving facts is the number of Bitcoin at the time of halving. There will be a total of 18,375,000 Bitcoins at the time of the 2020 halving.

Moreover, this halving will provide approximately 85% of the total Bitcoin supply. However, there are many estimates that over 25% of all Bitcoins have been already lost. If this happens, there would only be around 13,700,000 Bitcoin available. That is not even 0.002 Bitcoin for every human.

#7 Bitcoin price at the time of halving

There are two possibilities of the price movement during the 2020 Bitcoin halving:

The previous two halving rallies were mostly fueled by retail money which was encouraged by the security of the Bitcoin. However, in this time the large institutions (like NASDAQ, Fidelity and JP Morgan), are creating their Bitcoin investment infrastructure before the Bitcoin halving. It is ok to think that they will be offering Bitcoin as an investment option for their clients.

The efficient market hypothesis (EMH) states that in a rational market, assets always trade at their fair value on exchanges. No market is perfectly rational, but how rational is the Bitcoin market?

We know the inflation schedule of Bitcoin in advance. That means that every participant in the market knows the reduction in liquid supply that results from a halving.

As this is public knowledge, the EMH states that the effects of the halving should be priced in before the halving actually occurs. In other words, the bullish price action that may occur before the halving will not continue after the halving completes. The venture capitals and institutional funds are now holding the bags of Bitcoin heavily. This is an indication of a far more rational market than ever before. So on the basis of that, how likely is it that the next halving will trigger a huge bull run?

The 2024 bitcoin halving date will be whenever the blockchain reaches a block height number of 840,000. This will lower the block rewards generation from 6.25 BTC to 3.125 BTC per 10-minute increment.  There are 300,000 blocks to mine before the next halving.  Let us review the history and celebrate the price fluctuations that are bound to happen.

What do you think about the 2020 Bitcoin Halving Facts? Please share your thoughts in the comment box below.