March 8, 2019, | AtoZ Markets – The Ethereum blockchain upgrades dubbed Constantinople and St. Petersburg Ethereum hard fork, have been activated as scheduled on block number 7,280,000 on Thursday, February 28th, 2019 at 19:57 (UTC). After the successful 2019 Ethereum Hard Fork, the rate at which new blocks of transactions are added to the ethereum blockchain is growing again. What else did the successful hard fork brought to Ethereum and can we expect more hard forks in 2019?

Ahead of the Ethereum Constantinople and St Petersburg hard fork, the crypto market was anxious and this reflected in the volatilty of ETH price. Yet, was the hard fork a success? Taylor Monahan, the CEO of a crypto wallet firm has previously explained the logistics that govern a successful hard fork. She noted:

“With the blockchain, everyone has to upgrade in order for everyone to be able to use features.“

Monahan added, that “about two weeks before the fork, everyone upgrades the software but none of the new features are enabled.”

“Then, on that block number, everyone at the exact same time starts using the new features. So, that’s how we prevent differing states from existing simultaneously,” the CEO of a crypto wallet concluded.

By the time of publication, Ethereum network the number of daily blocks increased by more than 1500 blocks within 24 hours. That proves that the updates, implemented as hard forks, were incorporated into the core network successfully. After two previous attempts of Constantinople code upgrade to be implemented this event is a relief to the entire community.

Has the Ethereum mining difficulty decreased?

The Ethereum Improvement Proposal (EIP) 1234, was activated as mentioned earlier last Thursday, was designed to effectively disable some of the code in software, known as a “complexity bomb,” for a period of 12 months. Intended to encourage the transition of the platform to a new, consistent participation proof algorithm (PoS), complexity bomb gradually increased the complexity of mining and slowed the creation of blocks from December last year.

The blockchain analytics site Etherscan reports that within just one day after the activation of the hard fork, the creation time of the ethereum blocks was reduced from about 19 seconds to 14 seconds. Currently, the hash rate of the ethereum network according to the ForkMon monitoring site is 132,986 GHz /s. For comparison, for those miners who are still transmitting hash power to the non-Constantinople and St. Petersburg activated the circuit, the total hash rate is 1777 GHz /s.

No fluctuations in the transaction’s volume detected after hard fork

As a result of the remaining hash capacity on the old version of the ethereum blockchain, since the activation of the hard fork on Thursday, a total of 19 useless blocks have been extracted, according to Martin Holst Swende, a security leader at the Ethereum Community Fund.

“These blocks were mined in the old chain of the main networks, probably without updating the miner’s software for the Constantinople fork, a waste of money,” writes Svenda in a public post GitHub.

The blockchain analytics platforms report that from the moment 2019 Ethereum hard fork was activated until today, there were no major fluctuations in the volume of the transaction or in the number of calls to smart contracts.

Major developers are currently awaiting a new EIP set for inclusion in the next hard fork Ethereum, Istanbul. However, the ethereum developers have not yet approved the schedule for it.

Nevertheless, the former developer Afri Schoedon suggested back in January a possible network activation in October of this year.

Preparation to the hard forks is getting harder

Taylor Monahan, the general manager of MyCrypto, noted in a recent interview that the preparation for the hard fork is becoming more difficult as the ethereum ecosystem expands to cover more companies, developers, and users. She said: “I always worry when there is a plug because there are so many moving parts,” said Monahan. “You have miners. You have equipment or components. You have Geth, Parity, Harmony and all the various client programs. You have exchanges, wallets and everything in between.

Monahan added: “there are many places where things can go wrong. ”

Similar concerns have also been voiced by large corporate companies that are considering how to expand their services to include the purchase and sale of ether.

According to the blockchain experts, the last activation of the hard fork on ethereum went relatively smoothly. Monahan confirmed that due to the numerous attempts at its release the majority of stakeholders in ethereum did not seem to struggle to update to the new software.

Although most of the nodes in ethereum have been updated successfully, it is important to note that a small but constant number of miners have yet to switch to the upgraded blockchain. With this small, but a select few, the security manager Ethereum Foundation Swende urges the switch through a public tweet: 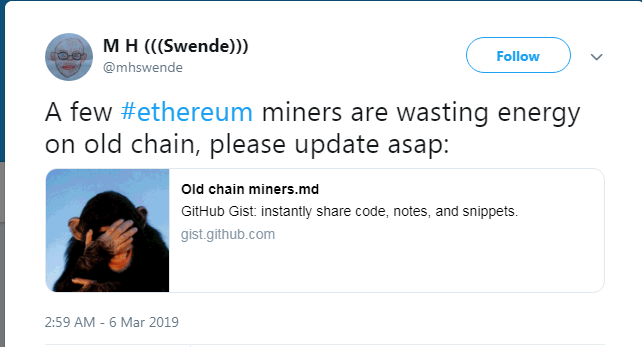 Tags Cryptocurrency News Ethereum Hard fork
Forex Crypto
Top 5 Forex Brokers
Top 5 Crypto Exchanges
Your subscription could not be saved. Please try again.
Thank you for subscribing. You will be the first to receive all the latest news, updates, and exclusive advice from the AtoZ Markets experts.
Everyone is reading
Is Forex Trading Halal or Haram in Islam?
Top 5 cryptocurrencies 2021 | Best Cryptocurrency To Invest
How to Setup Monero Mining in 2021?
close ×