Aeternity has gained over 70% in 2019 after an impressive run. What is the potential of this cryptocurrency in 2019?

April 09, 2019. AtoZ Markets – Aeternity (AE) was founded in 2017 by Yanislav Malahov based in Liechtenstein. Yanislov who famously called himself the ”Godfather of Ethereum” worked closely with Ethereum founder when the Ethereum project was still progressing. He left before Ethereum was formally named and later founded what he believed would be a better project. AE was born.

What is Aeternity (AE)?

AE is a decentralized and an open source cryptocurrency which utilizes the P2P technology. It uses the hybrid PoW and PoS algorithms and could basically do almost anything- has its own token, decentralized apps and smart contracts. It’s said to be faster and more efficient than other blockchains. Besides many other good features, AE is easily minable. It uses the Cuckoo cycle PoW algorithm like BitCash and Grin Coin. It uses more of computer memory than raw computational power. This makes mining possible on normal computers and not only on mining machines which acquire so much electric power. AE has so many other attractive features which have made its investors talk of a fierce competition with Ethereum, EOS and NEO in the nearest future. What are the prospects of AE in 2019?

AE is currently ranked 49 on Coinmarketcap with over $160 million in market cap and $39.5 million in trading volume. The crypto had a pretty good start and looks quite promising. The cryptocurrency market had a very good run in the second half of 2017 before collapsing in 2018. AE made a good run from late October 2017 when its market cap increased from over $62 million to nearly $700 million in late January 2018. At the same period, its price spiked over 700%. Despite the market’s bearishness, it continued upside and hit nearly $5 and over $1.2 billion in price and market capitalization respectively. However, it surrendered to the bearish market in May and dropped massively.

In 2019 so far, AE has gained over 70% to be among the top gainers. However, the price is still under a long term bearish pressure despite the current crypto market recovery. 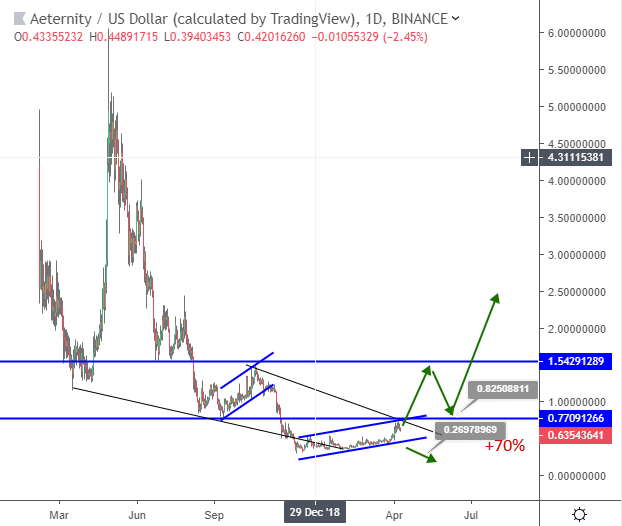 Price is currently just below a strong resistance level. A break above is needed before a big move upside would happen. A possible ‘head and shoulder’ bottom with neckline at 1.54 will be a big sign of recovery. However, if the price remains below 0.82 resistance, further dips might happen.