One of my predictions for the Fed, is when easing in financial conditions is sustained, they will tighten more. As a Chief Economist at TRADE.com, I have outlined my 2018 Fed rate hike hints and its impact on global markets.

Wall Street has rallied 5.1%. Bloomberg’s US investment grade corporate bond index through Thursday had tightened 16 bps on an OAS basis and high yield index 32 bps. The Fed’s broad-based DXY has dropped 1.6%. Implied volatility for Treasury yields as measured by the TYVIX (4.34 v 6.08) gauge of 10-year Treasury futures volatility has fallen 29%, and the VIX (11.25 v 12.67) has dropped 11%, both to within shouting distance of record lows recorded in the 2007 pre-crisis. Front-month oil prices are down 4.0%.

As of Wednesday, I calculated the cumulative impact of the change in financial conditions. Since the December FOMC meeting was 60 bps of Fed easing versus the 50 bps of Fed rate hikes. While that’s only grown in the 2 days since with the further drop in yields and the further decline in the greenback: 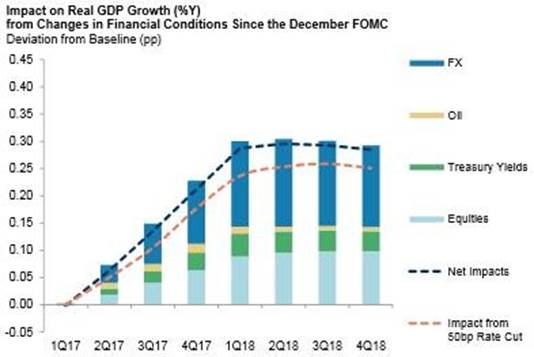 What does that mean for the Fed if it continues?

Well, it means that the Fed has to tighten more. Eventually if easing in financial conditions is sustained, Fed will tighten more. Hence, I continue to look for them to hike again on 14 June. With a total of EIGHT rate hikes from the December 2016 through the December 2018 FOMC meetings. That’s up from my forecast of 6 hikes over that period. As we began 2017 in large part because financial conditions have eased so much. Therefore, we see the Fed having to do more!

Ahead of the FIRST hike back in December 2015, New York Fed President and FOMC Vice Chairman William Dudley emphasized in a speech to the Economic Club of New York the “importance of financial conditions in thinking about the future path of short-term interest rates”. Along with the lessons the Fed learned from 2004-07 when they raised rates but did NOT manage to actually tighten financial conditions sufficiently and in 2008. When they cut rates massively but not nearly fast enough to offset the tightening in financial conditions. As Dudley (in particular) and other Fed leaders often stress, the fed funds rate itself just isn’t all that important. What matters is HOW changes and expected changes in the fed funds rate are broadly transmitted to the economy via shifts in broad financial conditions:

Fed should be getting more hawkish now?

I expect a tightening in financial conditions to follow – stocks are supposed to drop after a rate hike, rates to rise, and the greenback to rise – and when they cut rates they expect financial conditions to ease, “But the linkage is not stable and predictable,” and sometimes “the response of financial conditions can be much larger or smaller than anticipated for a given change in interest rates.” The Fed hiked rates 425 bps at 17 straight FOMC meetings from 2004-06. But “during this period, financial conditions eased … In hindsight, perhaps monetary policy should have been tightened more aggressively.”

So according to President Dudley’s framework, the Fed should be getting more hawkish now. Indeed, I had assumed the main rationale for the late signaling of the shifting forward after this week’s hike was to push back against how many financial conditions had eased in the aftermath of the December hike. The “fireside chat” with New York Fed President Dudley on Friday, 24 March, looks like the most important item on the upcoming week’s otherwise light economic calendar. The TIPS market will have to absorb supply at a re-opening of the 10-year on Thursday. Which doesn’t look like it should be a problem considering how well to breakevens have held up compared to the rally in nominals since the FOMC meeting.

About Bill Hubard and Trade.com

This analysis about 2018 Fed rate hike hints was provided by Bill Hubard, Chief Economist at TRADE.com. TRADE.com is a trade name operated by Leadcapital Markets Ltd. Which is authorized and regulated by the Cyprus Securities and Exchange Commission, license number 227/14. Leveraged trading in foreign currency contracts, contracts for difference or other off-exchange products carries a high level of risk and may not be suitable for everyone. There is a substantial risk that you may lose all of your initial investment. We advise you to consider whether trading leveraged products is appropriate for you in light of your own personal circumstances.