Trading opportunities in the coming week, start with our weekly high impactful fundamental news for week 6. With executive orders being signed to dismantle the previous US administration decisions. What can we expect next for the US Dollar? Bullish or Bearish?

5 February, AtoZForex –  US President holds his continuing unpredictability.  With the initial challenge on the travel ban being temporarily revoked. Will POTUS accept the outcome of the judiciary decision? Senior Republicans concerned on the relationship with Putin? With Dodd-Frank possibly out of the way, what does it mean for forex traders?

We try to unravel the coming week and give insights on trading opportunities. With EU leaders rejecting the need for UK PM Theresa May becoming a go between Europe and USA. One EU leader has been reported to have said, we do not need UK PM as a mediator, we can always tweet POTUS.

Expect GBP to be impacted mainly from news from the Australia, China and USA.

For next week, our Fibonacci levels are remain set between low of 1.1855  to the high at 1.2946. GBP has been trading sideways between these two levels. Neither one of these levels have been as yet tested since September 2016.  (The Fibonacci levels are drawn in accordance with the teachings of Yagub Rahimov and not the conventional way). On the weekly chart we can clearly see price making higher high’s and higher lows.  Which indicates further upside move is possible, with resistance levels at 1.2745,  1.2815-20 (near 10.0% Fibonacci retracement level) and 1.2950.

Last week we saw price test the 1.2690  level (23.6% Fibonacci retracement zone) and drop well below the 1.2530 level (38.2% Fibonacci retracement zone) to 1.2459 level.  From indicators perspective, both the 20sma and 100sma are sloping down.  MACD histogram is in the negative territory, with the MACD signal indicating a bullish move. RSI is in the sell zone currently.  We have a mixed signals. 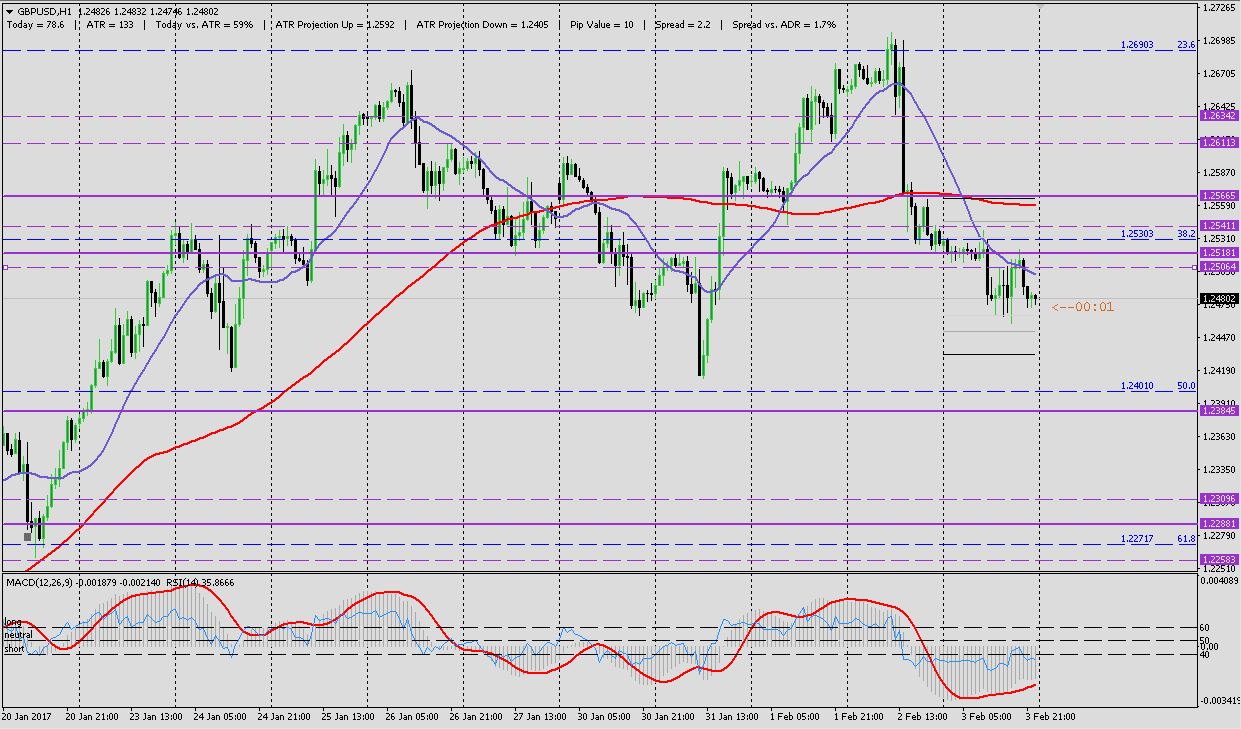 Our outlook on EUR has not significantly changed. It remains US dollar driven and with ECB’s dovish position of a wait and see policy previously reported, bias for this pair is bearish.

Unless, price clearly breaks and remains above the 1.1715-20, we would shift our long term bias to the upside.

These are reasons for the mid-long term short position. Unchanged from last week. 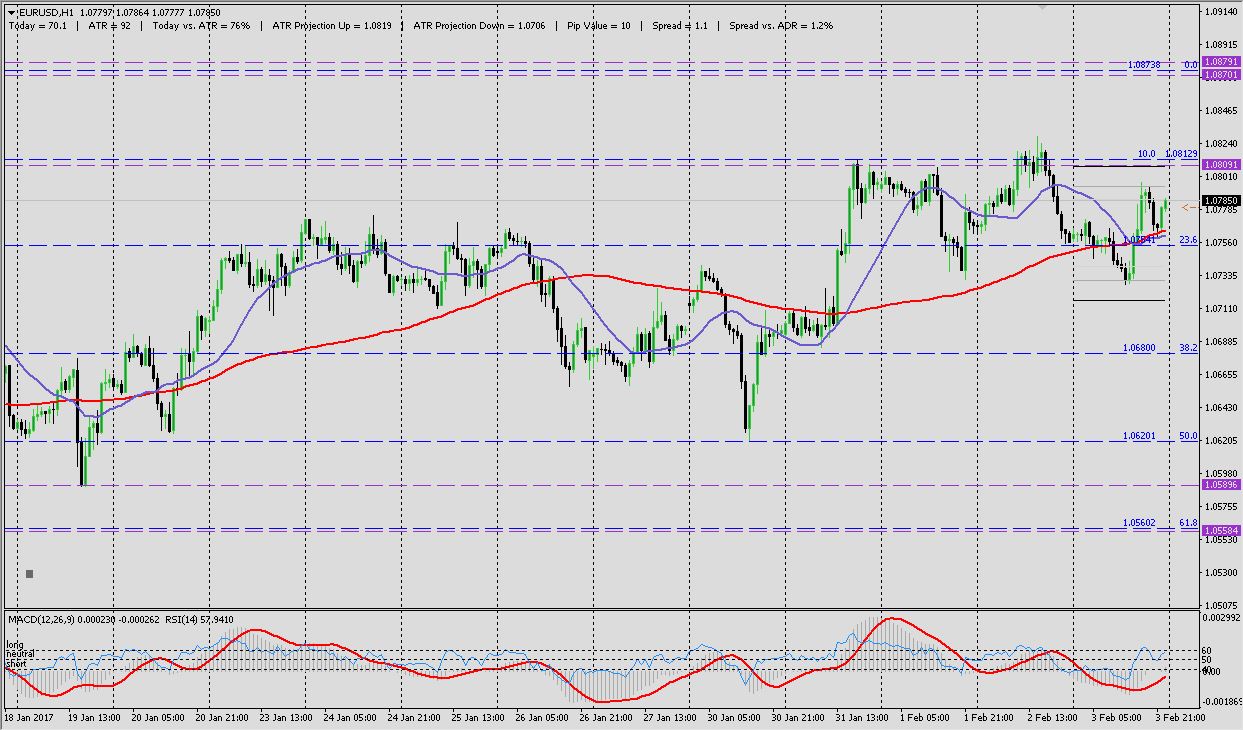 On the hourly chart, last Friday price rebounded to the upside from the daily support at 1.0730 level to break through both moving average to touch a high of 1.0797, respecting the 1.0800 psychological level. Price slid tested the 100sma and closed at 1.0785 level.

Two and half weeks into President Trump’s rule, with tweets, sackings, challenges and executive orders. What can the markets expect? Will Japan continue to be USA’s trading partner, with Japanese PM Abe to lean on how many jobs have been created in the US by Japanese companies. US Tech CEO’s very unhappy and affecting their workforce. Will companies move operations overseas? More challenges for POTUS in near future?

Although not high impact, traders must be aware of the following event,

The USDJPY continued to the downside closing below the weekly 100sma and currently just above the 50% Fibonacci retracement zone.  Price is sandwiched between the two weekly moving averages.  However, the current pullback from the highs of 118.66 could be part of a deeper pullback to the 109.25 level at weekly 61.8% Fibonacci retracement zone before rebounding to the upside. 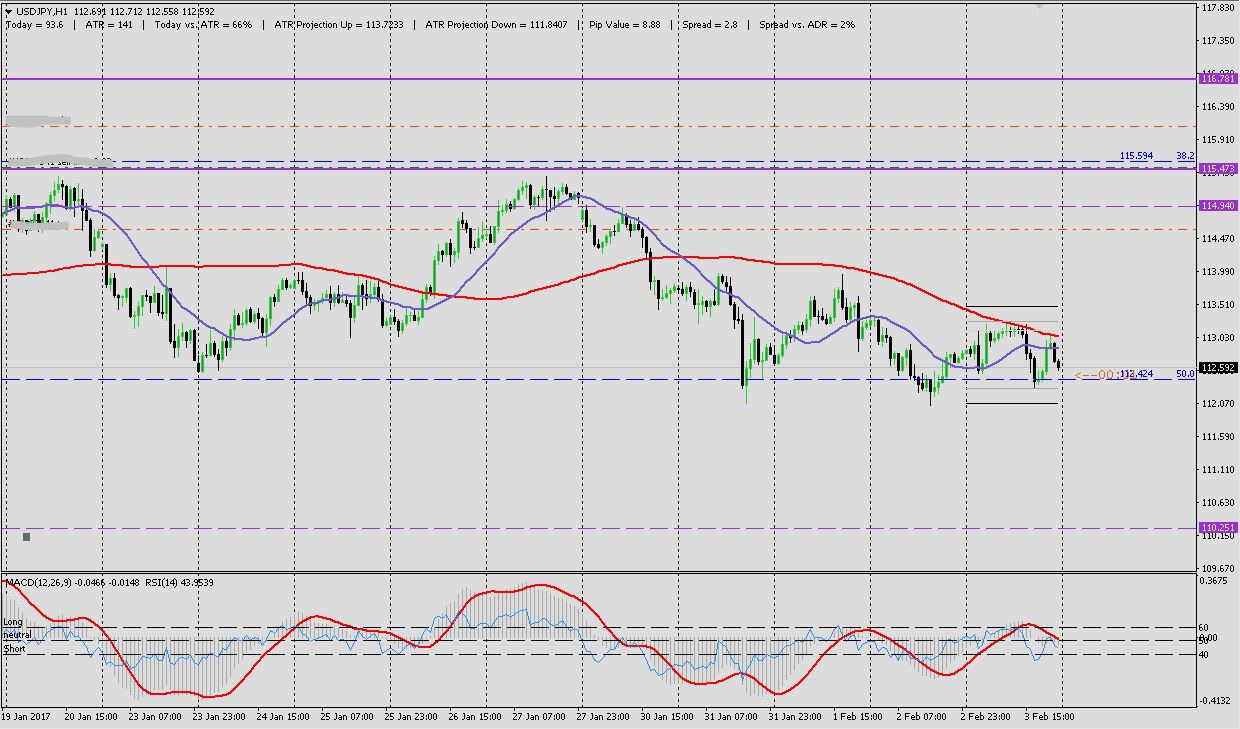 On the hourly chart, price is below the 20sma and the 100sma in a bearish direction. As reported last week of a possibility of another opportunity to short the pair at 115.50-55 level.  However, price fell short of our SELL entry by 12pips. Also as expected, we saw a clear break of the 114.00 level and 113.80 levels respectively. Price respected the 50.0% Fibonacci retracement zone as it rebounded for a low of 112.05 level.  Provided the 113.25-30 area remains intact, we can expect further bearish movement.

On the bearish side,  a clear break below 112.05, we could see price move to the downside to the 110.25 level.  For short position wait for a re-test of the 50% Fibonacci retracement zone.