In the first week of Donald Trump’s presidency, the executive orders have been the main talk of the markets. What are the implications for USD? Bearish or Bullish? Our weekly high impact fundamental news for week 5 will prepare you for the unpredictable.

27 January, AtoZForex – Now the executive orders are signed, the easy part is done and the real work starts. Yet, the trump card the US President hold’s is his continuing unpredictability. Will senior republicans keep the President in check? With Mexico refusing to pay for the wall, will there be more burden on the American tax payer? Who is going to build the wall, companies affiliated to the Trump organisation?

We try to unravel the coming week and give insights on trading opportunities. After UK PM’s meeting with the US President, has a trade deal been decided? Focus remains on USA policies both domestic and overseas. Impact on the US Dollar, will markets push the dollar south or north?

For next week, our Fibonacci levels are set between low of 1.1855 (corrected from 1.1853) to the high at 1.2946 (corrected from 1.2949). GBP has been trading sideways between these two levels. Neither one of these levels have been as yet tested since September 2016.  (The Fibonacci levels are drawn in accordance with the teachings of Yagub Rahimov and not the conventional way).

Last week, we reported that after GBP bounce back from the low of 1.1987, few pips above the 88.1% Fibonacci retracement zone and this week as expected we saw USD weakness as GBP climbed on the upside. GBP touched a high of the week at 1.2773 after breaking through the 1.2415 resistance level. Just 15 pips short of the 23.6% Fibonacci zone at 1.2688 level.

The reasons for going short 1.2518-30 level of last week was realized. Currently, we have a hourly descending trend line that has been tested (and time of writing was being tested) at 1.2560 resistance level. For next week, bias remains on the bullish side, with a lot of whipsaw action due to key high impact news next week. For next week, we would be looking to short from the 10% Fibonacci zone at 1.2815-20 level, with a deep pullback to the 1.2530 level. 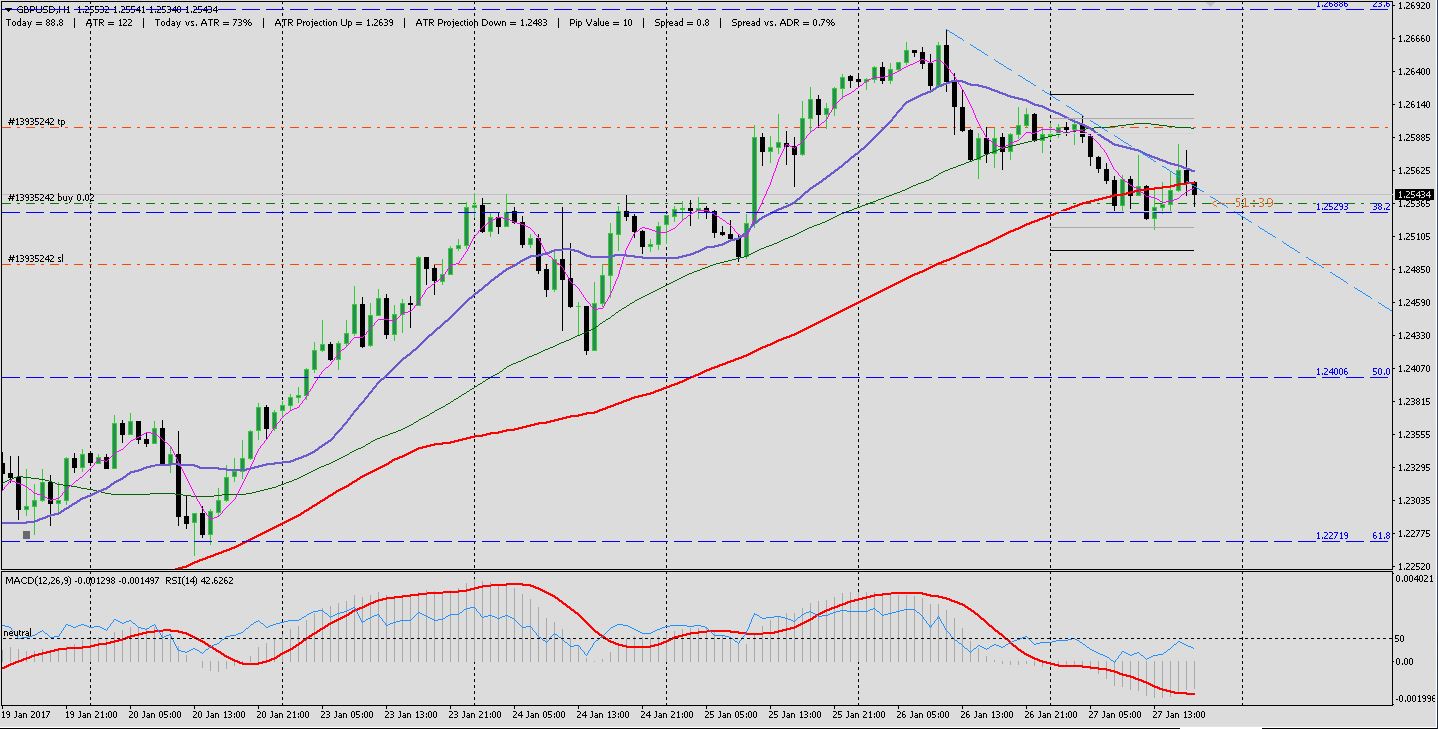 Our outlook on EUR has not significantly changed. It remains US dollar driven and with ECB’s dovish position of a wait and see policy reported previously, bias for this pair is bearish.

Why 1 remain with a short on EURUSD in the mid-long term?

Unless, price clearly breaks and remains above the 1.1715-20, we would shift our long term bias to the upside.

These are reasons for the mid-long term short position. Unchanged from last week. 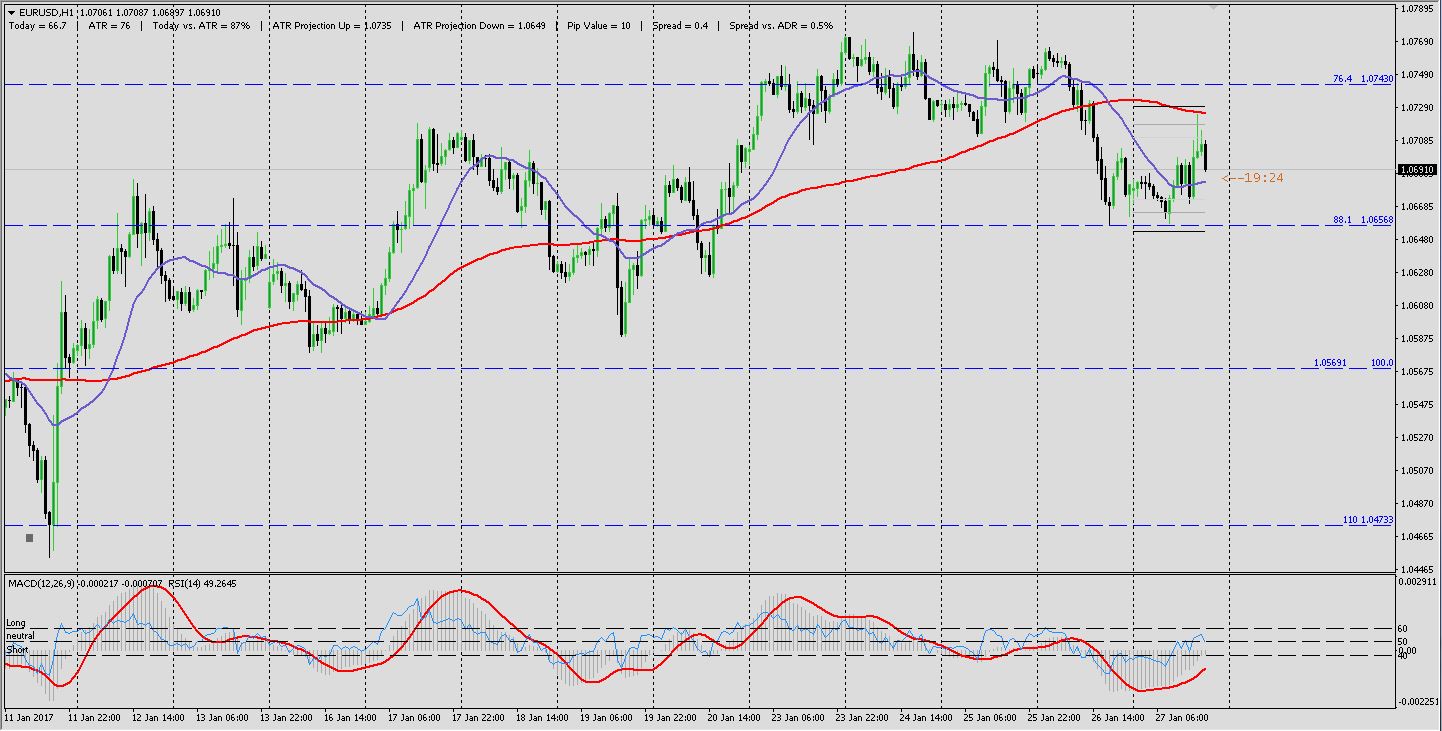 On the hourly chart, as we write price currently is bouncing between the hourly 20sma and 100sma. If price breaks above the 1.0725 level, further move upside would meet strong resistance at initially 1.0770 level and then at the 1.0850 level. MACD histogram is just above the neutral level, with the signal line sloping up, while RSI is in the neutral zone at the 50 level.

President Trump has completed the first week in the White House. He has signed several executive orders, ensuring he pushes his election pledges through. Meeting with US company CEOs and a push to drive manufacturing back into USA. As mentioned last week, a protectionist policy will come into effect in the first year of the new presidency, if not sooner. With many policies lacking details, the presidency is still in the honeymoon period.

The JPY lost some of its strength this week, as the USD gained some of its earlier losses in the week. The greenback seems to be ending the week on higher note for the second week in a row (at time of writing). However, the current pullback as mentioned last week could be part of a deeper pullback to the 109.25 (corrected from 110.25) level at weekly 61.8% Fibonacci retracement zone before rebounding to the upside. 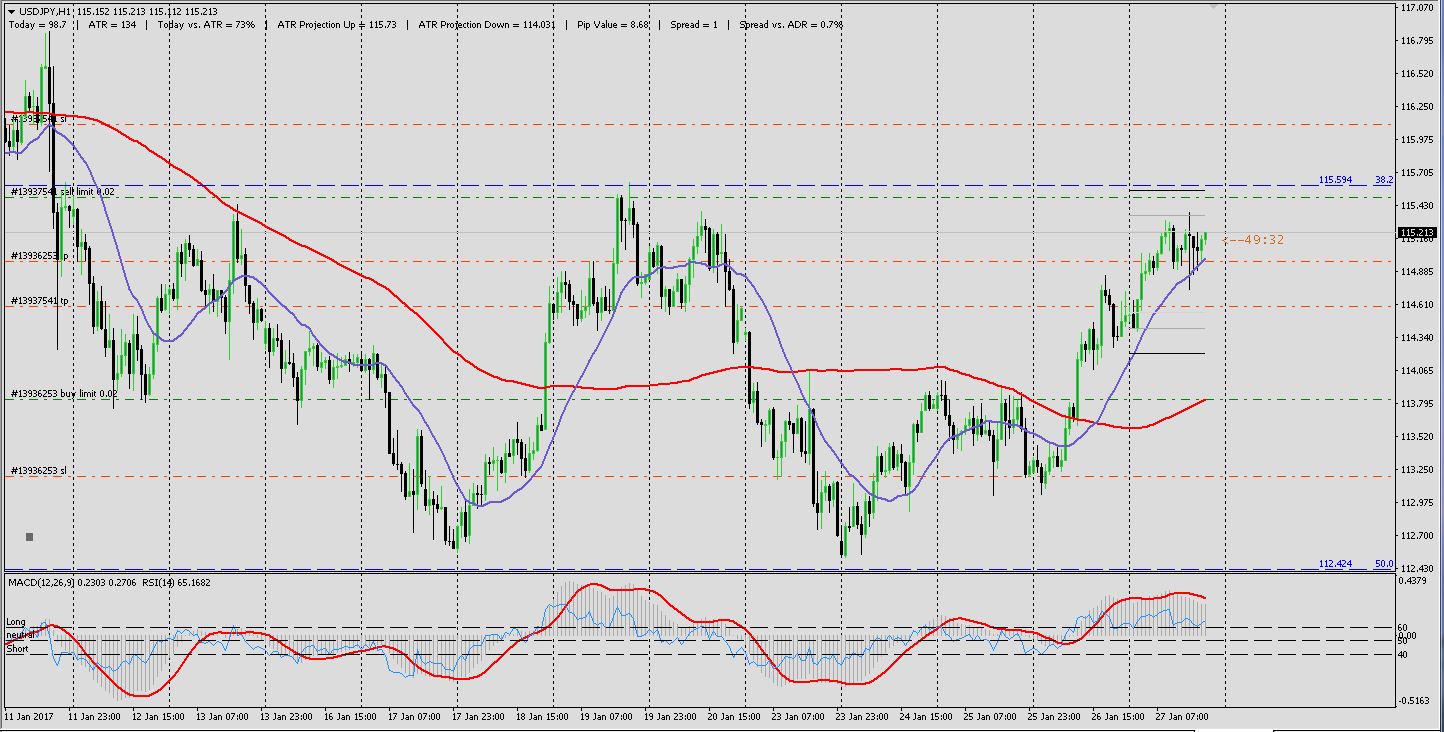 On the hourly chart, price is above the 20sma and the 100sma in a bullish direction. Last week price retested the 38.2% (115.59) Fibonacci retracement zone and reversed to the downside. We have another opportunity to short the pair at 115.50-55 level. For a sustained move to the downside, we would need to see a clear break of the 114.00 level and 113.80 levels respectively.