2017 Week 3 – Weekly High impact fundamental news  for the week ahead of January 16 to 22. Start the week with key upcoming news and fundamental developments. This is USA Presidential Inauguration week, with President -elect Trump formerly being sworn in. Good or bad, the next four years are going to be a testing time for the world.

15 January, AtoZForex – A look ahead of the new trading week with the focus on high impact fundamental news. Last week was dominated by Trump’s press conference.  The greenback rallied going into the conference only to depreciate later on, what turned out to a disappointing conference from a policy perspective.This coming week will be focused on UK PM Theresa May, ECB President Mario Draghi and FED Chair Janet Yellen. What can markets expect? Bearish EUR or GBP?

AtoZForex note: Two key public holidays in USA that traders should be aware of

On Monday, with USA on holiday, it will be a rather quiet day and would be a day for scalpers in the relative calm of the markets, with no high impact news, until the end of the day.

On Monday, at the end of the day, BoE Governor Mark Carney is Due to deliver a speech titled “Policy Issues Affecting the Bank of England” at the London School of Economics. Expect a reaction going into Asian session and on Tuesday. Markets will be looking out for any hawkish statements during the speech especially as it comes a day ahead of UK PM speaking on Tuesday.

Early morning at 09:30 am GMT, we have the CPI (y/y) data, markets expect increase of 0.2%, which would be good for GBP and expect it to appreciate. However, markets will be focused on Theresa May‘s speech later in the day (time not clear).  With the UK Supreme Court decision still pending, I expect a overall Brexit policy plan without any details to be shared at this stage.  If no details are shared, expect GBP to depreciate on intra-day.

For this week, our Fibonacci levels are set between the two weekly bearish candles from the low of 1.1853 to the high at 1.2949 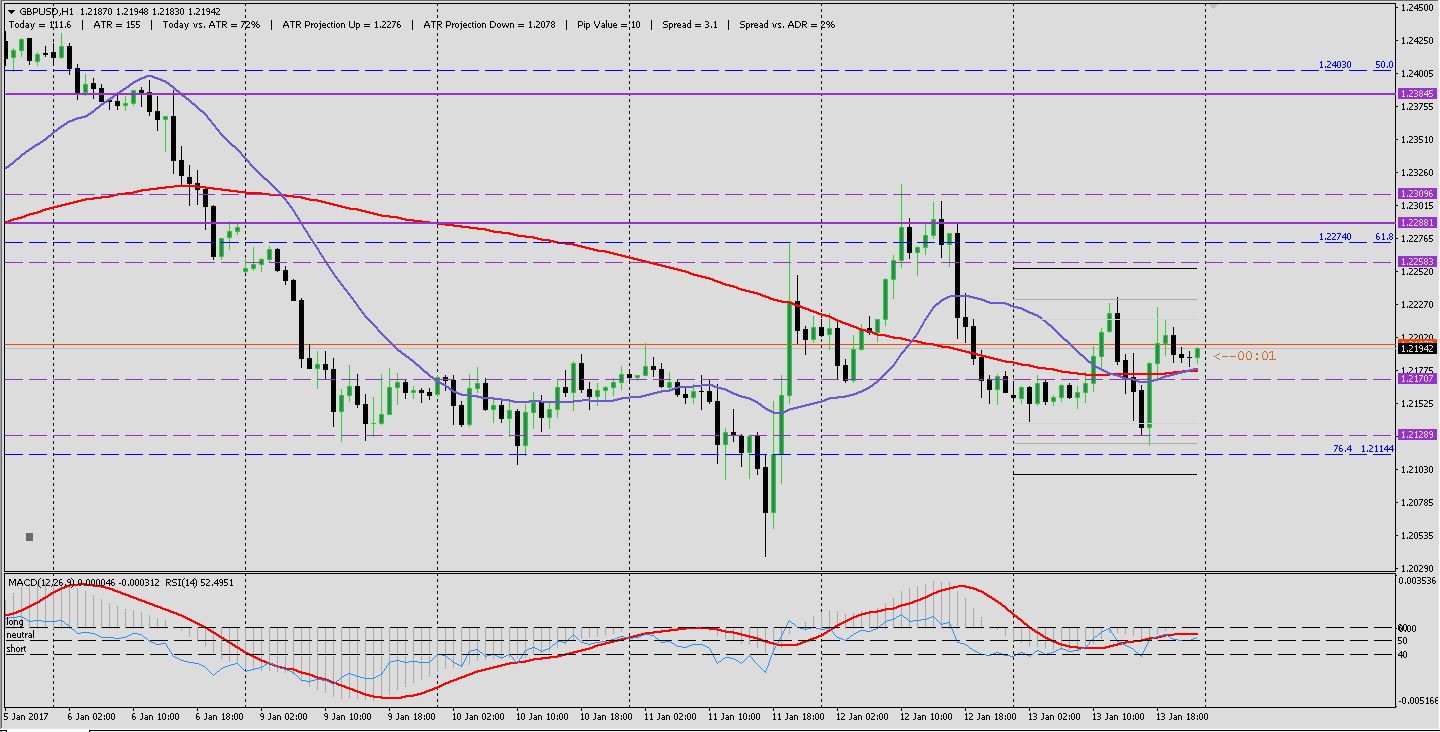 GBPUSD Hourly Chart(click to zoom in)

From technical analysis perspective,  GBPUSD traded on Friday 13 between high of 1.2232 low of 1.2121 levels. Price is currently between our weekly Fibonacci retracement zones of 61.8% and 76.4%.  Currently, there is no clear direction on intra-day and bias is neutral on this pair. Supported by price trading both above and below the 20sma and 100sma.  On the upside a clear break above the 1.2270-75 level could see further bullish movement in the next few days. On the downside, a clear break below 1.2110-05 level on 76.4% Fibonacci retracement zone we can expect further bearish development to the 1.2035 level.

TradingDoc: Traders should note that last week the 1.2200 level broke to the downside and overall bias is on the bearish side. There is a key major support level at 1.2000, which is a key psychological level. Price could rebound to the upside from here. Expect further bearish movement on a clear break of this level exposing price to move to the 1.1983 level also a 88.1% Fibonacci retracement zone.

At 09:30 am GMT, we have the Retail Sales data, could be another catalyst for the GBP to move on the upside, currently, markets expect decrease in retails to -0.1%.   Certainly one to watch.

This week focus will be mainly on the ECB news conference on Thursday. Last week was a bullish week for the EURUSD.  The EUR is US dollar driven and US data later could act as the fuel for clear EUR direction.

Apart from the ECB press conference, we expect other economic data from Germany (ZEW Sentiment) and the Eurozone inflationary data. Expected to remain at 1.1%.

ECB is expected to be dovish, even with improved inflationary data to 1.0%. President Draghi will take a position of no change in its long term policy, and state ECB does not react to a single inflation figure, in line with last week’s views from Executive board member Yves Mersch. Expect EUR to depreciate as ECB sits on the sidelines. 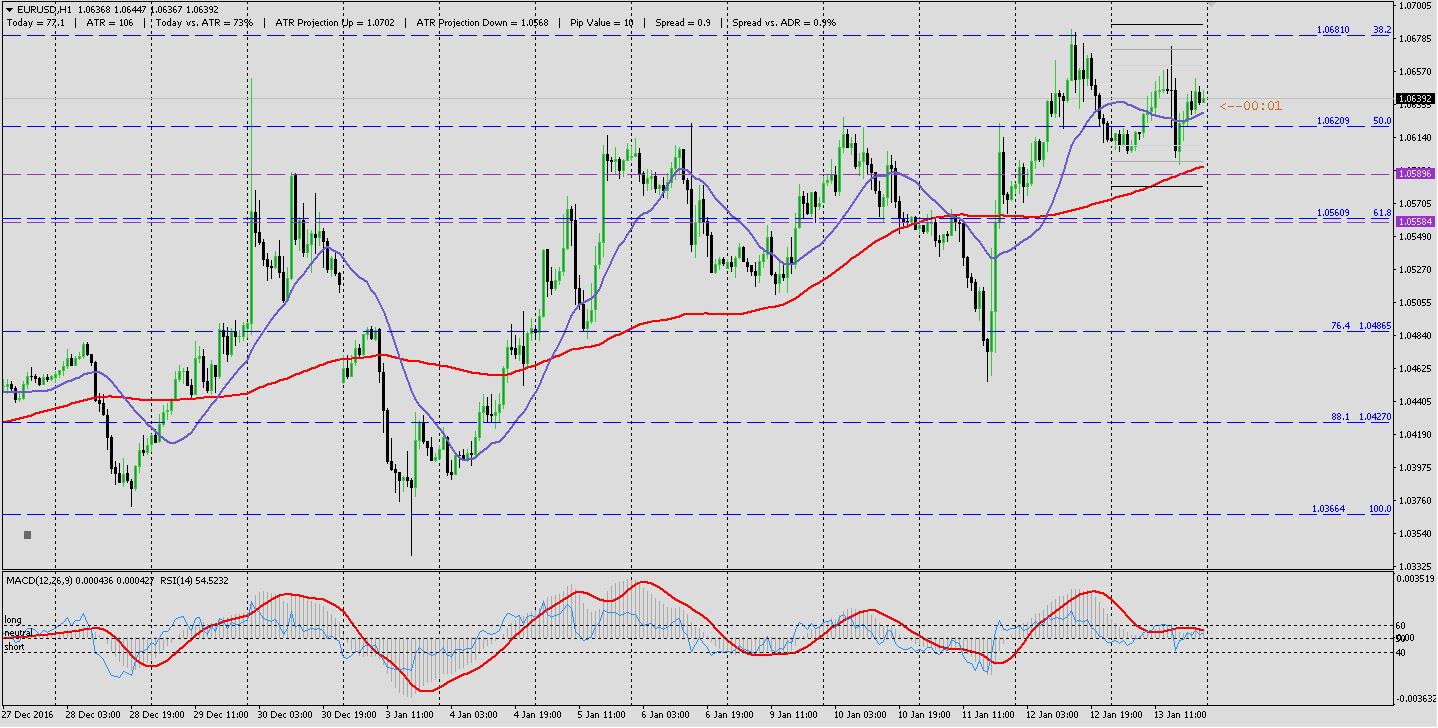 EURUSD Hourly chart(click to zoom in)

Last week EUR broke through the 1.0600 psychological level towards the upside. On the hourly chart we have price trading above 1.0620 our 50% Fibonacci retracement zone. On the hourly chart, we are bullish EUR, however we could see a test of the 1.0595-90 level before continuing to the upside.  Our initial target would be 1.0850-75 zone. Once price breaks through the 1.0590 level, we could see price move towards the 1.0475-50 levels with potential further target at 1.0427 our 88.1% Fibonacci retracement zone.

This week the USA there are two key public holidays, Martin Luther King Day (Monday) and President’s Day (Friday). Although, the main focus will be the Presidential inauguration, there are a number of key high impact fundamental news that will impact the USD.

Most of the high impact fundamental news impacting this pair will be coming out of the USA rather than Japan. Last week the JPY strengthened, however this week the JPY could be impacted by the economic data coming out of Europe,  especially the ECB press conference. Also, with Janet Yellen speaking twice this week we can expect some volatility for this pair.

Although not categorised as high impact fundamental news event, traders should be aware of FOMC Member Dudley due to speak about “consumer behaviour” at the National Retail Federation conference, in New York.

UK PM Theresa May speaks to hopefully give insight into UK’s Brexit plan.

We have the USA inflationary data both the

* Core CPI m/m, expect to remain the same and

* CPI m/m expected to rise by 0.1% from previous month

* at 8:00pm GMT, we have Fed Chair Yellen speaking at the Commonwealth Club in San Francisco.

We have the following economic data

* Unemployment Claims (expected to show an increase from last week)

Presidents’ Day – the world will witness the inauguration of President elect Donald Trump. There are two other events traders should be aware of,

The Fibonacci retracement zone is drawn from the low of 99.00 to the high of 125.85 on the weekly chart.

The JPY strengthened last week against the greenback, with a number of key high impact fundamental news, already mentioned above, we could see further weakening of the USD.  However, the current pullback could be part of a deeper pullback to the 110.25 level just above the weekly 61.8% Fibonacci retracement zone before rebounding to the upside. 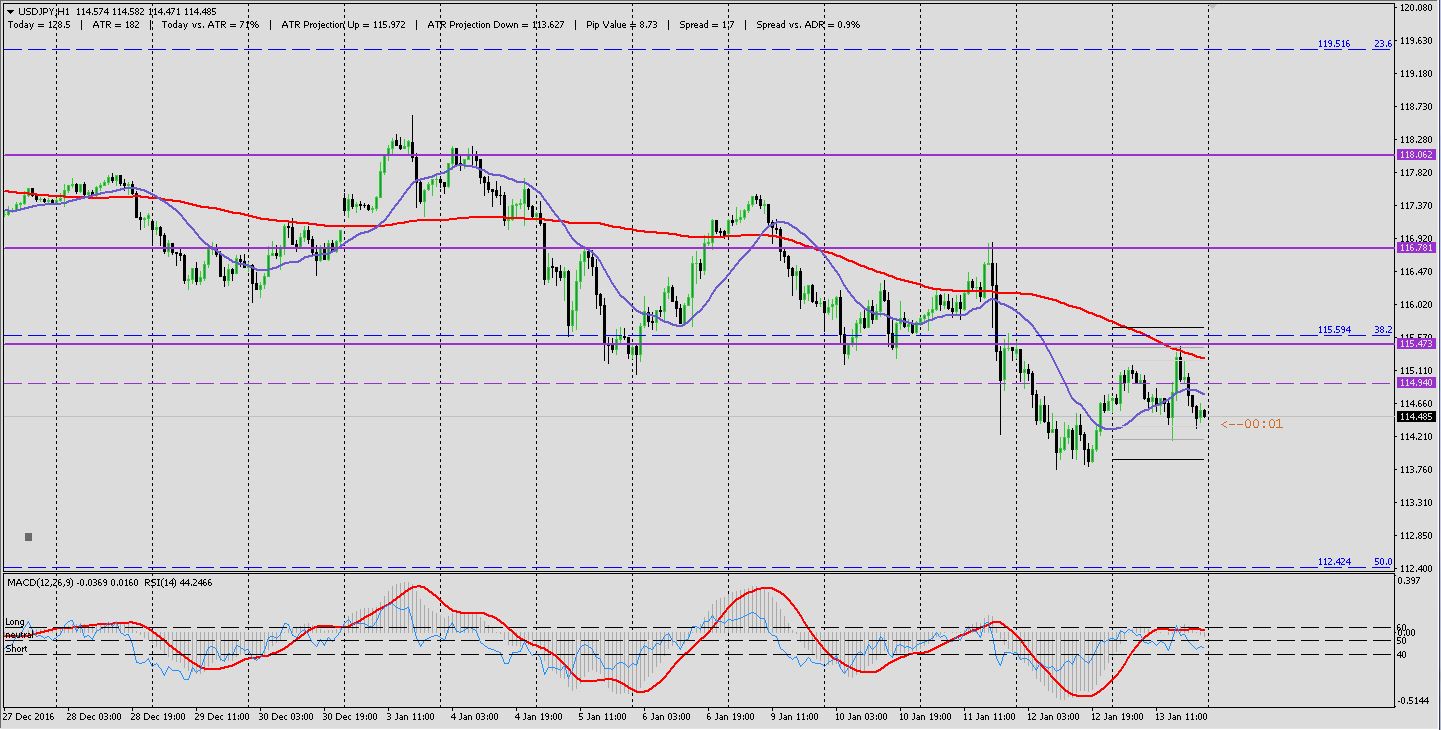 USDJPY Hourly chart(click to zoom in)