8 May, AtoZForex – This Thursday, markets are expecting the Bank of England (BoE) to predict steady economic growth for the current year. Moreover, market consensus sees the UK GDP rebounding from the sluggish start of 2017.

On the 11th of May, Mark Carney will be speaking on the latest UK inflation report. This report is reflecting the growth of the bank and the forecasts for inflation levels. Moreover, inflation report is presenting the risks to the UK economy.

In addition to the inflation report, markets are expecting BoE’s decision in regards to the interest rates. Also, the BoE Monetary Policy Summary report is due this Thursday.

Bank authorities’ forecasts were slightly wrong about the UK economy growth in 2016. Initially, after Brexit referendum took place in June 2016, officials have been prediction the sharp slowdown in the UK economy development. However, after the UK showed some potential, BoE members changed their mind. They lifted their expectations in November and February, as the UK economy advanced quicker than expected.

Below, see the chart of the UK Q-o-Q GDP growth. 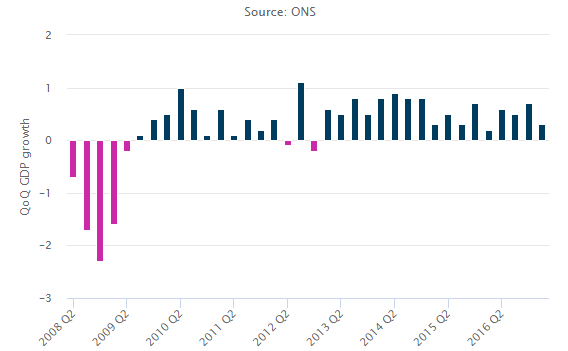 Yet, the continuous rise in the employment and the strong UK services sector metrics impacted economists’ beliefs. They now thought that the poor numbers were just a random deviation from the normal trend.

However, financial experts are not this optimistic, when looking further in the future. Forecasts for 2018 show that they anticipate a slowdown in the UK economy growth in the upcoming year. The experts have decreased their 2018 UK economy growth forecasts from 1.4pc to 1.3pc.

These two conflicting forecasts are mirroring the difficulty of analyzing the market situation in the UK. For instance, Visa’s consumer spending index, household spending growth slowed down in April. The figures came at 0.5pc, down from 1pc in the 12 months to March.

On the other hand, business confidence data is on the rise. The Institute of Chartered Accountants in England and Wales’s (ICAEW) index has entered the positive territory for the first time since mid-2016. The ICAEW’s director of business Stephen Ibbotson has stated:

“It’s encouraging to see that confidence is starting to rise after a sustained period of decline.”

The overall financial and business environment is advancing across the UK. The information technology, manufacturing, and utility sectors are also on the rise.