Kyber Network has lost over 110% since February in a free price fall. What should we expect in the coming days? The following 2 March Kyber Network price prediction is based on Elliott wave theory.

Technically what should we expect next? The chart below shows a declining impulse wave. 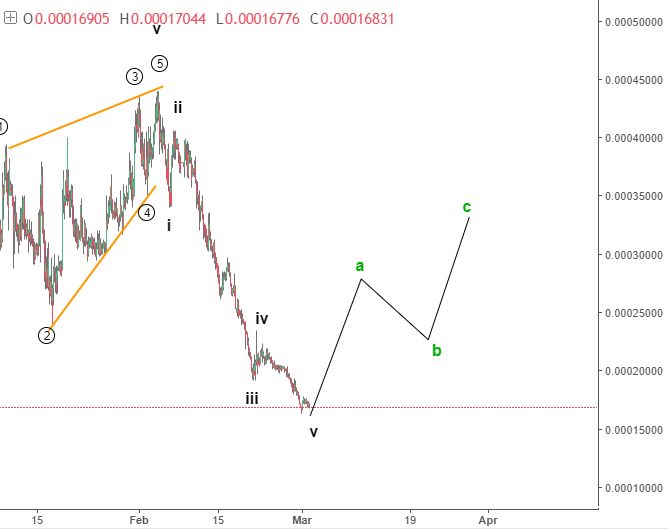 The chart above shows price peaked on 4th February with an ending diagonal pattern. The ending diagonal pattern was at the end of an impulsive wave rally that started on 13th December. According to Elliott wave theory, price should make a 3-wave decline after a motive/impulsive wave rally. It's no surprise that the Crypto market dropped after such a rally toward the end of 2017. At the lower time frame, another impulsive wave decline is happening on KNCBTC. A 3-wave bullish correction should at least be expected. If this happens, a rally to 0.00033 will be seen in the coming days especially if there is a good momentum (bullish trigger). Elliott wave helps to prepare before a big move starts. We will make an update however price behaves in the coming days or weeks. Stay tuned.

Kyber Network is a decentralized exchange for cryptocurrencies.