Funfair has gained about 15% in the last 24 hours. Will this move lead to a much bigger rally or price will decline further? The following 2 March FUNBTC price prediction looks at an almost complete wave pattern that could lead to opportunity for Crypto traders.

02 March, AtoZForex –  Funfair is the 70th best rank on CoinMarketCap. It gained 5800% from December low (3 cents) to January high (18 cents). Market cap and daily trade volume also increased significantly during this period. FUN couldn’t sustain the profits in January. It crashed back to the 8th December 2017 low losing 78% of the December-January strong rallies. The market cap and daily volume also dropped to $176 Million (from $782 million) and $5.5 million (from $133 million).

Price which traded at just 4 cents on 4th February after the strong decline has gained a bit. FUN is now trading slightly above 6 cents (0.0000057). Will price crash to zero or rally? The chart below shows an imminent diagonal pattern about completing. This could lead to 100% or more rallies once the pattern completes. 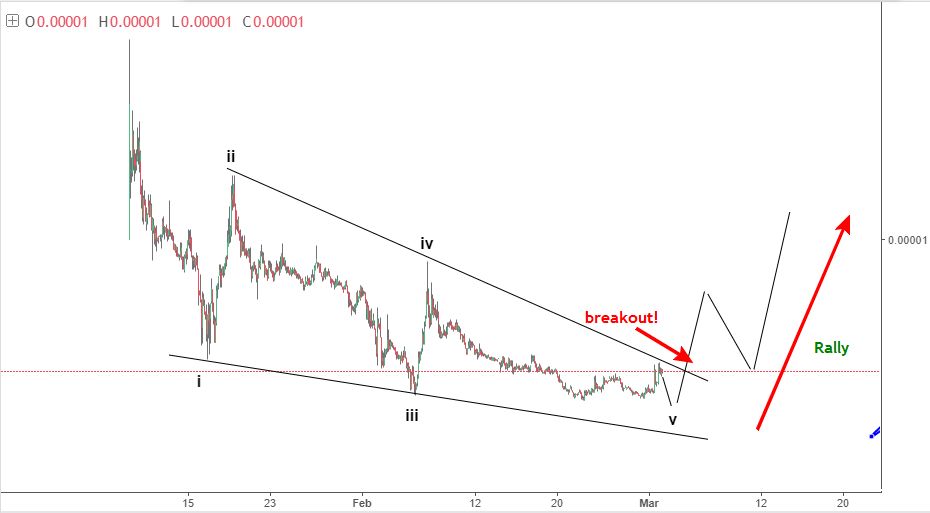 Elliott wave discusses about diagonal pattern as a reversal pattern. They are often seen at the end of a trend or correction. At the end of this pattern, price often breaks out with a strong momentum. Diagonal patterns are motive waves. They can occur in wave 1, 5 of a trend and wave C of a correction. In this case, the expected move is bullish. Price may not drop to the wave 1-3 support line before breaking upside (it does, more often than not). If this happens as expected, about 150% rally could happen. We could see FUN trading at 12 cents. FUNBTC, on the other hand is likely to gain 10000 satoshis to 0.00010777.

FunFair Technologies was created in 2017 by British technology entrepreneur and investor Jez San. Headquartered in Singapore with related companies in London, Malta, Gibraltar and Guernsey, FunFair is building a game-changing B2B platform using pioneering blockchain technology to bring transparency, efficiency and access to new markets to the casino sector.