Asian stock markets moved broadly higher, with Australia’s ASX outperforming as investors piled into miners and banks. What else will appear as major market movers today? Let’s find out with this 17 October Market moving fundamental events analysis from HotForex.

17 October, HotForex – So Australia’s hot streak continued with a more than 0.7% rise, while gains elsewhere were more muted as concerns about North Korea emerged and markets speculate about a more hawkish Fed post Yellen. North Korea warned that a nuclear war could “break out any moment”. 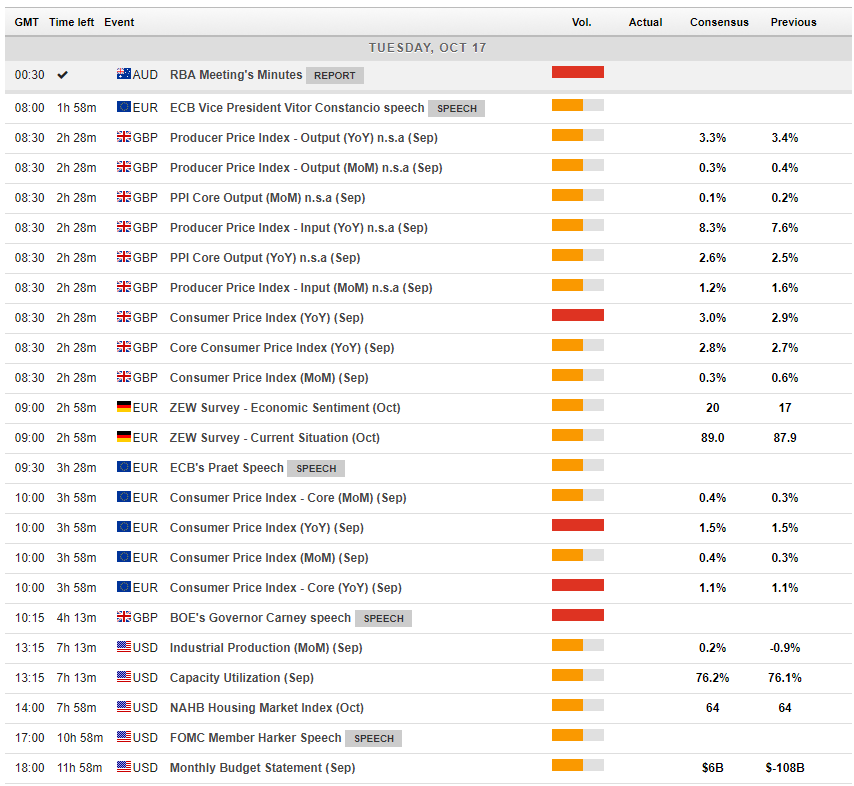 U.S. and U.K. stock futures are narrowly mixed. May’s visit to Brussels yesterday doesn’t seem to have brought a major breakthrough while in Spain the situation is tensing up after Madrid prepares to replace Catalan security officials after the leaders of two grassroots independence groups were jailed yesterday.

Amid ongoing political tensions the European calendar is heating up, with U.K. inflation data for September as well as German ZEW investor confidence and final Eurozone September HICP numbers.

The dollar has continued to trade perkily. USDJPY flipped back above 112.00 as major Asian stock indices hit 10-year highs after Wall Street hit fresh record highs on Monday. The pair has a well-established tendency to correlate with notable moves in global equity markets, though persisting concerns about political disharmony in Spain and North Korea (Pyongyang threatened nuclear war could “break out at any moment”) may have been curtailing yen losses.

EURUSD declined for a fourth consecutive session, this time logging a out a one-week low at 1.1756. The dollar also held firm against the Australian dollar and other dollar-bloc currencies, along with sterling and other currencies.

Sterling for its part has seen little reaction thus far to the news that British PM May and EU Commission President Juncker agreed at a supper meeting last night that Brexit negotiations should “accelerate over the months to come.”

This article about 17 October Market moving fundamental events was written by Andria Pichidi, Market Analyst at HotForex. The provided article is a general marketing communication for information purposes only. It does not constitute an independent investment research. Nothing in this communication contains an investment advice or an investment recommendation. It also does not contain a solicitation for the purpose of buying or selling of any financial instrument.