The Euro has been on a fast rally since last week after the French election ended with price taking a dip. Our Forecast prior to and after the election could have helped guide your decision on this currency pair. What next should be expected based on 17 May EUR USD Elliott wave analysis.

17 May, AtoZForex - Prior to the election, it was expected that if the new French President Macron won, price would rally fast. Otherwise a fall was imminent. This thought was linked to the clear difference between their policies toward the EU. Macron to remain and the other to exit. Macron won and the rally didn't come as expected, infact price dipped after a small opening gap. After the election, we drew two scenarios with the second more preferred. The two scenarios pointed at 'rally after dip', one deeper than the other. There was also a clear distinction between these two. The second eventually played out almost perfectly - giving a bullish forecast after which price headed up. the chart below was used. 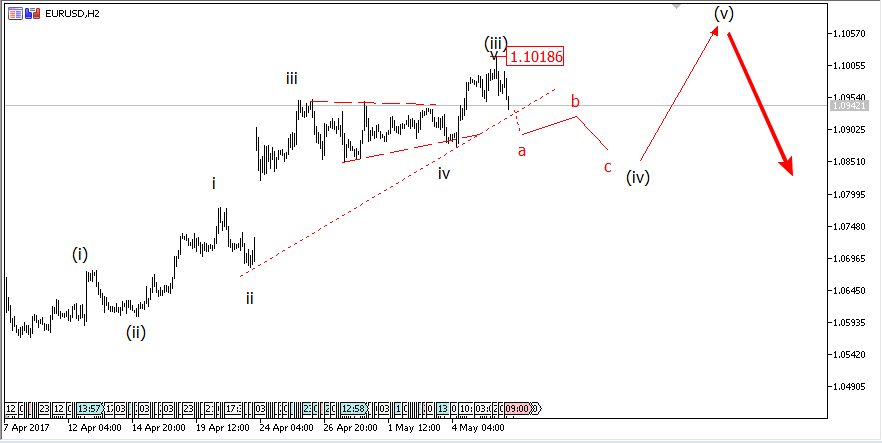 This chart above shows an incomplete impulse wave. The dip could be the 4th wave thereby giving more bullish opportunity before the bearish reversal.

How do we distinguish between these two scenarios?. The first scenario be validated by a sharp break below 1.085. If the dip looks sideway or shallow, there are chances that the second scenario will be preferred. More updates will come later.

Price was resisted by 1.085 to invalidate the first scenario. As soon as price showed bounces off 1.085, the second scenario was set in place and was fully preferred. Price has since rallied and move broke above 1.1018 top - more than 250 pips from 1.085. This type of perfection doesn't happen all the time but they often happen as proved on this platform. What is the present wave analysis?

17 May EUR USD Elliott wave analysis: what next? 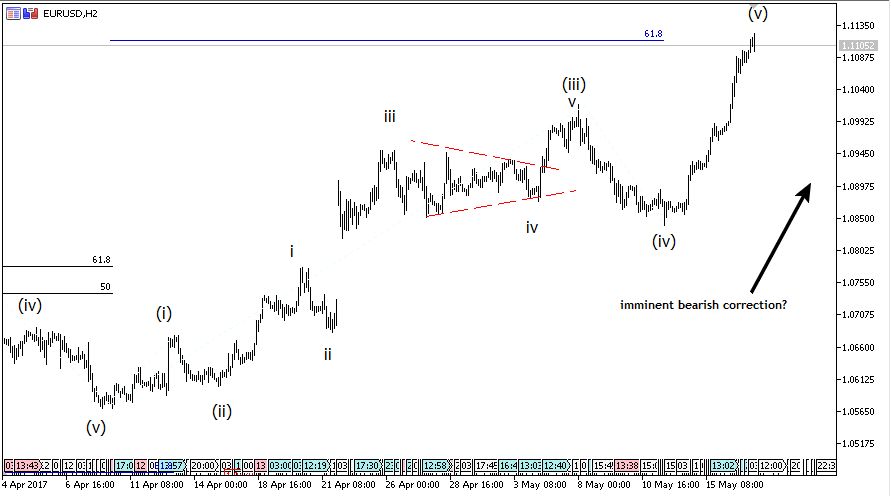 It looks like the impulse wave is completing the last stages before a big bearish correction. There is a strong likelihood that the present cycle is a bullish one which will continue after the bearish correction. Price is at a good reversal level. Price should show reversal signals like divergence, bullish engulfing on the daily chart etc before considering taking it down. There is no reversal signal to support our bearish claim yet and price may still rally further until then. But the bears are knocking. More updates will come later. Stay tuned.